1 And the men of Ephraim gathered themselues together, and went Northward, & said vnto Iephthah, Wherefore passedst thou ouer to fight against the children of Ammon, and didst not call vs to goe with thee? Wee will burne thine house vpon thee with fire.

2 And Iephthah saide vnto them, I and my people were at great strife with the children of Ammon: and when I called you, ye deliuered me not out of their hands.

3 And when I sawe that ye deliuered me not, I put my life in my handes, and passed ouer against the children of Ammon, and the Lord deliuered them into my hand: Wherfore then are ye come vp vnto me this day, to fight against me?

5 And the Gileadites tooke the passages of Iordan before the Ephraimites: and it was so that when those Ephraimites which were escaped saide, Let me go ouer, that the men of Gilead said vnto him, Art thou an Ephraimite? If he said, Nay:

6 Then said they vnto him, Say now, Shibboleth: and he said, Sibboleth: for hee could not frame to pronounce it right. Then they tooke him, and slewe him at the passages of Iordan: and there fell at that time of the Ephraimites, fourtie & two thousand.

7 And Iephthah iudged Israel sixe yeeres: then died Iephthah the Gileadite, and was buried in one of the cities of Gilead.

8 ¶ And after him Ibzan of Bethlehem iudged Israel.

10 Then died Ibzan, and was buried at Bethlehem.

12 And Elon the Zebulonite died, and was buried in Aiialon in the countrey of Zebulun.

13 ¶ And after him, Abdon, the sonne of Hillel a Pirathonite iudged Israel.

14 And he had fourty sonnes, and thirtie nephewes, that rode on threescore and ten asse-colts: and he iudged Israel eight yeeres,

15 And Abdon the sonne of Hillel the Pirathonite died, and was buried in Pirathon in the land of Ephraim, in the mount of the Amalekites.

Ephraimites quarrel with Jephthah. (1-7) Ibzan, Elon, and Abdon judge Israel. (8-15)1-7 The Ephraimites had the same quarrel with Jephthah as with Gideon. Pride was at the bottom of the quarrel; only by that comes contention. It is ill to fasten names of reproach upon persons or countries, as is common, especially upon those under outward disadvantages. It often occasions quarrels that prove of ill consequence, as it did here. No contentions are so bitter as those between brethren or rivals for honour. What need we have to watch and pray against evil tempers! May the Lord incline all his people to follow after things which make for peace!

8-15 We have here a short account of three more of the judges of Israel. The happiest life of individuals, and the happiest state of society, is that which affords the fewest remarkable events. To live in credit and quiet, to be peacefully useful to those around us, to possess a clear conscience; but, above all, and without which nothing can avail, to enjoy communion with God our Saviour while we live, and to die at peace with God and man, form the substance of all that a wise man can desire.

View All Discussusion for Judges Chapter 12... 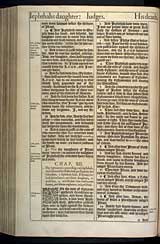