1 Now Iephthah the Gileadite was a mightie man of valour, and he was the sonne of an harlot: and Gilead begate Iephthah.

2 And Gileads wife bare him sonnes, and his wiues sonnes grew vp, and they thrust out Iephthah, and said vnto him, Thou shalt not inherite in our fathers house, for thou art the son of a strange woman.

3 Then Iephthah fled from his brethren, and dwelt in the land of Tob: and there were gathered vaine men to Iephthah, and went out with him.

4 ¶ And it came to passe, in processe of time, that the children of Ammon made warre against Israel.

5 And it was so, that when the children of Ammon made war against Israel, the Elders of Gilead went to fetch Iephthah out of the land of Tob,

6 And they said vnto Iephthah, Come and bee our Captaine, that wee may fight with the children of Ammon.

7 And Iephthah said vnto the Elders of Gilead, Did not ye hate me, and expell me out of my fathers house? And why are ye come vnto mee now when ye are in distresse?

8 And the Elders of Gilead said vnto Iephthah, Therefore we turne againe to thee now, that thou mayest go with vs, and fight against the children of Ammon, and bee our head ouer all the inhabitants of Gilead.

9 And Iephthah said vnto the Elders of Gilead, If ye bring me home againe to fight against the children of Ammon, and the Lord deliuer them before me; shall I be your Head?

10 And the Elders of Gilead said vnto Iephthah, The Lord be witnes betweene vs, if we doe not so according to thy words.

11 Then Iephthah went with the Elders of Gilead, and the people made him head and captaine ouer them: and Iephthah vttered all his words before the Lord in Mizpeh.

12 ¶ And Iephthah sent messengers vnto the king of the children of Ammon, saying, What hast thou to do with me, that thou art come against mee to fight in my land?

13 And the king of the children of Ammon answered vnto the messengers of Iephthah; Because Israel tooke away my land when they came vp out of Egypt, from Arnon euen vnto Iabbok, and vnto Iordan: now therfore restore those lands againe peaceably.

14 And Iephthah sent messengers againe vnto the king of the children of Ammon:

15 And said vnto him, Thus saith Iephthah; Israel tooke not away the land of Moab, nor the land of the children of Ammon:

16 But when Israel came vp from Egypt, and walked through the wildernesse, vnto the red sea, and came to Kadesh;

19 And Israel sent messengers vnto Sihon king of the Amorites, the king of Heshbon, and Israel said vnto him, Let vs passe, we pray thee, thorow thy land, vnto my place.

20 But Sihon trusted not Israel, to passe through his coast: but Sihon gathered all his people together, and pitched in Iahaz, and fought against Israel.

21 And the Lord God of Israel deliuered Sihon and all his people into the hand of Israel, and they smote them: so Israel possessed all the land of the Amorites, the inhabitants of that countrey.

22 And they possessed all the coasts of the Amorites, from Arnon euen vnto Iabbok, and from the wildernesse euen vnto Iordan.

23 So nowe the Lord God of Israel hath dispossessed the Amorites from before his people Israel, and shouldest thou possesse it?

24 Wilt not thou possesse that which Chemosh thy god giueth thee to possesse? so whomsoeuer the Lord our God shal driue out from before vs, them will we possesse.

25 And now, art thou any thing better then Balak the sonne of Zippor king of Moab? Did hee euer striue against Israel, or did hee euer fight against them,

27 Wherefore, I haue not sinned against thee, but thou doest me wrong to warre against mee: the Lord the Iudge, bee Iudge this day betweene the children of Israel, and the children of Ammon.

28 Howbeit, the king of the children of Ammon hearkened not vnto the words of Iephthah which hee sent him.

30 And Iephthah vowed a vowe vnto the Lord, and said, If thou shalt without faile deliuer the children of Ammon into mine hands,

31 Then it shall be, that whatsoeuer commeth forth of the doores of my house to meete me, when I returne in peace from the children of Ammon, shall surely be the Lords, and I will offer it vp for a burnt offering.

32 ¶ So Iephthah passed ouer vnto the children of Ammon to fight against them, and the Lord deliuered them into his hands.

33 And he smote them from Aroer, euen till thou come to Minnith, euen twentie cities, and vnto the plaine of the vineyards, with a very great slaughter: thus the children of Ammon were subdued before the children of Israel.

34 ¶ And Iephthah came to Mizpeh vnto his house, and beholde, his daughter came out to meete him with timbrels and with dances, and she was his onely childe: beside her he had neither sonne nor daughter.

35 And it came to passe when he saw her, that he rent his clothes, and said, Alas, my daughter, thou hast brought me very low, and thou art one of them that trouble me: for I haue opened my mouth vnto the Lord, and I cannot goe backe.

36 And she said vnto him, My father, if thou hast opened thy mouth vnto the Lord, doe to me according to that which hath proceeded out of thy mouth; forasmuch as the Lord hath taken vengeance for thee of thine enemies, euen of the children of Ammon.

37 And she said vnto her father, Let this thing be done for me: Let me alone two moneths, that I may goe vp and downe vpon the mountaines, and bewaile my virginitie, I, and my fellowes.

38 And he said, Goe. And he sent her away for two moneths, and shee went with her companions, and bewailed her virginitie vpon the mountaines.

39 And it came to passe at the ende of two moneths that shee returned vnto her father, who did with her according to his vow which he had vowed: and she knew no man: & it was a custome in Israel,

40 That the daughters of Israel went yeerely to lament the daughter of Iephthah the Gileadite foure dayes in a yeere.

Jephtah and the Gileadites. (1-11) He attempts to make peace. (12-28) Jephthah's vow. He vanquishes the Ammonites. (29-40)1-11 Men ought not to be blamed for their parentage, so long as they by their personal merits roll away any reproach. God had forgiven Israel, therefore Jephthah will forgive. He speaks not with confidence of his success, knowing how justly God might suffer the Ammonites to prevail for the further punishment of Israel. Nor does he speak with any confidence at all in himself. If he succeed, it is the Lord delivers them into his hand; he thereby reminds his countrymen to look up to God as the Giver of victory. The same question as here, in fact, is put to those who desire salvation by Christ. If he save you, will ye be willing that he shall rule you? On no other terms will he save you. If he make you happy, shall he make you holy? If he be your helper, shall he be your Head? Jephthah, to obtain a little worldly honour, was willing to expose his life: shall we be discouraged in our Christian warfare by the difficulties we may meet with, when Christ has promised a crown of life to him that overcometh?

12-28 One instance of the honour and respect we owe to God, as our God, is, rightly to employ what he gives us to possess. Receive it from him, use it for him, and part with it when he calls for it. The whole of this message shows that Jephthah was well acquainted with the books of Moses. His argument was clear, and his demand reasonable. Those who possess the most courageous faith, will be the most disposed for peace, and the readiest to make advances to obtain; but rapacity and ambition often cloak their designs under a plea of equity, and render peaceful endeavours of no avail.

29-40 Several important lessons are to be learned from Jephthah's vow. 1. There may be remainders of distrust and doubting, even in the hearts of true and great believers. 2. Our vows to God should not be as a purchase of the favour we desire, but to express gratitude to him. 3. We need to be very well-advised in making vows, lest we entangle ourselves. 4. What we have solemnly vowed to God, we must perform, if it be possible and lawful, though it be difficult and grievous to us. 5. It well becomes children, obediently and cheerfully to submit to their parents in the Lord. It is hard to say what Jephthah did in performance of his vow; but it is thought that he did not offer his daughter as a burnt-offering. Such a sacrifice would have been an abomination to the Lord; it is supposed she was obliged to remain unmarried, and apart from her family. Concerning this and some other such passages in the sacred history, about which learned men are divided and in doubt, we need not perplex ourselves; what is necessary to our salvation, thanks be to God, is plain enough. If the reader recollects the promise of Christ concerning the teaching of the Holy Spirit, and places himself under this heavenly Teacher, the Holy Ghost will guide to all truth in every passage, so far as it is needful to be understood.

View All Discussusion for Judges Chapter 11... 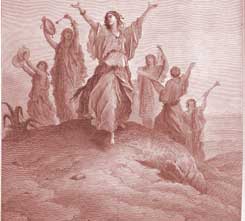 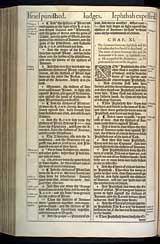