1 Now Iericho was straitly shut vp, because of the children of Israel: none went out, & none came in.

2 And the Lord said vnto Ioshua, See, I haue giuen into thine hand Iericho, and the King thereof, and the mighty men of valour.

3 And ye shall compasse the city, all yee men of warre, and goe round about the city once: thus shalt thou doe sixe dayes.

4 And seuen Priests shall beare before the Arke seuen trumpets of rams hornes: and the seuenth day yee shall compasse the city seuen times, and the Priests shall blow with the trumpets.

5 And it shall come to passe that when they make a long blast with the rammes-horne, and when ye heare the sound of the trumpet, all the people shall shout with a great shout: and the wall of the citie shall fall downe flat, and the people shall ascend vp euery man straight before him.

6 ¶ And Ioshua the sonne of Nun called the Priests, and said vnto them, Take vp the Arke of the Couenant, and let seuen Priests beare seuen trumpets of rammes-hornes, before the Arke of the Lord.

7 And he said vnto the people, Passe on, and compasse the city, and let him that is armed passe on before the Arke of the Lord.

8 ¶ And it came to passe when Ioshua had spoken vnto the people, that the seuen Priestes bearing the seuen trumpets of rammes hornes, passed on before the Lord, and blew with the trumpets: and the Arke of the Couenant of the Lord followed them.

10 And Ioshua had commanded the people, saying, Ye shall not shout, nor make any noise with your voice, neither shall any word proceed out of your mouth, vntill the day I bid you shoute, then shall ye shoute.

11 So the Arke of the Lord compassed the citie, going about it once: and they came into the campe, and lodged in the campe.

12 ¶ And Ioshua rose earely in the morning, and the Priests tooke vp the Arke of the Lord.

14 And the second day they compassed the citie once, and returned into the campe: so they did sixe dayes.

16 And it came to passe at the seuenth time, when the Priests blewe with the trumpets, Ioshua said vnto the people, Shout, for the Lord hath giuen you the citie.

19 But all the siluer, and gold, and vessels of brasse and yron, are consecrated vnto the Lord: they shall come into the treasurie of the Lord.

21 And they vtterly destroyed all that was in the city, both man and woman, yong and old, and oxe, and sheepe, and asse, with the edge of the sword.

22 But Ioshua had said vnto the two men that had spied out the countrey; Goe into the harlots house, and bring out thence the woman and all that she hath, as ye sware vnto her.

23 And the yong men that were spies, went in, and brought out Rahab, and her father, and her mother, and her brethren, and all that she had: and they brought out all her kinred, and left them without the campe of Israel.

24 And they burnt the city with fire, and all that was therein: onely the siluer & the gold, and the vessels of brasse and of yron, they put into the Treasury of the house of the Lord.

25 And Ioshua saued Rahab the harlot aliue, and her fathers houshold, and all that she had: and she dwelleth in Israel euen vnto this day, because she hid the messengers which Ioshua sent to spy out Iericho.

26 ¶ And Ioshua adiured them at that time, saying, Cursed be the man before the Lord, that riseth vp and buildeth this city Iericho: he shall lay the foundation therof in his first borne, and in his yongest sonne shall hee set vp the gates of it.

27 So the Lord was with Ioshua, and his fame was noised throughout all the countrey.

The siege of Jericho. (1-5) The city is compassed. (6-16) Jericho is taken, Rahab and her family are saved. (17-27)1-5 Jericho resolves Israel shall not be its master. It shut itself up, being strongly fortified both by art and nature. Thus were they foolish, and their hearts hardened to their destruction; the miserable case of all that strengthen themselves against the Almighty. God resolves Israel shall be its master, and that quickly. No warlike preparations were to be made. By the uncommon method of besieging the city, the Lord honoured the ark, as the symbol of his presence, and showed that all the victories were from him. The faith and patience of the people were proved and increased.

6-16 Wherever the ark went, the people attended it. God's ministers, by the trumpet of the everlasting gospel, which proclaims liberty and victory, must encourage the followers of Christ in their spiritual warfare. As promised deliverances must be expected in God's way, so they must be expected in his time. At last the people were to shout: they did so, and the walls fell. This was a shout of faith; they believed the walls of Jericho would fall. It was a shout of prayer; they cry to Heaven for help, and help came.

17-27 Jericho was to be a solemn and awful sacrifice to the justice of God, upon those who had filled up the measure of their sins. So He appoints, from whom, as creatures, they received their lives, and to whom, as sinners, they had forfeited them. Rahab perished not with them that believed not, #Heb 11:31|. All her kindred were saved with her; thus faith in Christ brings salvation to the house, #Ac 14:31|. She, and they with her, were plucked as brands from the burning. With Rahab, or with the men of Jericho; our portion must be assigned, as we posses or disregard the sign of salvation; even faith in Christ, which worketh by love. Let us remember what depends upon our choice, and let us choose accordingly. God shows the weight of a Divine curse; where it rests there is no getting from under it; for it brings ruin without remedy.

View All Discussusion for Joshua Chapter 6... 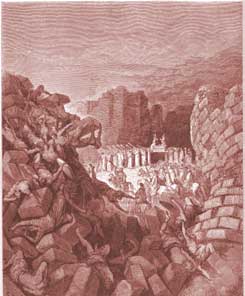 The Walls of Jericho Fall Down 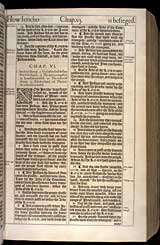