1 And it came to passe when all the people were cleane passed ouer Iordan, that the Lord spake vnto Ioshua, saying,

2 Take you twelue men out of the people, out of euery tribe a man,

3 And command you them, saying, Take you hence out of the mids of Iordan, out of the place where the Priests feet stood firme, twelue stones, and yee shal cary them ouer with you, and leaue them in the lodging place where you shall lodge this night.

4 Then Ioshua called the twelue men, whom he had prepared of the children of Israel, out of euery tribe a man:

5 And Ioshua said vnto them, Passe ouer before the Arke of the Lord your God into the mids of Iordan, and take ye vp euery man of you a stone vpon his shoulder, according vnto the number of the tribes of the children of Israel:

6 That this may be a signe among you, that when your children aske their fathers in time to come, saying, What meane you by these stones?

8 And the children of Israel did so as Ioshua commanded, and tooke vp twelue stones out of the midst of Iordan, as the Lord spake vnto Ioshua, according to the number of the tribes of the children of Israel, and caried them ouer with them, vnto the place where they lodged, and laid them downe there.

9 And Ioshua set vp twelue stones in the midst of Iordan, in the place where the feet of the Priests which bare the Arke of the Couenant, stood: and they are there vnto this day.

10 ¶ For the Priests which bare the Arke, stood in the midst of Iordan, vntill euery thing was finished that the Lord commanded Ioshua to speake vnto the people, according to all that Moses commanded Ioshua: and the people hasted and passed ouer.

11 And it came to passe when all the people were cleane passed ouer, that the Arke of the Lord passed ouer, and the Priests in the presence of the people.

13 About fourty thousand prepared for war, passed ouer before the Lord vnto battell, to the plaines of Iericho.

14 ¶ On that day the Lord magnified Ioshua in the sight of all Israel, and they feared him, as they feared Moses all the dayes of his life.

16 Command the Priests that beare the Arke of the Testimony, that they come vp out of Iordan.

18 And it came to passe when the Priests that bare the Arke of the Couenant of the Lord, were come vp out of the mids of Iordan, and the soles of the Priests feete were lift vp vnto the dry land, that the waters of Iordan returned vnto their place, and flowed ouer all his banks, as they did before.

19 ¶ And the people came vp out of Iordan on the tenth day of the first moneth, and encamped in Gilgal, in the East border of Iericho.

20 And those twelue stones which they tooke out of Iordan, did Ioshua pitch in Gilgal.

21 And he spake vnto the children of Israel, saying, When your children shal aske their fathers in time to come, saying, What meane these stones?

22 Then yee shall let your children know, saying, Israel came ouer this Iordan on dry land.

24 That all the people of the earth might know the hand of the Lord, that it is mighty, that ye might feare the Lord your God for euer.

Stones taken out of Jordan. (1-9) The people pass through Jordan. (10-19) The twelve stones placed in Gilgal. (20-24)1-9 The works of the Lord are so worthy of rememberance, and the heart of man is so prone to forget them, that various methods are needful to refresh our memories, for the glory of God, our advantage, and that of our children. God gave orders for preparing this memorial.

10-19 The priests with the ark did not stir till ordered to move. Let none be weary of waiting, while they have the tokens of God's presence with them, even the ark of the covenant, though it be in the depths of adversity. Notice is taken of the honour put upon Joshua. Those are feared in the best manner, and to the best purpose, who make it appear that God is with them, and that they set him before them.

20-24 It is the duty of parents to tell their children betimes of the words and works of God, that they may be trained up in the way they should go. In all the instruction parents give their children, they should teach them to fear God. Serious godliness is the best learning. Are we not called, as much as the Israelites, to praise the loving-kindness of our God? Shall we not raise a pillar to our God, who has brought us through dangers and distresses in so wonderful a way? For hitherto the Lord hath helped us, as much as he did his saints of old. How great the stupidity and ingratitude of men, who perceive not His hand, and will not acknowledge his goodness, in their frequent deliverances!

View All Discussusion for Joshua Chapter 4... 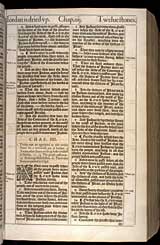