1 And Ioshua rose early in the morning, and they remooued from Shittim, and came to Iordan, hee and all the children of Israel, and lodged there before they passed ouer.

2 And it came to passe after three dayes, that the Officers went thorow the hoste;

3 And they commanded the people, saying, When ye see the Arke of the Couenant of the Lord your God, and the Priests the Leuites bearing it, then yee shall remooue from your place, and goe after it.

4 Yet there shalbe a space betweene you and it, about two thousand cubites by measure: come not neere vnto it, that ye may know the way by which ye must goe: for yee haue not passed this way heretofore.

5 And Ioshua said vnto the people, Sanctifie your selues: for to morrow the Lord wil do wōders among you.

7 ¶ And the Lord saide vnto Ioshua, This day wil I begin to magnifie thee in the sight of all Israel, that they may know that as I was with Moses, so I will be with thee.

8 And thou shalt commaund the Priests that beare the Arke of the Couenant, saying; When ye are come to the brinke of the water of Iordan, yee shall stand still in Iordan.

9 ¶ And Ioshua said vnto the children of Israel, Come hither, and heare the words of the Lord your God.

11 Behold, the Arke of the Couenant, euen the Lord of all the earth, passeth ouer before you, into Iordan.

12 Now therefore take yee twelue men out of the Tribes of Israel, out of euery Tribe a man.

13 And it shall come to passe, assoone as the soles of the feete of the Priestes that beare the Arke of the Lord, the Lord of all the earth, shall rest in the waters of Iordan, that the waters of Iordan shall be cut off, from the waters that come downe from aboue: and they shall stand vpon an heape.

14 ¶ And it came to passe when the people remooued from their tents, to passe ouer Iordan, and the Priests bearing the Arke of the Couenant before the people;

16 That the waters which came downe from aboue, stood and rose vp vpon an heape very farre, from the city Adam, that is beside Zaretan: and those that came downe toward the sea of the plaine, euen the salt sea, failed, and were cut off: and the people passed ouer right against Iericho.

17 And the Priestes that bare the Arke of the Couenant of the Lord, stood firme on drie ground, in the midst of Iordan, and all the Israelites passed ouer on drie ground, vntill all the people were passed cleane ouer Iordan.

The Israelites come to Jordan. (1-6) The Lord encourages joshua-Joshua encourages the people. (7-13) The Israelites pass through Jordan on dry land. (14-17)1-6 The Israelites came to Jordan in faith, having been told that they should pass it. In the way of duty, let us proceed as far as we can, and depend on the Lord. Joshua led them. Particular notice is taken of his early rising, as afterwards upon other occasions, which shows how little he sought his own ease. Those who would bring great things to pass, must rise early. Love not sleep, lest thou come to poverty. All in public stations should always attend to the duty of their place. The people were to follow the ark. Thus must we walk after the rule of the word, and the direction of the Spirit, in everything; so shall peace be upon us as upon the Israel of God; but we must follow our ministers only as they follow Christ. All their way through the wilderness was an untrodden path, but most so this through Jordan. While we are here, we must expect and prepare to pass ways that we have not passed before; but in the path of duty we may proceed with boldness and cheerfulness. Whether we are called to suffer poverty, pain, labour, persecution, reproach, or death, we are following the Author and Finisher of our faith; nor can we set our feet in any dangerous or difficult spot, through our whole journey, but faith will there see the prints of the Redeemer's feet, who trod that very path to glory above, and bids us follow him, that where he is, we may be also. They were to sanctify themselves. Would we experience the effects of God's love and power, we must put away sin, and be careful not to grieve the Holy Spirit of God.

7-13 The waters of Jordan shall be cut off. This must be done in such a way as never was done, but in the dividing of the Red sea. That miracle is here repeated; God has the same power to finish the salvation of his people, as to begin it; the WORD of the Lord was as truly with Joshua as with Moses. God's appearances for his people ought to encourage faith and hope. God's work is perfect, he will keep his people. Jordan's flood cannot keep out Israel, Canaan's force cannot turn them out again.

14-17 Jordan overflowed all its banks. This magnified the power of God, and his kindness to Israel. Although those who oppose the salvation of God's people have all advantages, yet God can and will conquer. This passage over Jordan, as an entrance to Canaan, after their long, weary wanderings in the wilderness, shadowed out the believer's passage through death to heaven, after he has finished his wanderings in this sinful world. Jesus, typified by the ark, hath gone before, and he crossed the river when it most flooded the country around. Let us treasure up experiences of His faithful and tender care, that they may help our faith and hope in the last conflict.

View All Discussusion for Joshua Chapter 3... 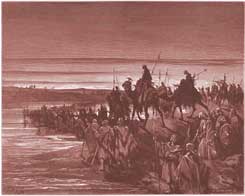 The Israelites Cross the Jordan River 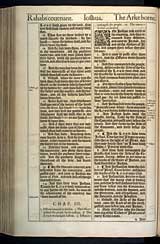