2 And Ioshua said vnto all the people, Thus saith the Lord God of Israel, Your fathers dwelt on the other side of the flood in old time, euen Terah the father of Abraham, and the father of Nachor: and they serued other gods.

3 And I tooke your father Abraham frō the other side of the flood, and led him throughout all the land of Canaan, and multiplied his seed, and gaue him Isaac.

4 And I gaue vnto Isaac, Iacob and Esau: & I gaue vnto Esau mount Seir, to possesse it: but Iacob and his children went downe into Egypt.

5 I sent Moses also and Aaron, and I plagued Egypt, according to that which I did amongst them: and afterward, I brought you out.

6 And I brought your fathers out of Egypt: and you came vnto the sea, and the Egyptians pursued after your fathers with charets and horsemen vnto the red sea.

7 And when they cried vnto the Lord, hee put darkenesse betweene you and the Egyptians, and brought the sea vpon them, and couered them, and your eyes haue seene what I haue done in Egypt, and ye dwelt in the wildernes a long season.

8 And I brought you into the land of the Amorites, which dwelt on the other side Iordan: and they fought with you, and I gaue them into your hand, that ye might possesse their land, and I destroyed them from before you.

9 Then Balak the sonne of Zippor king of Moab, arose and warred against Israel, and sent and called Balaam the sonne of Beor to curse you:

10 But I would not hearken vnto Balaam, therefore he blessed you still: so I deliuered you out of his hand.

11 And ye went ouer Iordan, and came vnto Iericho: and the men of Iericho fought against you, the Amorites, and the Perizzites, & the Canaanites, and the Hittites, and the Girgashites, the Hiuites, and the Iebusites, and I deliuered them into your hand.

12 And I sent the hornet before you, which draue them out from before you, euen the two kings of the Amorites: but not with thy sword, nor with thy bow.

13 And I haue giuen you a land for which ye did not labour, & cities which ye built not, and yee dwell in them: of the vineyards and Oliue-yards which ye planted not, doe ye eate.

14 ¶ Now therefore, feare the Lord, and serue him in sinceritie, and in trueth, and put away the gods which your fathers serued on the other side of the flood, and in Egypt: and serue yee the Lord.

15 And if it seeme euill vnto you to serue the Lord, choose you this day whome you will serue, whether the gods which your fathers serued that were on the other side of the flood, or the gods of the Amorites, in whose lande ye dwell: but as for mee and my house, we will serue the Lord.

16 And the people answered and said, God forbid that wee should forsake the Lord, to serue other gods.

17 For the Lord our God, he it is that brought vs vp and our fathers out of the land of Egypt, from the house of bondage, & which did those great signes in our sight, and preserued vs in all the way wherein we went, and among all the people through whom we passed.

18 And the Lord draue out from before vs all the people, euen the Amorites which dwelt in the land: therefore will we also serue the Lord, for he is our God.

19 And Ioshua said vnto the people, Ye cannot serue the Lord: for hee is an holy God: he is a ielous God, he will not forgiue your transgressions nor your sinnes.

20 If yee forsake the Lord, and serue strange gods, then he will turne, and doe you hurt, and consume you, after that he hath done you good.

21 And the people said vnto Ioshua, Nay, but we will serue the Lord.

22 And Ioshua said vnto the people, Yee are witnesses against your selues, that yee haue chosen you the Lord, to serue him. And they said, We are witnesses.

23 Now therefore put away, said he, the strange gods which are among you, and encline your heart vnto the Lord God of Israel.

24 And the people saide vnto Ioshua; The Lord our God will we serue, and his voice will we obey.

25 So Ioshua made a couenant with the people that day, and set them a Statute, & an Ordinance in Shechem.

26 ¶ And Ioshua wrote these words in the booke of the Law of God, and tooke a great stone, and set it vp there, vnder an oake, that was by the Sanctuary of the Lord.

27 And Ioshua saide vnto all the people, Behold, this stone shalbe a witnesse vnto vs; for it hath heard all the words of the Lord which hee spake vnto vs; it shall be there for a witnesse vnto you, lest ye deny your God.

29 ¶ And it came to passe after these things, that Ioshua the sonne of Nun the seruant of the Lord died, being an hundred and ten yeeres old.

30 And they buried him in the border of his inheritance in Timnath-Serah, which is in mount Ephraim, on the North side of the hill of Gaash.

32 ¶ And the bones of Ioseph, which the children of Israel brought vp out of Egypt, buried they in Shechem, in a parcell of ground which Iacob bought of the sonnes of Hamor the father of Shechem, for an hundred pieces of siluer; and it became the inheritance of the children of Ioseph.

33 And Eleazar the sonne of Aaron died, and they buried him in a hill that pertained to Phinehas his son, which was giuen him in mount Ephraim.

Click here to view
God's benefits to their fathers. (1-14) Joshua renews the covenant between the people and God. (15-28) Joshua's death, Joseph's bones buried, The state of Israel. (29-33)1-14 We must never think our work for God done, till our life is done. If he lengthen out our days beyond what we expected, like those of Joshua, it is because he has some further service for us to do. He who aims at the same mind which was in Christ Jesus, will glory in bearing the last testimony to his Saviour's goodness, and in telling to all around, the obligations with which the unmerited goodness of God has bound him. The assembly came together in a solemn religious manner. Joshua spake to them in God's name, and as from him. His sermon consists of doctrine and application. The doctrinal part is a history of the great things God had done for his people, and for their fathers before them. The application of this history of God's mercies to them, is an exhortation to fear and serve God, in gratitude for his favour, and that it might be continued.

15-28 It is essential that the service of God's people be performed with a willing mind. For LOVE is the only genuine principle whence all acceptable service of God can spring. The Father seeks only such to worship him, as worship him in spirit and in truth. The carnal mind of man is enmity against God, therefore, is not capable of such spiritual worship. Hence the necessity of being born again. But numbers rest in mere forms, as tasks imposed upon them. Joshua puts them to their choice; but not as if it were indifferent whether they served God or not. Choose you whom ye will serve, now the matter is laid plainly before you. He resolves to do this, whatever others did. Those that are bound for heaven, must be willing to swim against the stream. They must not do as the most do, but as the best do. And no one can behave himself as he ought in any station, who does not deeply consider his religious duties in family relations. The Israelites agree with Joshua, being influenced by the example of a man who had been so great a blessing to them; We also will serve the Lord. See how much good great men do, by their influence, if zealous in religion. Joshua brings them to express full purpose of heart to cleave to the Lord. They must come off from all confidence in their own sufficiency, else their purposes would be in vain. The service of God being made their deliberate choice, Joshua binds them to it by a solemn covenant. He set up a monument of it. In this affecting manner Joshua took his last leave of them; if they perished, their blood would be upon their own heads. Though the house of God, the Lord's table, and even the walls and trees before which we have uttered our solemn purposes of serving him, would bear witness against us if we deny him, yet we may trust in him, that he will put his fear into our hearts, that we shall not depart from him. God alone can give grace, yet he blesses our endeavours to engage men to his service.

29-33 Joseph died in Egypt, but gave commandment concerning his bones, that they should not rest in their grave till Israel had rest in the land of promise. Notice also the death and burial of Joshua, and of Eleazar the chief priest. The most useful men, having served their generation, according to the will of God, one after another, fall asleep and see corruption. But Jesus, having spent and ended his life on earth more effectually than either Joshua or Joseph, rose from the dead, and saw no corruption. And the redeemed of the Lord shall inherit the kingdom he prepared for them from the foundation of the world. They will say in admiration of the grace of Jesus, Unto him that loved us, and washed us from our sins in his own blood, and hath made us kings and priests unto God and his Father, to him be glory and dominion for ever and ever. Amen.

View All Comments for Joshua Chapter 24... 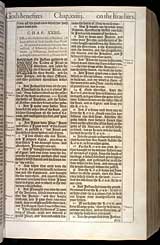