1 And Ioshua the sonne of Nun sent out of Shittim two men, to spie secretly, saying, Go, view the land, euen Iericho: and they went, and came into an harlots house, named Rahab, and lodged there.

2 And it was told the king of Iericho, saying, Behold, there came men in hither to night, of the children of Israel, to search out the countrey.

3 And the king of Iericho sent vnto Rahab, saying, Bring forth the men that are come to thee, which are entred into thine house: for they bee come to search out all the countrey.

4 And the woman tooke the two men, and hid them, & said thus: There came men vnto mee, but I wist not whence they were:

5 And it came to passe about the time of shutting of the gate, when it was darke, that the men went out: whither the men went, I wote not: pursue after them quickely, for ye shall ouertake them.

6 But shee had brought them vp to the roofe of the house, and hid them with the stalkes of flaxe, which she had laid in order vpon the roofe.

8 ¶ And before they were laide downe, shee came vp vnto them vpon the roofe.

9 And she said vnto the men, I know that the Lord hath giuen you the land, and that your terrour is fallen vpon vs, and that all the inhabitants of the land faint because of you:

10 For wee haue heard how the Lord dried vp the water of the red Sea for you; when you came out of Egypt, and what you did vnto the two kings of the Amorites that were on the other side Iordan, Sihon and Og; whom ye vtterly destroyed.

11 And assoone as we had heard these things, our hearts did melt, neither did there remaine any more courage in any man, because of you: for the Lord your God, he is God in heauen aboue, and in earth beneath.

12 Now therfore, I pray you, sweare vnto me by the Lord, since I haue shewed you kindnesse, that ye will also shew kindnesse vnto my fathers house, and giue me a true token:

13 And that ye will saue aliue my father, and my mother, and my brethren, and my sisters, and all that they haue, and deliuer our liues from death.

14 And the men answered her, Our life for yours, if yee vtter not this our businesse. And it shall bee when the Lord hath giuen vs the land, that wee will deale kindely and truely with thee.

15 Then shee let them downe by a coard thorow the window: for her house was vpon the towne wall, and she dwelt vpon the wall.

16 And she said vnto them, Get you to the mountaine, lest the pursuers meete you; and hide your selues there three dayes, vntill the pursuers bee returned, and afterward may ye goe your way.

17 And the men said vnto her, Wee will bee blamelesse of this thine oath which thou hast made vs sweare:

18 Behold, when we come into the land, thou shalt binde this line of scarlet threed in the window which thou didst let vs downe by: and thou shalt bring thy father and thy mother, and thy brethren, and all thy fathers houshold home vnto thee.

20 And if thou vtter this our businesse, then we wilbe quit of thine oath which thou hast made vs to sweare.

21 And shee saide, According vnto your words, so be it. And she sent them away, & they departed: and she bound the scarlet line in the window.

22 And they went, and came vnto the mountaine, and abode there three dayes, vntill the pursuers were returned. And the pursuers sought them thorowout all the way, but found them not.

23 ¶ So the two men returned, and descended from the mountaine, and passed ouer, and came to Ioshua the sonne of Nun, and told him all things that befell them.

24 And they saide vnto Ioshua, Truely the Lord hath deliuered into our hands all the land; for euen all the inhabitants of the countrey doe faint because of vs.

Rahab receives and hides two Israelites. (1-7) Rahab and the spies. (8-21) The return of the spies. (22-24)1-7 Faith in God's promises ought not to do away, but to encourage our diligence in the use of proper means. The providence of God directed the spies to the house of Rahab. God knew where there was one that would be true to them, though they did not. Rahab appears to have been an innkeeper; and if she had formerly been one of bad life, which is doubtful, she had left her evil courses. That which seems to us most accidental, is often overruled by the Divine providence to serve great ends. It was by faith that Rahab received those with peace, against whom her king and country had war. We are sure this was a good work; it is so spoken of by the apostle, #Jas 2:25|; and she did it by faith, such a faith as set her above the fear of man. Those only are true believers, who find in their hearts to venture for God; they take his people for their people, and cast in their lot among them. The spies were led by the special providence of God, and Rahab entertained them out of regard to Israel and Israel's God, and not for lucre or for any evil purpose. Though excuses may be offered for the guilt of Rahab's falsehood, it seems best to admit nothing which tends to explain it away. Her views of the Divine law must have been very dim: a falsehood like this, told by those who enjoy the light of revelation, whatever the motive, would deserve heavy censure.

8-21 Rahab had heard of the miracles the Lord wrought for Israel. She believed that his promises would certainly be fulfilled, and his threatenings take effect; and that there was no way of escape but by submitting to him, and joining with his people. The conduct of Rahab proved that she had the real principle of Divine faith. Observe the promises the spies made to her. The goodness of God is often expressed by his kindness and truth, #Ps 117:2|; in both these we must be followers of him. Those who will be conscientious in keeping promises, are cautious in making them. The spies make needful conditions. The scarlet cord, like the blood upon the doorpost at the passover, recalls to remembrance the sinner's security under the atoning blood of Christ; and that we are to flee thereto for refuge from the wrath of a justly offended God. The same cord Rahab used for the saving of these Israelites, was to be used for her own safety. What we serve and honour God with, we may expect he will bless, and make useful to us.

22-24 The report the spies brought was encouraging. All the people of the country faint because of Israel; they have neither wisdom to yield, nor courage to fight. Those terrors of conscience, and that sense of Divine wrath, which dismay the ungodly, but bring not to repentance, are fearful forebodings of approaching destruction. But grace yet abounds to the chief of sinners. Let them, without delay, flee to Christ, and all shall be well.

View All Discussusion for Joshua Chapter 2... 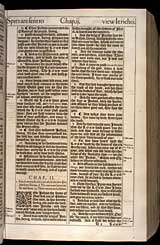