2 This is the land that yet remaineth: all the borders of the Philistines, and all Geshuri,

3 From Sihor, which is before Egypt, euen vnto the borders of Ekron Northward, which is counted to the Canaanite: fiue lords of the Philistines; the Gazathites, and the Ashdothites, the Eshkalonites, the Gittites, and the Ekronites; Also the Auites.

4 From the South, all the land of the Canaanites, and Mearah that is beside the Sidonians, vnto Aphek, to the borders of the Amorites:

5 And the land of the Giblites, and al Lebanon toward the Sunne rising, from Baal-Gad vnder mount Hermon, vnto the entring into Hamath.

6 All the inhabitants of the hill countrey, from Lebanon vnto Misrephothmaim, and all the Sidonians, them will I driue out from before the children of Israel: onely diuide thou it by lot vnto the Israelites, for an inheritance, as I haue commanded thee.

7 Now therefore, diuide this land for an inheritance vnto the nine tribes, and the halfe tribe of Manasseh,

8 With whom the Reubenites, and the Gadites haue receiued their inheritance, which Moses gaue them, beyond Iordan Eastward, euen as Moses the seruant of the Lord gaue them:

9 From Aroer that is vpon the banke of the riuer Arnon, and the citie that is in the middest of the riuer, and all the plaine of Medeba vnto Dibon:

10 And all the cities of Sihon king of the Amorites, which reigned in Heshbon, vnto the border of the children of Ammon:

11 And Gilead, and the border of the Geshurites, and Maachathites, and all mount Hermon, and all Bashan vnto Salcah:

12 All the kingdome of Og in Bashan, which reigned in Ashtaroth and in Edrei, who remained of the remnant of the giants: for these did Moses smite, and cast them out.

14 Onely vnto the tribe of Leui hee gaue none inheritance: the sacrifices of the Lord God of Israel made by fire, are their inheritance, as he said vnto them.

15 ¶ And Moses gaue vnto the tribe of the children of Reuben inheritance according to their families:

16 And their coast was from Aroer that is on the banke of the riuer Arnon, and the city that is in the midst of the riuer, and all the plaine by Medeba.

17 Heshbon and all her cities that are in the plaine: Dibon, and Bamoth-Baal, and Beth-Baalmeon,

18 And Iahazah, and Kedemoth, and Mephaath,

19 And Kiriathaim, and Sibmah, and Zareth-shahar, in the mount of the valley,

21 And all the cities of the plaine, and all the kingdome of Sihon king of the Amorites, which reigned in Heshbon, whom Moses smote with the princes of Midian, Eui, and Rekem, and Zur, and Hur, and Reba, which were dukes of Sihon, dwelling in the countrey.

22 ¶ Balaam also the sonne of Beor the Sooth-sayer did the children of Israel slay with the sword, among them that were slaine by them.

24 And Moses gaue inheritance vnto the tribe of Gad, euen vnto the children of Gad, according to their families:

25 And their coast was Iazer, and all the cities of Gilead, and halfe the land of the children of Ammon, vnto Aroer that is before Rabbah:

26 And from Heshbon vnto Ramath-Mizpeh, and Betonim: and from Mahanaim vnto the border of Debir.

27 And in the valley, Beth-aram, and Beth-nimrah, and Succoth, and Zaphon the rest of the kingdome of Sihon king of Heshbon, Iordan, and his border, euen vnto the edge of the sea of Cinneroth, on the other side Iordan Eastward.

28 This is the inheritance of the children of Gad after their families: the cities and their villages.

30 And their coast was frō Mahanaim all Bashan, all the kingdome of Og king of Bashan, and all the townes of Iair, which are in Bashan, threescore cities:

32 These are the countreyes which Moses did distribute for inheritance in the plaines of Moab, on the other side Iordan by Iericho Eastward.

33 But vnto the tribe of Leui Moses gaue not any inheritance: the Lord God of Israel was their inheritance, as he said vnto them.

Bounds of the land not yet conquered. (1-6) Inheritance of Reuben. (7-33)1-6 At this chapter begins the account of the dividing of the land of Canaan among the tribes of Israel by lot; a narrative showing the performance of the promise made to the fathers, that this land should be given to the seed of Jacob. We are not to pass over these chapters of hard names as useless. Where God has a mouth to speak, and a hand to write, we should find an ear to hear, and an eye to read; and may God give us a heart to profit! Joshua is supposed to have been about one hundred years old at this time. It is good for those who are old and stricken in years to be put in remembrance of their being so. God considers the frame of his people, and would not have them burdened with work above their strength. And all people, especially old people, should set to do that quickly which must be done before they die, lest death prevent them, #Ec 9:10|. God promise that he would make the Israelites masters of all the countries yet unsubdued, through Joshua was old, and not able to do it; old, and not likely to live to see it done. Whatever becomes of us, and however we may be laid aside as despised, broken vessels, God will do his own work in his own time. We must work out our salvation, then God will work in us, and work with us; we must resist our spiritual enemies, then God will tread them under our feet; we must go forth to our Christian work and warfare, then God will go forth before us.

7-33 The land must be divided among the tribes. It is the will of God that every man should know his own, and not take that which is another's. The world must be governed, not by force, but right. Wherever our habitation is placed, and in whatever honest way our portion is assigned, we should consider them as allotted of God; we should be thankful for, and use them as such, while every prudent method should be used to prevent disputes about property, both at present and in future. Joshua must be herein a type of Christ, who has not only conquered the gates of hell for us, but has opened to us the gates of heaven, and having purchased the eternal inheritance for all believers, will put them in possession of it. Here is a general description of the country given to the two tribes and a half, by Moses. Israel must know their own, and keep to it; and may not, under pretence of their being God's peculiar people, encroach on their neighbours. Twice in this chapter it is noticed, that to the tribe of Levi Moses gave no inheritance: see #Nu 18:20|. Their maintenance must be brought out of all the tribes. The ministers of the Lord should show themselves indifferent about worldly interests, and the people should take care they want nothing suitable. And happy are those who have the Lord God of Israel for their inheritance, though little of this world falls to their lot. His providences will supply their wants, his consolations will support their souls, till they gain heavenly joy and everlasting pleasures.

View All Discussusion for Joshua Chapter 13... 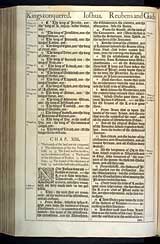