1 Now these are the kings of the land, which the children of Israel smote, and possessed their land on the other side Iordan, toward the rising of the Sunne: from the riuer Arnon, vnto mount Hermon, and all the plaine on the East.

2 Sihon king of the Amorites who dwelt in Heshbon, and ruled from Aroer, which is vpon the banke of the riuer of Arnon, and from the middle of the riuer, and from halfe Gilead vnto the riuer Iabbok; which is the border of the children of Ammon:

4 ¶ And the coast of Og king of Bashan, which was of the remnant of the Giants, that dwelt at Ashtaroth, and at Edrei,

5 And reigned in mount Hermon, and in Salcah, and in all Bashan, vnto the border of the Geshurites, and the Maachathites, and halfe Gilead, the border of Sihon king of Heshbon.

7 ¶ And these are the kings of the countrey which Ioshua and the children of Israel smote on this side Iordan on the West, from Baal Gad in the valley of Lebanon, euen vnto the mount Halak, that goeth vp to Seir, which Ioshua gaue vnto the tribes of Israel for a possession, according to their diuisions:

9 ¶ The king of Iericho, one: the king of Ai, which is beside Bethel, one:

10 The king of Ierusalem, one: the king of Hebron, one:

16 The king of Makkedah, one: the king of Bethel, one:

20 The king of Shimron-Meron, one: the king of Achshaph, one:

21 The king of Taanach, one: the king of Megiddo, one:

22 The king of Kedesh, one: the king of Iokneam of Carmel, one:

23 The king of Dor, in the coast of Dor, one: the king of the nations of Gilgal, one:

24 The king of Tirzah, one: all the kings thirtie and one.

The two kings conquered by Moses. (1-6) The kings whom Joshua smote. (7-24)1-6 Fresh mercies must not drown the remembrance of former mercies, nor must the glory of the present instruments of good to the church diminish the just honour of those who went before them, since God is the same who wrought by both. Moses gave to one part of Israel a very rich and fruitful country, but it was on the outside of Jordan. Joshua gave to all Israel the holy land, within Jordan. So the law has given to some few of God's spiritual Israel worldly blessings, earnests of good things to come; but our Lord Jesus, the true Joshua, provided for all the children of promise spiritual blessings, and the heavenly Canaan.

7-24 We have here the limits of the country Joshua conquered. A list is given of the kings subdued by Israel: thirty-one in all. This shows how fruitful Canaan then was, in which so many chose to throng together. This was the land God appointed for Israel; yet in our day it is one of the most barren and unprofitable countries in the world. Such is the effect of the curse it lies under, since its possessors rejected Christ and his gospel, as was foretold by Moses, #De 29:23|. The vengeance of a righteous God, inflicted on all these kings and their subjects, for their wickedness, should make us dread and hate sin. The fruitful land bestowed on his chosen people, should fill our hearts with hope and confidence in his mercy, and with humble gratitude.

View All Discussusion for Joshua Chapter 12... 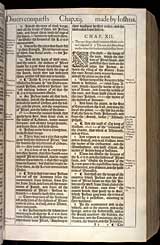