1 And it came to passe, when Iabin king of Hazor had heard those things, that hee sent to Iobab king of Madon, and to the king of Shimron, & to the king of Achshaph,

2 And to the kings that were on the North of the mountaines, and of the plaines South of Cinneroth, and in the valley, and in the borders of Dor, on the West;

4 And they went out, they and all their hostes with them, much people, euen as the sand that is vpon the Seashore in multitude, with horses and charets very many.

5 And when all these Kings were met together, they came and pitched together at the waters of Merom, to fight against Israel.

6 ¶ And the Lord saide vnto Ioshua, Be not afraid because of them: for to morrow about this time will I deliuer them vp al slaine before Israel: thou shalt hough their horses, and burne their charets with fire.

7 So Ioshua came, and all the people of warre with him, against them by the waters of Merom suddenly, and they fell vpon them.

8 And the Lord deliuered them into the hand of Israel, who smote them, and chased them vnto great Zidon, and vnto Misrephothmaim, and vnto the valley of Mizpeh Eastward, and they smote them, vntill they left them none remayning.

9 And Ioshua did vnto them as the Lord bade him: hee houghed their horses, and burnt their charets with fire.

10 ¶ And Ioshua at that time turned backe, and tooke Hazor, and smote the king thereof with the sword: for Hazor beforetime was the head of all those kingdomes.

11 And they smote all the soules that were therein with the edge of the sword, vtterly destroying them: there was not any left to breathe; and he burnt Hazor with fire.

12 And all the cities of those kings, and all the kings of them, did Ioshua take, and smote them with the edge of the sword, and he vtterly destroied them, as Moses the seruant of the Lord commanded.

13 But as for the cities that stood still in their strength, Israel burned none of them, saue Hazor onely; that did Ioshua burne.

14 And all the spoile of these cities, and the cattell, the children of Israel tooke for a pray vnto themselues: but euery man they smote with the edge of the sword, vntill they had destroyed them, neither left they any to breathe.

17 Euen from the mount Halak, that goeth vp to Seir, vnto Baal-Gad, in the valley of Lebanon, vnder mount Hermon: and all their kings he tooke, and smote them, and slew them.

18 Ioshua made warre a long time, with all those kings.

19 There was not a citie that made peace with the children of Israel, saue the Hiuites the inhabitants of Gibeon; all other they tooke in battell.

22 There was none of the Anakims left in the land of the children of Israel: onely in Gaza, in Gath, and in Ashdod, there remained.

23 So Ioshua tooke the whole land according to all that the Lord saide vnto Moses, and Ioshua gaue it for an inheritance vnto Israel, according to their diuisions by their tribes: and the land rested from warre.

Divers kings overcome at the waters of Merom. (1-9) Hazor is taken and burned. (10-14) All that country subdued, The Anakims cut off. (15-23)1-9 The wonders God wrought for the Israelites were to encourage them to act vigorously themselves. Thus the war against Satan's kingdom, carried on by preaching the gospel, was at first forwarded by miracles; but being fully proved to be of God, we are now left to the Divine grace in the usual course, in the use of the sword of the Spirit. God encouraged Joshua. Fresh dangers and difficulties make it necessary to seek fresh supports from the word of God, which we have nigh unto us for use in every time of need. God proportions our trials to our strength, and our strength to our trials. Joshua's obedience in destroying the horses and chariots, shows his self-denial in compliance with God's command. The possession of things on which the carnal heart is prone to depend, is hurtful to the life of faith, and the walk with God; therefore it is better to be without worldly advantages, than to have the soul endangered by them.

10-14 The Canaanites filled up the measure of their iniquity, and were, as a judgment, left to the pride, obstinacy, and enmity of their hearts, and to the power of Satan; all restraints being withdrawn, while the dispensations of Providence tended to drive them to despair. They brought on themselves the vengeance they justly merited, of which the Israelites were to be executioners, by the command the Lord gave to Moses.

15-23 Never let the sons of Anak be a terror to the Israel of God, for their day to fall will come. The land rested from war. It ended not in a peace with the Canaanites, that was forbidden, but in a peace from them. There is a rest, a rest from war, remaining for the people of God, into which they shall enter, when their warfare is accomplished. That which was now done, is compared with what had been said to Moses. God's word and his works, if viewed together, will be found mutually to set each other forth. If we make conscience of our duty, we need not question the performance of the promise. But the believer must never put off his armour, or expect lasting peace, till he closes his eyes in death; nay, as his strength and usefulness increase, he may expect more heavy trials; yet the Lord will not permit any enemies to assault the believer till he has prepared him for the battle. Christ Jesus ever lives to plead for his people, and their faith shall not fail, however Satan may be permitted to assault them. And however tedious, sharp, and difficult the believer's warfare, his patience in tribulation may be encouraged by the joyfulness of hope; for he will, ere long, rest from sin and from sorrow in the Canaan above.

View All Discussusion for Joshua Chapter 11... 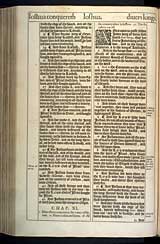