1 Now it came to passe when Adoni-zedek King of Ierusalem, had heard how Ioshua had taken Ai, and had vtterly destroyed it, ( as he had done to Iericho, and her King, so hee had done to Ai, and her King) and how the inhabitants of Gibeon had made peace with Israel, and were among them,

2 That they feared greatly because Gibeon was a great citie, as one of the royall cities, and because it was greater then Ai, and all the men thereof were mighty.

4 Come vp vnto me, and helpe me, that we may smite Gibeon: for it hath made peace with Ioshua, and with the children of Israel.

6 ¶ And the men of Gibeon sent vnto Ioshua to the campe to Gilgal, saying, Slacke not thy hand from thy seruants, come vp to vs quickly, and saue vs, and helpe vs: for all the kings of the Amorites that dwell in the mountaines, are gathered together against vs.

7 So Ioshua ascended from Gilgal, he, and all the people of warre with him, and all the mighty men of valour.

8 ¶ And the Lord said vnto Ioshua, Feare them not: for I haue deliuered them into thine hand; there shall not a man of them stand before thee.

9 Ioshua therefore came vnto them suddenly, and went vp from Gilgal all night.

10 And the Lord discomfited them before Israel, and slewe them with a great slaughter at Gibeon, and chased them along the way that goeth vp to Bethoron, and smote them to Azekah and vnto Makkedah.

11 And it came to passe as they fled from before Israel, and were in the going downe to Bethoron, that the Lord cast downe great stones from heauen vpon them, vnto Azekah, and they died: they were moe which died with hailestones, then they whome the children of Israel slew with the sword.

12 ¶ Then spake Ioshua to the Lord in the day when the Lord deliuered vp the Amorites before the children of Israel, and hee said in the sight of Israel, Sunne, stand thou still vpon Gibeon, and thou Moone in the valley of Aialon.

14 And there was no day like that, before it, or after it, that the Lord hearkened vnto the voyce of a man: for the Lord fought for Israel.

15 ¶ And Ioshua returned, and all Israel with him, vnto the campe to Gilgal.

16 But these fiue kings fled, and hid themselues in a caue at Makkedah.

17 And it was told Ioshua, saying, The fiue kings are found hid in a caue at Makkedah.

18 And Ioshua said, Roule great stones vpon the mouth of the caue, and set men by it, for to keepe them.

19 And stay you not, but pursue after your enemies, and smite the hindmost of them, suffer them not to enter into their cities: for the Lord your God hath deliuered them into your hand.

20 And it came to passe when Ioshua and the children of Israel had made an end of slaying them with a very great slaughter, till they were consumed, that the rest which remained of them, entred into fenced cities.

21 And all the people returned to the campe to Ioshua at Makkedah in peace: none mooued his tongue against any of the children of Israel.

22 Then said Ioshua, Open the mouth of the caue, and bring out those fiue kings vnto me out of the caue.

24 And it came to passe when they brought out those kings vnto Ioshua, that Ioshua called for all the men of Israel, and saide vnto the captaines of the men of war which went with him, Come neere, put your feete vpon the neckes of these kings. And they came neere, and put their feet vpon the necks of them.

25 And Ioshua said vnto them, Feare not, nor be dismaid, bee strong, and of good courage: for thus shall the Lord doe to all your enemies against whom ye fight.

26 And afterward Ioshua smote them, and slew them, and hanged them on fiue trees: and they were hanging vpon the trees vntill the euening.

27 And it came to passe at the time of the going downe of the Sunne, that Ioshua commanded, and they tooke them downe off the trees, and cast them into the caue, wherein they had beene hid, and laid great stones in the caues mouth, which remain vntil this very day.

28 ¶ And that day Ioshua tooke Makkedah, and smote it with the edge of the sword, and the king thereof hee vtterly destroyed, them, and all the soules that were therein, he let none remaine: and he did to the king of Makkedah, as hee did vnto the king of Iericho.

29 Then Ioshua passed from Makkedah, and all Israel with him, vnto Libnah, and fought against Libnah.

31 ¶ And Ioshua passed from Libnah and all Israel with him, vnto Lachish, and encamped against it, and fought against it.

32 And the Lord deliuered Lachish into the hande of Israel, which tooke it on the second day, and smote it with the edge of the sword, and all the soules that were therein, according to all that he had done to Libnah.

33 ¶ Then Horam king of Gezer, came vp to helpe Lachish, and Ioshua smote him and his people, vntill he had left him none remayning.

34 ¶ And from Lachish, Ioshua passed vnto Eglon, and all Israel with him, and they encamped against it, and fought against it.

35 And they tooke it on that day, and smote it with the edge of the sword, and all the soules that were therein he vtterly destroyed that day, according to all that he had done to Lachish.

36 And Ioshua went vp from Eglon, and all Israel with him, vnto Hebron, and they fought against it.

38 ¶ And Ioshua returned, and all Israel with him to Debir, and fought against it.

40 ¶ So Ioshua smote all the countrey of the hils, and of the South, and of the vale, and of the springs, and all their kings, hee left none remayning, but vtterly destroyed all that breathed, as the Lord God of Israel commanded.

41 And Ioshua smote them from Kadesh-Barnea, euen vnto Gaza, and all the countrey of Goshen, euen vnto Gibeon.

42 And all these Kings and their land did Ioshua take at one time: because the Lord God of Israel fought for Israel.

43 And Ioshua returned & al Israel with him, vnto the campe to Gilgal.

Five kings war against Gibeon. (1-6) Joshua succours Gibeon The sun and moon stand still. (7-14) The kings are taken, their armies defeated, and they are put to death. (15-27) Seven other kings defeated and slain. (28-43)1-6 When sinners leave the service of Satan and the friendship of the world, that they make peace with God and join Israel, they must not marvel if the world hate them, if their former friends become foes. By such methods Satan discourages many who are convinced of their danger, and almost persuaded to be Christians, but fear the cross. These things should quicken us to apply to God for protection, help, and deliverance.

7-14 The meanest and most feeble, who have just begun to trust the Lord, are as much entitled to be protected as those who have long and faithfully been his servants. It is our duty to defend the afflicted, who, like the Gibeonites, are brought into trouble on our account, or for the sake of the gospel. Joshua would not forsake his new vassals. How much less shall our true Joshua fail those who trust in Him! We may be wanting in our trust, but our trust never can want success. Yet God's promises are not to slacken and do away, but to quicken and encourage our endeavours. Notice the great faith of Joshua, and the power of God answering it by the miraculous staying of the sun, that the day of Israel's victories might be made longer. Joshua acted on this occasion by impulse on his mind from the Spirit of God. It was not necessary that Joshua should speak, or the miracle be recorded, according to the modern terms of astronomy. The sun appeared to the Israelites over Gibeon, and the moon over the valley of Ajalon, and there they appeared to be stopped on their course for one whole day. Is any thing too hard for the Lord? forms a sufficient answer to ten thousand difficulties, which objectors have in every age started against the truth of God as revealed in his written word. Proclamation was hereby made to the neighbouring nations, Behold the works of the Lord, and say, What nation is there so great as Israel, who has God so nigh unto them?

15-27 None moved his tongue against any of the children of Israel. This shows their perfect safety. The kings were called to an account, as rebels against the Israel of God. Refuges of lies will but secure for God's judgment. God punished the abominable wickedness of these kings, the measure of whose iniquity was now full. And by this public act of justice, done upon these ringleaders of the Canaanites in sin, he would possess his people with the greater dread and detestation of the sins of the nations that God cast out from before them. Here is a type and figure of Christ's victories over the powers of darkness, and of believers' victories through him. In our spiritual conflicts we must not be satisfied with obtaining some important victory. We must pursue our scattered enemies, searching out the remains of sin as they rise up in our hearts, and thus pursue the conquest. In so doing, the Lord will afford light until the warfare be accomplished.

28-43 Joshua made speed in taking these cities. See what a great deal of work may be done in a little time, if we will be diligent, and improve our opportunities. God here showed his hatred of the idolatries and other abominations of which the Canaanites had been guilty, and shows us how great the provocation was, by the greatness of the destruction brought upon them. Here also was typified the destruction of all the enemies of the Lord Jesus, who, having slighted the riches of his grace, must for ever feel the weight of his wrath. The Lord fought for Israel. They could not have gotten the victory, if God had not undertaken the battle. We conquer when God fights for us; if he be for us, who can be against us?

View All Discussusion for Joshua Chapter 10... 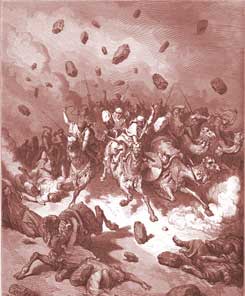 The Army of the Amorites Is Destroyed 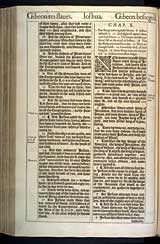