1 And the word of þe Lordcame vnto Ionah the second time, saying;

2 Arise, goe vnto Nineueh that great citie, and preach vnto it the preaching that I bid thee.

3 So Ionah arose and went vnto Nineueh, according to the word of the Lord: now Nineueh was an exceeding great citie of three dayes iourney.

4 And Ionah began to enter into the citie a dayes iourney, and hee cryed, and said; Yet fourtie dayes, and Niniueh shalbe ouerthrowen.

5 ¶ So the people of Nineueh beleeued God, and proclaimed a fast, and put on sackecloth from the greatest of them euen to the least of them.

6 For word came vnto the King of Nineueh, and he arose from his throne, and he laid his robe from him and couered him with sackcloth, & sate in ashes.

7 And he caused it to be proclaimed and published through Nineueh (by the decree of the King and his nobles) saying; Let neither man nor beast, herd nor flocke taste any thing; let them not feede, nor drinke water.

8 But let man and beast be couered with sackecloth, and cry mightily vnto God: yea, let them turne euery one from his euill way, and from the violence that is in their hands.

9 Who can tell if God will turne and repent, and turne away from his fierce anger, that we perish not?

10 ¶ And God saw their workes, that they turned from their euill way, and God repented of the euill that hee had sayd, that he would doe vnto them, and he did it not.

Jonah sent again to Nineveh, preaches there. (1-4) Nineveh is spared upon the repentance of the inhabitants. (5-10)1-4 God employs Jonah again in his service. His making use of us is an evidence of his being at peace with us. Jonah was not disobedient, as he had been. He neither endeavoured to avoid hearing the command, nor declined to obey it. See here the nature of repentance; it is the change of our mind and way, and a return to our work and duty. Also, the benefit of affliction; it brings those back to their place who had deserted it. See the power of Divine grace, for affliction of itself would rather drive men from God, than draw them to him. God's servants must go where he sends them, come when he calls them, and do what he bids them; we must do whatever the word of the Lord commands. Jonah faithfully and boldly delivered his errand. Whether Jonah said more, to show the anger of God against them, or whether he only repeated these words again and again, is not certain, but this was the purport of his message. Forty days is a long time for a righteous God to delay judgments, yet it is but a little time for an unrighteous people to repent and reform in. And should it not awaken us to get ready for death, to consider that we cannot be so sure that we shall live forty days, as Nineveh then was that it should stand forty days? We should be alarmed if we were sure not to live a month, yet we are careless though we are not sure to live a day.

5-10 There was a wonder of Divine grace in the repentance and reformation of Nineveh. It condemns the men of the gospel generation, #Mt 12:41|. A very small degree of light may convince men that humbling themselves before God, confessing their sins with prayer, and turning from sin, are means of escaping wrath and obtaining mercy. The people followed the example of the king. It became a national act, and it was necessary it should be so, when it was to prevent a national ruin. Let even the brute creatures' cries and moans for want of food remind their owners to cry to God. In prayer we must cry mightily, with fixedness of thought, firmness of faith, and devout affections. It concerns us in prayer to stir up all that is within us. It is not enough to fast for sin, but we must fast from sin; and, in order to the success of our prayers, we must no more regard iniquity in our hearts, #Ps 66:18|. The work of a fast-day is not done with the day. The Ninevites hoped that God would turn from his fierce anger; and that thus their ruin would be prevented. They could not be so confident of finding mercy upon their repentance, as we may be, who have the death and merits of Christ, to which we may trust for pardon upon repentance. They dared not presume, but they did not despair. Hope of mercy is the great encouragement to repentance and reformation. Let us boldly cast ourselves down at the footstool of free grace, and God will look upon us with compassion. God sees who turn from their evil ways, and who do not. Thus he spared Nineveh. We read of no sacrifices offered to God to make atonement for sin; but a broken and a contrite heart, such as the Ninevites then had, he will not despise.

View All Discussusion for Jonah Chapter 3... 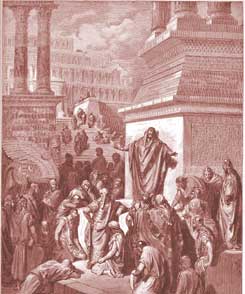 Jonah Preaches to the Ninevites 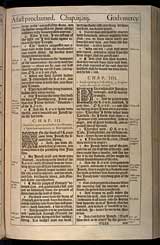