1 Now the word of the Lord came vnto Ionah the sonne of Amittai, saying,

2 Arise, goe to Nineueh that great citie, and cry against it: for their wickednes is come vp before me.

4 ¶ But the Lord sent out a great winde into the sea, and there was a mightie tempest in the sea, so that the ship was like to be broken.

5 Then the Mariners were afraid, and cried euery man vnto his god, and cast foorth the wares that were in the ship, into the sea, to lighten it of them: but Ionah was gone downe into the sides of the ship, and hee lay, and was fast asleepe.

6 So the shipmaster came to him, and said vnto him; What meanest thou, O sleeper? Arise, call vpon thy God, if so be that God wil thinke vpon vs, that we perish not.

7 And they said euery one to his fellow; Come, and let vs cast lots, that we may know for whose cause this euil is vpon vs. So they cast lots, and the lot fell vpon Ionah.

8 Then said they vnto him, Tel vs, we pray thee, for whose cause this euill is vpon vs: What is thine occupation? and whence commest thou? What is thy countrey? and of what people art thou?

9 And hee said vnto them, I am an Hebrew, and I feare the Lord the God of heauen, which hath made the sea, and the dry land.

10 Then were the men exceedingly afraid, and saide vnto him; Why hast thou done this? (for the men knew that he fled from the presence of the Lord, because he had told them.)

11 ¶ Then said they vnto him, What shall we doe vnto thee, that the sea may be calme vnto vs? (for the sea wrought and was tempestuous.)

12 And he said vnto them, Take me vp, and cast mee foorth into the sea; so shall the sea be calme vnto you: for I know that for my sake this great tempest is vpon you.

13 Neuerthelesse the men rowed hard to bring it to the land, but they could not: for the sea wrought, and was tempestuous against them.

15 So they tooke vp Ionah, and cast him foorth into the sea, and the sea ceased from her raging.

16 Then the men feared the Lord exceedingly, and offered a sacrifice vnto the Lord, and made vowes.

17 ¶ Now the Lord had prepared a great fish to swallow vp Ionah, and Ionah was in the belly of the fish three dayes, and three nights.

Jonah was a native of Galilee, #2Ki 14:25|. His miraculous deliverance from out of the fish, rendered him a type of our blessed Lord, who mentions it, so as to show the certain truth of the narrative. All that was done was easy to the almighty power of the Author and Sustainer of life. This book shows us, by the example of the Ninevites, how great are the Divine forbearance and long-suffering towards sinners. It shows a most striking contrast between the goodness and mercy of God, and the rebellion, impatience, and peevishness of his servant; and it will be best understood by those who are most acquainted with their own hearts.Jonah, sent to Nineveh, flees to Tarshish. (1-3) He is stayed by a tempest. (4-7) His discourse with the mariners. (8-12) He is cast into the sea, and miraculously preserved. (13-17)1-3. It is sad to think how much sin is committed in great cities. Their wickedness, as that of Nineveh, is a bold and open affront to God. Jonah must go at once to Nineveh, and there, on the spot, cry against the wickedness of it. Jonah would not go. Probably there are few among us who would not have tried to decline such a mission. Providence seemed to give him an opportunity to escape; we may be out of the way of duty, and yet may meet with a favourable gale. The ready way is not always the right way. See what the best of men are, when God leaves them to themselves; and what need we have, when the word of the Lord comes to us, to have the Spirit of the Lord to bring every thought within us into obedience.

4-7 God sent a pursuer after Jonah, even a mighty tempest. Sin brings storms and tempests into the soul, into the family, into churches and nations; it is a disquieting, disturbing thing. Having called upon their gods for help, the sailors did what they could to help themselves. Oh that men would be thus wise for their souls, and would be willing to part with that wealth, pleasure, and honour, which they cannot keep without making shipwreck of faith and a good conscience, and ruining their souls for ever! Jonah was fast asleep. Sin is stupifying, and we are to take heed lest at any time our hearts are hardened by the deceitfulness of it. What do men mean by sleeping on in sin, when the word of God and the convictions of their own consciences, warn them to arise and call on the Lord, if they would escape everlasting misery? Should not we warn each other to awake, to arise, to call upon our God, if so be he will deliver us? The sailors concluded the storm was a messenger of Divine justice sent to some one in that ship. Whatever evil is upon us at any time, there is a cause for it; and each must pray, Lord, show me wherefore thou contendest with me. The lot fell upon Jonah. God has many ways of bringing to light hidden sins and sinners, and making manifest that folly which was thought to be hid from the eyes of all living.

8-12 Jonah gave an account of his religion, for that was his business. We may hope that he told with sorrow and shame, justifying God, condemning himself, and explaining to the mariners what a great God Jehovah is. They said to him, Why hast thou done this? If thou fearest the God that made the sea and the dry land, why wast thou such a fool as to think thou couldst flee from his presence? If the professors of religion do wrong, they will hear it from those who make no such profession. When sin has raised a storm, and laid us under the tokens of God's displeasure, we must consider what is to be done to the sin that raised the storm. Jonah uses the language of true penitents, who desire that none but themselves may fare the worse for their sins and follies. Jonah sees this to be the punishment of his iniquity, he accepts it, and justifies God in it. When conscience is awakened, and a storm raised, nothing will turn it into a calm but parting with the sin that caused the disturbance. Parting with our money will not pacify the conscience, the Jonah must be thrown overboard.

13-17 The mariners rowed against wind and tide, the wind of God's displeasure, the tide of his counsel; but it is in vain to think of saving ourselves any other way than by destroying our sins. Even natural conscience cannot but dread blood-guiltiness. And when we are led by Providence God does what he pleases, and we ought to be satisfied, though it may not please us. Throwing Jonah into the sea put an end to the storm. God will not afflict for ever, He will only contend till we submit and turn from our sins. Surely these heathen mariners will rise up in judgment against many called Christians, who neither offer prayers when in distress, nor thanksgiving for signal deliverances. The Lord commands all creatures, and can make any of them serve his designs of mercy to his people. Let us see this salvation of the Lord, and admire his power, that he could thus save a drowning man, and his pity, that he would thus save one who was running from him, and had offended him. It was of the Lord's mercies that Jonah was not consumed. Jonah was alive in the fish three days and nights: to nature this was impossible, but to the God of nature all things are possible. Jonah, by this miraculous preservation, was made a type of Christ; as our blessed Lord himself declared, #Mt 12:40|.

View All Discussusion for Jonah Chapter 1... 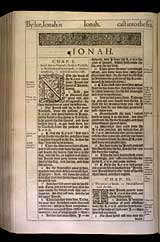