1 And as Iesus passed by, he saw a man which was blinde from his birth.

2 And his disciples asked him, saying, Master, who did sinne, this man, or his parents, that he was borne blinde?

3 Iesus answered, Neither hath this man sinned, nor his parents: but that the workes of God should be made manifest in him.

4 I must worke the workes of him that sent me, while it is day: the night commeth when no man can worke.

5 As long as I am in the world, I am the light of the world.

6 When he had thus spoken, he spat on the ground, and made clay of the spettle, and he anointed the eyes of the blinde man with the clay,

7 And said vnto him, Goe wash in the poole of Siloam (which is by interpretation, Sent.) He went his way therfore, and washed, and came seeing.

8 ¶ The neighbours therefore, and they which before had seene him, that he was blinde, said, Is not this he that sate and begged?

10 Therefore said they vnto him, How were thine eyes opened?

11 He answered and said, A man that is called Iesus, made clay, and anointed mine eyes, and said vnto me, Goe to the poole of Siloam, and wash: and I went and washed, and I receiued sight.

13 ¶ They brought to the Pharisees him that aforetime was blind.

14 And it was the Sabbath day when Iesus made the clay, and opened his eyes.

15 Then againe the Pharisees also asked him how he had receiued his sight. He said vnto them, Hee put clay vpon mine eyes, and I washed, and doe see.

16 Therefore said some of the Pharisees, This man is not of God, because hee keepeth not the Sabbath day. Others said, How can a man that is a sinner, doe such miracles? and there was a diuision among them.

17 They say vnto the blind man againe, What sayest thou of him, that he hath opened thine eyes? He said, Hee is a Prophet.

19 And they asked them, saying, Is this your sonne, who ye say was borne blind? how then doth he now see?

20 His parents answered them, and said, We know that this is our sonne, and that he was borne blind:

21 But by what meanes he now seeth, we know not, or who hath opened his eyes we know not: hee is of age, aske him, he shall speake for himselfe.

22 These words spake his parents, because they feared the Iewes: for the Iewes had agreed already, that if any man did confesse that he was Christ, he should be put out of the Synagogue.

23 Therefore said his parents, He is of age, aske him.

24 Then againe called they the man that was blind, and said vnto him, Giue God the praise, we know that this man is a sinner.

25 He answered, and said, Whether he be a sinner or no, I know not: One thing I know, that whereas I was blind, now I see.

26 Then saide they to him againe, What did he to thee? How opened hee thine eyes?

27 He answered them, I haue told you already, and ye did not heare: wherfore would you heare it againe? Will ye also be his disciples?

28 Then they reuiled him, and said, Thou art his disciple, but we are Moses disciples.

29 Wee know that God spake vnto Moses: as for this fellow, we knowe not from whence he is.

30 The man answered, and said vnto them, Why herein is a marueilous thing, that ye know not from whence he is, and yet he hath opened mine eyes.

31 Now we know that God heareth not sinners: but if any man bee a worshipper of God, and doth his will, him he heareth.

32 Since the world began was it not heard that any man opened the eyes of one that was borne blinde:

33 If this man were not of God, he could doe nothing.

34 They answered, and saide vnto him, Thou wast altogether borne in sinnes, and doest thou teach vs? And they cast him out.

35 Iesus heard that they had cast him out; and when hee had found him, he said vnto him, Doest thou beleeue on the Sonne of God?

36 He answered and said, Who is he, Lord, that I might beleeue on him?

37 And Iesus said vnto him, Thou hast both seene him, and it is he that talketh with thee.

38 And he said, Lord, I beleeue: and he worshipped him.

40 And some of the Pharisees which were with him, heard these words, and saide vnto him, Are wee blinde also?

41 Iesus saide vnto them, If yee were blind, ye should haue no sinne: but now ye say, We see, therfore your sinne remaineth.

Christ give sight to one born blind. (1-7) The account given by the blind man. (8-12) The Pharisees question the man that had been blind. (13-17) They ask concerning him. (18-23) They cast him out. (24-34) Christ's words to the man that had been blind. (35-38) He reproves the Pharisees. (39-41)1-7 Christ cured many who were blind by disease or accident; here he cured one born blind. Thus he showed his power to help in the most desperate cases, and the work of his grace upon the souls of sinners, which gives sight to those blind by nature. This poor man could not see Christ, but Christ saw him. And if we know or apprehend anything of Christ, it is because we were first known of him. Christ says of uncommon calamities, that they are not always to be looked on as special punishments of sin; sometimes they are for the glory of God, and to manifest his works. Our life is our day, in which it concerns us to do the work of the day. We must be busy, and not waste day-time; it will be time to rest when our day is done, for it is but a day. The approach of death should quicken us to improve all our opportunities of doing and getting good. What good we have an opportunity to do, we should do quickly. And he that will never do a good work till there is nothing to be objected against, will leave many a good work for ever undone, #Ec 11:4|. Christ magnified his power, in making a blind man to see, doing that which one would think more likely to make a seeing man blind. Human reason cannot judge of the Lord's methods; he uses means and instruments that men despise. Those that would be healed by Christ must be ruled by him. He came back from the pool wondering and wondered at; he came seeing. This represents the benefits in attending on ordinances of Christ's appointment; souls go weak, and come away strengthened; go doubting, and come away satisfied; go mourning, and come away rejoicing; go blind, and come away seeing.

8-12 Those whose eyes are opened, and whose hearts are cleansed by grace, being known to be the same person, but widely different in character, live as monuments to the Redeemer's glory, and recommend his grace to all who desire the same precious salvation. It is good to observe the way and method of God's works, and they will appear the more wonderful. Apply this spiritually. In the work of grace wrought upon the soul we see the change, but we see not the hand that makes it: the way of the Spirit is like that of the wind, which thou hearest the sound of, but canst not tell whence it comes, nor whither it goes.

13-17 Christ not only worked miracles on the sabbath, but in such a manner as would give offence to the Jews, for he would not seem to yield to the scribes and Pharisees. Their zeal for mere rites consumed the substantial matters of religion; therefore Christ would not give place to them. Also, works of necessity and mercy are allowed, and the sabbath rest is to be kept, in order to the sabbath work. How many blind eyes have been opened by the preaching of the gospel on the Lord's day! how many impotent souls cured on that day! Much unrighteous and uncharitable judging comes from men's adding their own fancies to God's appointments. How perfect in wisdom and holiness was our Redeemer, when his enemies could find nothing against him, but the oft-refuted charge of breaking the sabbath! May we be enabled, by well-doing, to silence the ignorance of foolish men.

18-23 The Pharisees vainly hoped to disprove this notable miracle. They expected a Messiah, but could not bear to think that this Jesus should be he, because his precepts were all contrary to their traditions, and because they expected a Messiah in outward pomp and splendour. The fear of man brings a snare, #Pr 29:25|, and often makes people deny and disown Christ and his truths and ways, and act against their consciences. The unlearned and poor, who are simple-hearted, readily draw proper inferences from the evidences of the light of the gospel; but those whose desires are another way, though ever learning, never come to the knowledge of the truth.

24-34 As Christ's mercies are most valued by those who have felt the want of them, that have been blind, and now see; so the most powerful and lasting affections to Christ, arise from actual knowledge of him. In the work of grace in the soul, though we cannot tell when, and how, and by what steps the blessed change was wrought, yet we may take the comfort, if we can say, through grace, Whereas I was blind, now I see. I did live a worldly, sensual life, but, thanks be to God, it is now otherwise with me, #Eph 5:8|. The unbelief of those who enjoy the means of knowledge and conviction, is indeed marvellous. All who have felt the power and grace of the Lord Jesus, wonder at the wilfulness of others who reject him. He argues strongly against them, not only that Jesus was not a sinner, but that he was of God. We may each of us know by this, whether we are of God or not. What do we? What do we for God? What do we for our souls? What do we more than others?

35-38 Christ owns those who own him and his truth and ways. There is particular notice taken of such a suffer in the cause of Christ, and for the testimony of a good conscience. Our Lord Jesus graciously reveals himself to the man. Now he was made sensible what an unspeakable mercy it was, to be cured of his blindness, that he might see the Son of God. None but God is to be worshipped; so that in worshipping Jesus, he owned him to be God. All who believe in him, will worship him.

39-41 Christ came into the world to give sight to those who were spiritually blind. Also, that those who see might be made blind; that those who have a high conceit of their own wisdom, might be sealed up in ignorance. The preaching of the cross was thought to be folly by such as by carnal wisdom knew not God. Nothing fortifies men's corrupt hearts against the convictions of the word, more than the high opinion which others have of them; as if all that gained applause with men, must obtain acceptance with God. Christ silenced them. But the sin of the self-conceited and self-confident remains; they reject the gospel of grace, therefore the guilt of their sin remains unpardoned, and the power of their sin remains unbroken.

View All Discussusion for John Chapter 9... 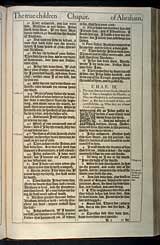