1 There was a man of the Pharisees, named Nicodemus, a ruler of þe Iewes:

2 The same came to Iesus by night, and said vnto him, Rabbi, wee know that thou art a teacher come from God: for no man can doe these miracles that thou doest, except God be with him.

3 Iesus answered, and said vnto him, Uerily, verily I say vnto thee, except a man be borne againe, he cannot see the kingdome of God.

4 Nicodemus saith vnto him, How can a man be borne when he is old? can he enter the second time into his mothers wombe, and be borne?

5 Iesus answered, Uerily, verily I say vnto thee, except a man be borne of water and of the spirit, he cannot enter into the kingdome of God.

7 Marueile not that I saide vnto thee, Ye must be borne againe.

8 The winde bloweth where it listeth, and thou hearest the sound thereof, but canst not tel whence it commeth, and whither it goeth: So is euery one that is borne of the Spirit.

9 Nicodemus answered, and said vnto him, How can these things be?

10 Iesus answered, and saide vnto him, Art thou a master of Israel, and knowest not these things?

11 Uerely, verely I say vnto thee, We speake that we doe know, and testifie that wee haue seene; and yee receiue not our witnesse.

12 If I haue tolde you earthly things, and ye beleeue not: how shall ye beleeue if I tell you of heauenly things?

13 And no man hath ascended vp to heauen, but hee that came downe from heauen, euen the Sonne of man which is in heauen.

14 ¶ And as Moses lifted vp the serpent in the wildernesse: euen so must the Sonne of man be lifted vp:

15 That whosoeuer beleeueth in him, should not perish, but haue eternall life.

16 ¶ For God so loued þe world, that he gaue his only begotten Sonne: that whosoeuer beleeueth in him, should not perish, but haue euerlasting life.

17 For God sent not his Sonne into the world to condemne the world: but that the world through him might be saued.

19 And this is the condemnation, that light is come into the world, and men loued darknesse rather then light, because their deedes were euill.

20 For euery one that doeth euill, hateth the light, neither commeth to the light, lest his deeds should be reproued.

21 But hee that doeth trueth, commeth to the light, that his deeds may be made manifest, that they are wrought in God.

22 ¶ After these things, came Iesus and his disciples into the land of Iudea, and there hee taried with them, and baptized.

23 ¶ And Iohn also was baptizing in Aenon, neere to Salim, because there was much water there: and they came, and were baptized.

24 For Iohn was not yet cast into prison.

25 ¶ Then there arose a question between some of Iohns disciples and the Iewes, about purifying.

26 And they came vnto Iohn, and said vnto him, Rabbi, he that was with thee beyond Iordane, to whom thou barest witnesse, behold, the same baptizeth, and all men come to him.

27 Iohn answered, and said, A man can receiue nothing, except it be giuen him from heauen.

28 Ye your selues beare me witnesse, that I said, I am not the Christ, but that I am sent before him.

30 Hee must increase, but I must decrease.

32 And what hee hath seene and heard, that he testifieth, and no man receiueth his testimony:

33 He that hath receiued his testimonie, hath set to his seale, that God is true.

34 For he whom God hath sent, speaketh the words of God: For God giueth not the Spirit by measure vnto him.

35 The Father loueth the Sonne, and hath giuen al things into his hand.

22-36 John was fully satisfied with the place and work assigned him; but Jesus came on a more important work. He also knew that Jesus would increase in honour and influence, for of his government and peace there would be no end, while he himself would be less followed. John knew that Jesus came from heaven as the Son of God, while he was a sinful, mortal man, who could only speak about the more plain subjects of religion. The words of Jesus were the words of God; he had the Spirit, not by measure, as the prophets, but in all fulness. Everlasting life could only be had by faith in Him, and might be thus obtained; whereas all those, who believe not in the Son of God, cannot partake of salvation, but the wrath of God for ever rests upon them.

View All Discussusion for John Chapter 3... 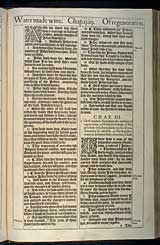