1 Then Eliphaz the Temanite answered, and said,

2 If we assay to commune with thee, wilt thou be grieued? But who can withhold himselfe from speaking?

3 Beholde, Thou hast instructed many, and thou hast strengthened the weake hands.

4 Thy words haue vpholden him that was falling, and thou hast strengthened the feeble knees.

6 Is not this thy feare, thy confidence; the vprightnesse of thy wayes and thy hope?

7 Remember, I pray thee, who euer perished, being innocent? or where were the righteous cut off?

8 Euen as I haue seene, they that plow iniquity, and sow wickednsse, reape the same.

9 By the blast of God they perish, and by the breath of his nostrils are they consumed.

11 The old Lyon perisheth for lacke of pray, and the stout Lyons whelpes are scattered abroad.

12 Nowe a thing was secretly brought to me, and mine eare receiued a litle thereof.

13 In thoughts from the visions of the night, when deepe sleepe falleth on men:

14 Feare came vpon me, and trembling, which made all my bones to shake.

15 Then a spirit passed before my face: the haire of my flesh stood vp.

16 It stood still, but I could not discerne the forme thereof: an image was before mine eyes, there was silence, and I heard a voyce, saying,

17 Shall mortall man be more iust then God? shall a man bee more pure then his maker?

18 Behold, hee put no trust in his seruants; and his Angels hee charged with folly:

19 Howe much lesse on them that dwell in houses of clay, whose foundation is in the dust, which are crushed before the moth.

20 They are destroyed from morning to euening: they perish for euer, without any regarding it.

21 Doeth not their excellencie which is in them, goe away? they die, euen without wisedome.

Eliphaz reproves Job. (1-6) And maintains that God's judgments are for the wicked. (7-11) The vision of Eliphaz. (12-21)1-6 Satan undertook to prove Job a hypocrite by afflicting him; and his friends concluded him to be one because he was so afflicted, and showed impatience. This we must keep in mind if we would understand what passed. Eliphaz speaks of Job, and his afflicted condition, with tenderness; but charges him with weakness and faint-heartedness. Men make few allowances for those who have taught others. Even pious friends will count that only a touch which we feel as a wound. Learn from hence to draw off the mind of a sufferer from brooding over the affliction, to look at the God of mercies in the affliction. And how can this be done so well as by looking to Christ Jesus, in whose unequalled sorrows every child of God soonest learns to forget his own?

7-11 Eliphaz argues, 1. That good men were never thus ruined. But there is one event both to the righteous and to the wicked, #Ec 9:2|, both in life and death; the great and certain difference is after death. Our worst mistakes are occasioned by drawing wrong views from undeniable truths. 2. That wicked men were often thus ruined: for the proof of this, Eliphaz vouches his own observation. We may see the same every day.

12-21 Eliphaz relates a vision. When we are communing with our own hearts, and are still, #Ps 4:4|, then is a time for the Holy Spirit to commune with us. This vision put him into very great fear. Ever since man sinned, it has been terrible to him to receive communications from Heaven, conscious that he can expect no good tidings thence. Sinful man! shall he pretend to be more just, more pure, than God, who being his Maker, is his Lord and Owner? How dreadful, then, the pride and presumption of man! How great the patience of God! Look upon man in his life. The very foundation of that cottage of clay in which man dwells, is in the dust, and it will sink with its own weight. We stand but upon the dust. Some have a higher heap of dust to stand upon than others but still it is the earth that stays us up, and will shortly swallow us up. Man is soon crushed; or if some lingering distemper, which consumes like a moth, be sent to destroy him, he cannot resist it. Shall such a creature pretend to blame the appointments of God? Look upon man in his death. Life is short, and in a little time men are cut off. Beauty, strength, learning, not only cannot secure them from death, but these things die with them; nor shall their pomp, their wealth, or power, continue after them. Shall a weak, sinful, dying creature, pretend to be more just than God, and more pure than his Maker? No: instead of quarrelling with his afflictions, let him wonder that he is out of hell. Can a man be cleansed without his Maker? Will God justify sinful mortals, and clear them from guilt? or will he do so without their having an interest in the righteousness and gracious help of their promised Redeemer, when angels, once ministering spirits before his throne, receive the just recompence of their sins? Notwithstanding the seeming impunity of men for a short time, though living without God in the world, their doom is as certain as that of the fallen angels, and is continually overtaking them. Yet careless sinners note it so little, that they expect not the change, nor are wise to consider their latter end.

View All Discussusion for Job Chapter 4... 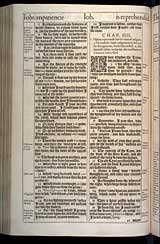