1 After this, opened Iob his mouth, and cursed his day.

3 Let the day perish, wherein I was borne, and the night in which it was said, There is a man-childe conceiued.

4 Let that day bee darkenesse, let not God regard it from aboue, neither let the light shine vpon it.

5 Let darkenes and the shadowe of death staine it, let a cloud dwell vpon it, let the blacknes of the day terrifie it.

6 As for that night, let darkenesse seaze vpon it, let it not be ioyned vnto the dayes of the yeere, let it not come into the number of the moneths.

8 Let them curse it that curse the day, who are ready to raise vp their mourning.

9 Let the starres of the twilight thereof be darke, let it looke for light, but haue none, neither let it see the dawning of the day:

10 Because it shut not vp the doores of my mothers wombe, nor hid sorrowe from mine eyes.

11 Why died I not from the wombe? why did I not giue vp the ghost when I came out of the bellie?

12 Why did the knees preuent mee? or why the breasts, that I should sucke?

13 For now should I haue lien still and beene quiet, I should haue slept; then had I bene at rest,

14 With Kings and counsellers of the earth, which built desolate places for themselues,

15 Or with Princes that had golde, who filled their houses with siluer:

16 Or as an hidden vntimely birth, I had not bene; as infants which neuer saw light.

17 There the wicked cease from troubling: and there the wearie be at rest.

18 There the prisoners rest together, they heare not the voice of the oppressour.

19 The small and great are there, and the seruant is free from his master.

20 Wherefore is light giuen to him that is in misery, and life vnto the bitter in soule?

21 Which long for death, but it commeth not, and dig for it more then for hid treasures:

22 Which reioice exceedingly, and are glad when they can finde the graue?

23 Why is light giuen to a man, whose way is hid, and whom God hath hedged in?

24 For my sighing commeth before I eate, and my roarings are powred out like the waters.

25 For the thing which I greatly feared is come vpon me, and that which I was afraid of, is come vnto me.

26 I was not in safetie, neither had I rest, neither was I quiet: yet trouble came.

Job complains that he was born. (1-10) Job complaining. (11-19) He complains of his life. (20-26)1-10 For seven days Job's friends sat by him in silence, without offering consolidation: at the same time Satan assaulted his mind to shake his confidence, and to fill him with hard thoughts of God. The permission seems to have extended to this, as well as to torturing the body. Job was an especial type of Christ, whose inward sufferings, both in the garden and on the cross, were the most dreadful; and arose in a great degree from the assaults of Satan in that hour of darkness. These inward trials show the reason of the change that took place in Job's conduct, from entire submission to the will of God, to the impatience which appears here, and in other parts of the book. The believer, who knows that a few drops of this bitter cup are more dreadful than the sharpest outward afflictions, while he is favoured with a sweet sense of the love and presence of God, will not be surprised to find that Job proved a man of like passions with others; but will rejoice that Satan was disappointed, and could not prove him a hypocrite; for though he cursed the day of his birth, he did not curse his God. Job doubtless was afterwards ashamed of these wishes, and we may suppose what must be his judgment of them now he is in everlasting happiness.

11-19 Job complained of those present at his birth, for their tender attention to him. No creature comes into the world so helpless as man. God's power and providence upheld our frail lives, and his pity and patience spared our forfeited lives. Natural affection is put into parents' hearts by God. To desire to die that we may be with Christ, that we may be free from sin, is the effect and evidence of grace; but to desire to die, only that we may be delivered from the troubles of this life, savours of corruption. It is our wisdom and duty to make the best of that which is, be it living or dying; and so to live to the Lord, and die to the Lord, as in both to be his, #Ro 14:8|. Observe how Job describes the repose of the grave; There the wicked cease from troubling. When persecutors die, they can no longer persecute. There the weary are at rest: in the grave they rest from all their labours. And a rest from sin, temptation, conflict, sorrows, and labours, remains in the presence and enjoyment of God. There believers rest in Jesus, nay, as far as we trust in the Lord Jesus and obey him, we here find rest to our souls, though in the world we have tribulation.

20-26 Job was like a man who had lost his way, and had no prospect of escape, or hope of better times. But surely he was in an ill frame for death when so unwilling to live. Let it be our constant care to get ready for another world, and then leave it to God to order our removal thither as he thinks fit. Grace teaches us in the midst of life's greatest comforts, to be willing to die, and in the midst of its greatest crosses, to be willing to live. Job's way was hid; he knew not wherefore God contended with him. The afflicted and tempted Christian knows something of this heaviness; when he has been looking too much at the things that are seen, some chastisement of his heavenly Father will give him a taste of this disgust of life, and a glance at these dark regions of despair. Nor is there any help until God shall restore to him the joys of his salvation. Blessed be God, the earth is full of his goodness, though full of man's wickedness. This life may be made tolerable if we attend to our duty. We look for eternal mercy, if willing to receive Christ as our Saviour.

View All Discussusion for Job Chapter 3... 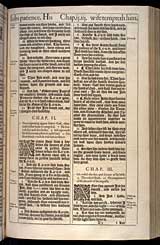