2 There shall bee no more prayse of Moab: in Heshbon they haue deuised euill against it; come and let vs cut it off from being a nation; also thou shalt bee cut downe, O Madmen, the sword shall pursue thee.

3 A voice of crying shall be from Horonaim; Spoiling & great destruction.

4 Moab is destroyed, her little ones haue caused a crie to be heard.

6 Flee, saue your liues, and be like the heath in the wildernesse.

7 ¶ For because thou hast trusted in thy workes, and in thy treasures, thou shalt also be taken, and Chemosh shall goe foorth into captiuitie with his priests and his princes together.

8 And the spoyler shall come vpon euery citie, and no citie shall escape: the valley also shal perish, & the plaine shall be destroyed, as þe Lord hath spoken.

9 Giue wings vnto Moab, that it may flee and get away: for the cities thereof shalbe desolate, without any to dwell therein.

11 ¶ Moab hath bene at ease from his youth, and hee hath setled on his lees, and hath not been emptied from vessell to vessell, neither hath he gone into captiuitie: therefore his taste remained in him, and his sent is not changed.

12 Therfore behold, the dayes come, sayth the Lord, that I will send vnto him wanderers that shall cause him to wander, and shall emptie his vessels, and breake their bottles.

13 And Moab shall bee ashamed of Chemosh, as the house of Israel was ashamed of Bethel their confidence.

14 ¶ How say yee, We are mightie and strong men for the warre?

15 Moab is spoiled and gone vp out of her cities, and his chosen yong men are gone downe to the slaughter, sayth the King, whose Name is the Lord of hostes.

16 The calamitie of Moab is neere to come, and his affliction hasteth fast.

17 All yee that are about him bemoane him, and all yee that know his Name, say, How is the strong staffe broken, and the beautifull rod!

18 Thou daughter that doest inhabit Dibon, come downe from thy glory, and sit in thirst; for the spoiler of Moab shall come vpon thee, and he shall destroy thy strong holdes.

19 O inhabitant of Aroer, stand by the way and espie, aske him that fleeth, and her that escapeth, and say, What is done?

20 Moab is confounded, for it is broken downe: howle and cry, tell ye it in Arnon, that Moab is spoiled,

21 And iudgement is come vpon the plaine countrey, vpon Holon, and vpon Iahazah, and vpon Mephaath,

22 And vpon Dibon, and vpon Nebo, and vpon Beth-diblathaim,

24 And vpon Kerioth, and vpon Bozrah, and vpon all the cities of the land of Moab farre or neere.

25 The horne of Moab is cut off, & his arme is broken, saith the Lord.

26 ¶ Make ye him drunken: for hee magnified himselfe against the Lord: Moab also shall wallow in his vomit, and he also shalbe in derision.

27 For was not Israel a derision vnto thee? was hee found among theeues? for since thou spakest of him, thou skippedst for ioy.

28 O yee that dwell in Moab, leaue the cities and dwell in the rocke, and be like the doue that maketh her nest in the sides of the holes mouth.

29 We haue heard the pride of Moab, (he is exceeding proud) his loftinesse and his arrogancie, and his pride, and the hautinesse of his heart.

30 I knowe his wrath, sayeth the Lord, but it shall not be so, his lyes shall not so effect it.

31 Therefore will I howle for Moab, and I will cry out for all Moab, mine heart shall mourne for the men of Kir-heres.

32 O vine of Sibmah, I wil weepe for thee, with the weeping of Iazer; thy plants are gone ouer the sea, they reach euen to the sea of Iazer, the spoiler is fallen vpon thy summer fruits, and vpon thy vintage.

33 And ioy and gladnesse is taken from the plentifull field, and from the land of Moab, and I haue caused wine to faile from the winepresses, none shall tread with shouting, their showting shall be no showting.

34 From the cry of Heshbon euen vnto Elealeh, and euen vnto Iahaz haue they vttered their voyce, from Zoar euen vnto Horonaim as an heifer of three yeeres old: for the waters also of Nimrim shall be desolate.

35 Moreouer, I will cause to cease in Moab, saith the Lord, him that offereth in the high places, and him that burneth incense to his Gods.

37 For euery head shall be bald, and euery beard clipt: vpon all the hands shall be cuttings, and vpon the loines sackcloth.

38 There shall be lamentation generally vpon all the house toppes of Moab, and in the streetes thereof: for I haue broken Moab like a vessell, wherin is no pleasure, saith the Lord.

39 They shall howle, saying; How is it broken downe? how hath Moab turned the backe with shame? so shall Moab be a derision, and a dismaying to all them about him.

40 For thus saith the Lord, Behold, hee shall fly as an eagle, and shall spread his wings ouer Maob.

41 Kerioth is taken, and the strong holds are surprised, & the mighty mens hearts in Moab at that day shall be as the heart of a woman in her pangs.

42 And Moab shall be destroyed from being a people, because he hath magnified himselfe against the Lord.

43 Feare, and the pit, and the snare shall be vpon thee, O inhabitant of Moab, saith the Lord.

44 Hee that fleeth from the feare shall fall into the pit, and he that getteth vp out of the pit shall be taken in the snare: for I will bring vpon it, euen vpon Moab, the yeere of their visitation, saith the Lord.

45 They that fled, stood vnder the shadow of Heshbon, because of the force: but a fire shall come forth out of Heshbon, and a flame from the middest of Sihon, and shall deuoure the corner of Moab, and the crowne of the head of the tumultuous ones.

46 Woe be vnto thee, O Moab, the people of Chemosh perisheth: for thy sonnes are taken captiues, and thy daughters captiues.

47 ¶ Yet will I bring againe the captiuitie of Moab in the later dayes, saith the Lord. Thus farre is the iudgement of Moab.

Prophecies against Moab for pride and security. (1-13) For carnal confidence and contempt of God. (14-47)1-13. The Chaldeans are to destroy the Moabites. We should be thankful that we are required to seek the salvation of men's lives, and the salvation of their souls, not to shed their blood; but we shall be the more without excuse if we do this pleasant work deceitfully. The cities shall be laid in ruins, and the country shall be wasted. There will be great sorrow. There will be great hurry. If any could give wings to sinners, still they could not fly out of the reach of Divine indignation. There are many who persist in unrepented iniquity, yet long enjoy outward prosperity. They had been long corrupt and unreformed, secure and sensual in prosperity. They have no changes of their peace and prosperity, therefore their hearts and lives are unchanged, #Ps 55:19|.

14-47. The destruction of Moab is further prophesied, to awaken them by national repentance and reformation to prevent the trouble, or by a personal repentance and reformation to prepare for it. In reading this long roll of threatenings, and mediating on the terror, it will be of more use to us to keep in view the power of God's anger and the terror of his judgments, and to have our hearts possessed with a holy awe of God and of his wrath, than to search into all the figures and expressions here used. Yet it is not perpetual destruction. The chapter ends with a promise of their return out of captivity in the latter days. Even with Moabites God will not contend for ever, nor be always wroth. The Jews refer it to the days of the Messiah; then the captives of the Gentiles, under the yoke of sin and Satan, shall be brought back by Divine grace, which shall make them free indeed.

View All Discussusion for Jeremiah Chapter 48... 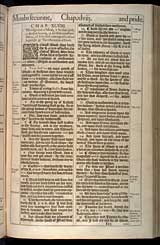