1 The worde that came to Ieremiah from the Lord in the tenth yeere of Zedekiah king of Iudah, which was the eighteenth yeere of Nebuchad-rezzar.

2 For then the king of Babylons armie besieged Ierusalem: and Ieremiah the prophet was shut vp in the court of the prison which was in the king of Iudahs house.

3 For Zedekiah king of Iudah had shut him vp, saying, Wherefore doest thou prophecie and say, Thus saith the Lord, Behold, I will giue this citie into the hand of the king of Babylon, and hee shall take it?

4 And Zedekiah king of Iudah, shal not escape out of the hand of the Caldeans, but shall surely be deliuered into the hand of the king of Babylon, and shal speake with him mouth to mouth, and his eyes shall behold his eyes.

5 And he shall lead Zedekiah to Babylon, and there shall he be vntill I visit him, saith the Lord: though ye fight with the Caldeans, yee shall not prosper.

6 ¶ And Ieremiah said; The word of the Lord came vnto me, saying;

7 Behold, Hanameel the sonne of Shallum thine vncle, shall come vnto thee, saying; Buy thee my field that is in Anathoth: for the right of redemption is thine to buy it.

8 So Hanameel mine vncles sonne came to me in the court of the prison, according to the word of the Lord, and said vnto me; Buy my field, I pray thee, that is in Anathoth, which is in the countrey of Beniamin: for the right of inheritance is thine, and the redemption is thine, buy it for thy selfe. Then I knew that this was the word of the Lord.

9 And I bought the field of Hanameel my vncles sonne, that was in Anathoth, and weighed him the money, euen seuenteene shekels of siluer.

10 And I subscribed the euidence, and sealed it, and tooke witnesses, and weighed him the money in the ballances.

13 ¶ And I charged Baruch before them, saying,

14 Thus saith the Lord of hosts the God of Israel; Take these euidences, this euidence of the purchase, both which is sealed, and this euidence which is open, and put them in an earthen vessell, that they may continue many daies.

15 For thus saith the Lord of hostes the God of Israel; Houses and fields, and Uineyards shalbe possessed againe in this land.

16 ¶ Now when I had deliuered the euidence of the purchase vnto Baruch the sonne of Neriah, I prayed vnto the Lord, saying,

17 Ah Lord God, beholde, thou hast made the heauen and the earth by thy great power & stretched out arme, and there is nothing too hard for thee.

18 Thou shewest louing kindnesse vnto thousands, and recompensest the iniquitie of the fathers into the bosome of their children after them: the great, the mightie God, the Lord of hosts is his Name,

19 Great in counsell, and mightie in worke, (for thine eyes are open vpon all the wayes of the sonnes of men, to giue euery one according to his wayes, and according to the fruit of his doings)

20 Which hast set signes and wonders in the land of Egypt, euen vnto this day, and in Israel, and amongst other men, and hast made thee a Name, as at this day,

21 And hast brought foorth thy people Israel out of the land of Egypt, with signes and with wonders, and with a strong hand, and with a stretched out arme, and with great terrour,

22 And hast giuen them this land which thou didst sweare to their fathers to giue them a land flowing with milke and honie.

23 And they came in and possessed it, but they obeied not thy voice, neither walked in thy Law, they haue done nothing of all that thou commaundedst them to doe: therefore thou hast caused all this euill to come vpon them.

24 Beholde the mounts, they are come vnto the citie to take it, and the citie is giuen into the hand of the Caldeans that fight against it, because of the sword, and of the famine, and of the pestilence, and what thou hast spoken is come to passe, and behold, thou seest it.

25 And thou hast said vnto mee, O Lord God, buy thee the field for money, and take witnesses: for the citie is giuen into the hand of the Caldeans.

26 ¶ Then came the word of the Lord vnto Ieremiah, saying,

27 Behold, I am the Lord, the God of all flesh: Is there any thing too hard for me?

29 And the Caldeans that fight against this citie, shall come and set fire on this citie, and burne it with the houses vpon whose roofes they haue offered incense vnto Baal, and powred out drinke offerings vnto other Gods to prouoke me to anger.

31 For this citie hath beene to me, as a prouocation of mine anger, and of my furie, from the day that they built it, euen vnto this day; that I should remooue it from before my face:

33 And they haue turned vnto mee the backe, and not the face, though I taught them rising vp early, and teaching them, yet they haue not hearkened to receiue instruction,

34 But they set their abominations in the house (which is called by my Name) to defile it.

35 And they built the high places of Baal, which are in the valley of the sonne of Hinnom, to cause their sonnes and their daughters to passe through the fire vnto Molech, which I commanded them not, neither came it into my minde, that they should doe this abomination, to cause Iudah to sinne.

36 ¶ And now therefore, thus sayth the Lord the God of Israel concerning this citie, whereof ye say, It shall be deliuered into the hand of the king of Babylon, by the sword, and by the famine, and by the pestilence:

37 Behold, I wil gather them out of all countreys, whither I haue driuen them in mine anger, and in my furie, and in great wrath, and I will bring them againe vnto this place; and I will cause them to dwell safely.

38 And they shalbe my people, and I will be their God.

39 And I will giue them one heart, and one way, that they may feare mee for euer, for the good of them, and of their children after them.

40 And I will make an euerlasting couenant with them, that I will not turne away from them, to doe them good, but I will put my feare in their hearts, that they shall not depart from mee.

41 Yea, I will reioyce oner them to doe them good, and I will plant them in this land assuredly, with my whole heart, and with my whole soule.

42 For thus sayth the Lord, Like as I haue brought all this great euill vpon this people, so will I bring vpon them all the good that I haue promised them.

43 And fields shalbe bought in this land whereof ye say, It is desolate without man or beast, it is giuen into the hand of the Caldeans.

Jeremiah buys a field. (1-15) The prophet's prayer. (16-25) God declares that he will give up his people, but promises to restore them. (26-44)1-15 Jeremiah, being in prison for his prophecy, purchased a piece of ground. This was to signify, that though Jerusalem was besieged, and the whole country likely to be laid waste, yet the time would come, when houses, and fields, and vineyards, should be again possessed. It concerns ministers to make it appear that they believe what they preach to others. And it is good to manage even our worldly affairs in faith; to do common business with reference to the providence and promise of God.

16-25 Jeremiah adores the Lord and his infinite perfections. When at any time we are perplexed about the methods of Providence, it is good for us to look to first principles. Let us consider that God is the fountain of all being, power, and life; that with him no difficulty is such as cannot be overcome; that he is a God of boundless mercy; that he is a God of strict justice; and that he directs every thing for the best. Jeremiah owns that God was righteous in causing evil to come upon them. Whatever trouble we are in, personal or public, we may comfort ourselves that the Lord sees it, and knows how to remedy it. We must not dispute God's will, but we may seek to know what it means.

26-44 God's answer discovers the purposes of his wrath against that generation of the Jews, and the purposes of his grace concerning future generations. It is sin, and nothing else, that ruins them. The restoration of Judah and Jerusalem is promised. This people were now at length brought to despair. But God gives hope of mercy which he had in store for them hereafter. Doubtless the promises are sure to all believers. God will own them for his, and he will prove himself theirs. He will give them a heart to fear him. All true Christians shall have a disposition to mutual love. Though they may have different views about lesser things, they shall all be one in the great things of God; in their views of the evil of sin, and the low estate of fallen man, the way of salvation through the Saviour, the nature of true holiness, the vanity of the world, and the importance of eternal things. Whom God loves, he loves to the end. We have no reason to distrust God's faithfulness and constancy, but only our own hearts. He will settle them again in Canaan. These promises shall surely be performed. Jeremiah's purchase was the pledge of many a purchase that should be made after the captivity; and those inheritances are but faint resemblances of the possessions in the heavenly Canaan, which are kept for all who have God's fear in their hearts, and do not depart from him. Let us then bear up under our trials, assured we shall obtain all the good he has promised us.

View All Discussusion for Jeremiah Chapter 32... 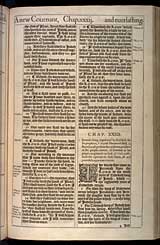