1 The word that came to Ieremiah from the Lord, saying,

2 Heare yee the words of this Couenant, and speake vnto the men of Iudah, and to the inhabitants of Ierusalem.

3 And say thou vnto them, Thus saith the Lord God of Israel, Cursed bee the man that obeyeth not the words of this Couenant,

4 Which I commaunded your fathers in the day that I brought them foorth out of the land of Egypt, from the yron furnace, saying, Obey my voyce, and doe them, according to all which I command you: so shall yee be my people, and I will be your God.

5 That I may performe the othe which I haue sworne vnto your fathers, to giue them a land flowing with milke and honie, as it is this day: then answered I, and said, So bee it, O Lord.

6 Then the Lord said vnto me, Proclaime all these wordes in the cities of Iudah, and in the streets of Ierusalem, saying, Heare ye the words of this Couenant, and doe them.

7 For I earnestly protested vnto your fathers, in the day that I brought them vp out of the land of Egypt, euen vnto this day, rising earely and protesting, saying, Obey my voice.

8 Yet they obeyed not, nor inclined their eare: but walked euery one in the imagination of their euill heart: therefore I will bring vpon them all the words of this Couenant, which I commaunded them to doe; but they did them not.

9 And the Lord said vnto me, A conspiracie is found among the men of Iudah, and among the inhabitants of Ierusalem.

10 They are turned backe to the iniquities of their forefathers, which refused to heare my wordes: and they went after other gods to serue them: the house of Israel, and the house of Iudah haue broken my Couenant, which I made with their fathers.

11 ¶ Therefore thus sayeth the Lord, Behold, I will bring euill vpon them which they shall not be able to escape; and though they shall crie vnto mee, I will not hearken vnto them.

12 Then shall the cities of Iudah, and inhabitants of Ierusalem goe, and crie vnto the gods vnto whom they offer incense; but they shall not saue them at all in the time of their trouble.

14 Therefore pray not thou for this people, neither lift vp a cry or prayer for them: for I will not heare them in the time that they crie vnto mee for their trouble.

15 What hath my beloued to doe in mine house, seeing shee hath wrought lewdnesse with many? and the holy flesh is passed from thee: when thou doest euill, then thou reioycest.

16 The Lord called thy name, A greene oliue tree, faire and of goodly fruite: with the noise of a great tumult hee hath kindled fire vpon it, and the branches of it are broken.

18 ¶ And the Lord hath giuen mee knowledge of it, and I knowe it, then thou shewedst me their doings.

19 But I was like a lambe or an oxe that is brought to the slaughter, and I knew not that they had deuised deuices against me, saying; Let vs destroy the tree with the fruit thereof, and let vs cut him off from the land of the liuing, that his name may be no more remembred.

20 But, O Lord of hostes, that iudgest righteously, that tryest the reines, and the heart; let me see thy vengeance on them, for vnto thee haue I reuealed my cause.

21 Therefore thus saith the Lord of the men of Anathoth, that seeke thy life, saying; Prophecie not in the Name of the Lord, that thou die not by our hand:

22 Therefore thus saith the Lord of hosts, Behold, I wil punish them: the young men shall die by the sword, their sonnes and their daughters shall die by famine.

23 And there shall be no remnant of them, for I will bring euill vpon the men of Anathoth, euen the yere of their visitation.

The disobedient Jews reproved. (1-10) Their utter ruin. (11-17) The people would be destroyed who sought the prophet's life. (18-23)1-10 God never promised to bestow blessings on his rational creatures, while they persist in wilful disobedience. Pardon and acceptance are promised freely to all believers; but no man can be saved who does not obey the command of God to repent, to believe in Christ, to separate from sin and the world, to choose self-denial and newness of life. In general, men will hearken to those who speak of doctrines, promises, and privileges; but when duties are mentioned, they will not bend their ear.

11-17 Evil pursues sinners, and entangles them in snares, out of which they cannot free themselves. Now, in their distress, their many gods and many altars stand them in no stead. And those whose own prayers will not be heard, cannot expect benefit from the prayers of others. Their profession of religion shall prove of no use. When trouble came upon them, they made this their confidence, but God has rejected it. His altar shall yield them no satisfaction. The remembrance of God's former favours to them shall be no comfort under troubles; and his remembrance of them shall be no argument for their relief. Every sin against the Lord is a sin against ourselves, and so it will be found sooner or later.

18-23 The prophet Jeremiah tells much concerning himself, the times he lived in being very troublesome. Those of his own city plotted how they might cause his death. They thought to end his days, but he outlived most of his enemies; they thought to blast his memory, but it lives to this day, and will be blessed while time lasts. God knows all the secret designs of his and his people's enemies, and can, when he pleases, make them known. God's justice is a terror to the wicked, but a comfort to the godly. When we are wronged, we have a God to commit our cause to, and it is our duty to commit it to him. We should also look well to our own spirits, that we are not overcome with evil, but that by patient continuance in praying for our enemies, and in kindness to them, we may overcome evil with good.

View All Discussusion for Jeremiah Chapter 11... 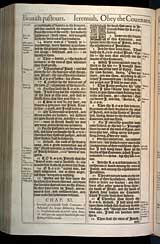