1 Neuerthelesse the dimnesse shall not be such as was in her vexation; when at the first he lightly afflicted the land of Zebulun, and the land of Naphtali, and afterward did more grieuously afflict her by the way of the Sea, beyond Iordan in Galile of the nations.

2 The people that walked in darknesse, haue seene a great light: they that dwel in the land of the shadow of death, vpon them hath the light shined.

3 Thou hast multiplied the nation, and not increased the ioy: they ioy before thee, according to the ioy in haruest, and as men reioyce when they diuide the spoile.

4 For thou hast broken the yoke of his burden, and the staffe of his shoulder, the rod of his oppressour, as in the day of Midian.

5 For euery battell of the warriour is with confused noise, and garments rolled in blood; but this shall be with burning and fewell of fire.

6 For vnto vs a child is borne, vnto vs a Sonne is giuen, and the gouernment shalbe vpon his shoulder: and his name shalbe called, Wonderfull, Counseller, The mightie God, The euerlasting Father, The Prince of peace.

7 Of the increase of his gouernment and peace there shall be no end, vpon the throne of Dauid & vpon his kingdome, to order it, and to stablish it with iudgement and with iustice, from henceforth euen for euer: the zeale of the Lord of hostes will performe this.

8 ¶ The Lord sent a word into Iacob, and it hath lighted vpon Israel.

9 And all the people shal know, euen Ephraim and the inhabitant of Samaria, that say in the pride and stoutnesse of heart;

11 Therefore the Lord shall set vp the aduersaries of Rezin against him, and ioyne his enemies together.

12 The Syrians before, and the Philistines behinde, and they shall deuoure Israel with open mouth: for all this his anger is not turned away, but his hand is stretched out still.

13 ¶ For the people turneth not vnto him that smiteth them, neither doe they seeke the Lord of hostes.

14 Therefore the Lord will cut off from Israel head and taile, branch and rush in one day.

15 The ancient and honourable, hee is the head: and the prophet that teacheth lies, he is the taile.

16 For the leaders of this people cause them to erre, and they that are ledde of them, are destroyed.

17 Therfore the Lord shall haue no ioy in their yong men, neither shall haue mercy on their fatherlesse & widowes: for euery one is an hypocrite, and an euil doer, and euery mouth speaketh folly: for all this his anger is not turned away, but his hand is stretched out still.

18 ¶ For wickednes burneth as the fire: it shall deuoure the briers and thornes, and shall kindle in the thickets of the forrest, and they shall mount vp like the lifting vp of smoke.

19 Through the wrath of the Lord of hosts is the land darkened, and the people shall be as the fuell of the fire: no man shall spare his brother.

21 Manasseh, Ephraim: and Ephraim, Manasseh: and they together shalbe against Iudah: for all this his anger is not turned away, but his hand is stretched out still.

The Son that should be born, and his kingdom. (1-7) The judgments to come upon Israel, and on the enemies of the kingdom of Christ. (8-21)1-7 The Syrians and Assyrians first ravaged the countries here mentioned, and that region was first favoured by the preaching of Christ. Those that want the gospel, walk in darkness, and in the utmost danger. But when the gospel comes to any place, to any soul, light comes. Let us earnestly pray that it may shine into our hearts, and make us wise unto salvation. The gospel brings joy with it. Those who would have joy, must expect to go through hard work, as the husbandman, before he has the joy of harvest; and hard conflict, as the soldier, before he divides the spoil. The Jews were delivered from the yoke of many oppressors; this was a shadow of the believer's deliverance from the yoke of Satan. The cleansing the souls of believers from the power and pollution of sin, would be by the influence of the Holy Spirit, as purifying fire. These great things for the church, shall be done by the Messiah, Emmanuel. The Child is born; it was certain; and the church, before Christ came in the flesh, benefitted by his undertaking. It is a prophecy of him and of his kingdom, which those that waited for the Consolation of Israel read with pleasure. This Child was born for the benefit of us men, of us sinners, of all believers, from the beginning to the end of the world. Justly is he called Wonderful, for he is both God and man. His love is the wonder of angels and glorified saints. He is the Counsellor, for he knew the counsels of God from eternity; and he gives counsel to men, in which he consults our welfare. He is the Wonderful Counsellor; none teaches like him. He is God, the mighty One. Such is the work of the Mediator, that no less power than that of the mighty God could bring it to pass. He is God, one with the Father. As the Prince of Peace, he reconciles us to God; he is the Giver of peace in the heart and conscience; and when his kingdom is fully established, men shall learn war no more. The government shall be upon him; he shall bear the burden of it. Glorious things are spoken of Christ's government. There is no end to the increase of its peace, for the happiness of its subjects shall last for ever. The exact agreement of this prophecy with the doctrine of the New Testament, shows that Jewish prophets and Christian teachers had the same view of the person and salvation of the Messiah. To what earthly king or kingdom can these words apply? Give then, O Lord, to thy people to know thee by every endearing name, and in every glorious character. Give increase of grace in every heart of thy redeemed upon earth.

8-21 Those are ripening apace for ruin, whose hearts are unhumbled under humbling providences. For that which God designs, in smiting us, is, to turn us to himself; and if this point be not gained by lesser judgments, greater may be expected. The leaders of the people misled them. We have reason to be afraid of those that speak well of us, when we do ill. Wickedness was universal, all were infected with it. They shall be in trouble, and see no way out; and when men's ways displease the Lord, he makes even their friends to be at war with them. God would take away those they thought to have help from. Their rulers were the head. Their false prophets were the tail and the rush, the most despicable. In these civil contests, men preyed on near relations who were as their own flesh. The people turn not to Him who smites them, therefore he continues to smite: for when God judges, he will overcome; and the proudest, stoutest sinner shall either bend or break.

View All Discussusion for Isaiah Chapter 9... 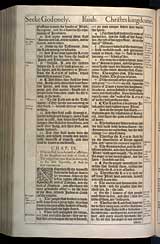