1 Who hath beleeued our report? and to whom is the arme of the Lord reuealed?

2 For he shall grow vp before him as a tender plant, and as a root out of a drie ground: hee hath no forme nor comelinesse: and when wee shall see him, there is no beautie that we should desire him.

3 He is despised and reiected of men, a man ofsorrows, and acquainted with griefe: and we hid as it were our faces from him; hee was despised, and wee esteemed him not.

4 ¶ Surely he hath borne our griefes, and caried our sorrowes: yet we did esteeme him striken, smitten of God, and afflicted.

5 But he was wounded for our transgressions, he was bruised for our iniquities: the chastisement of our peace was vpon him, and with his stripes we are healed.

6 All we like sheepe haue gone astray: we haue turned euery one to his owne way, and the Lord hath layd on him the iniquitie of vs all.

7 He was oppressed, and he was afflicted, yet he opened not his mouth: he is brought as a lambe to the slaughter, and as a sheepe before her shearers is dumme, so he openeth not his mouth.

8 He was taken from prison, and from iudgement: and who shall declare his generation? for he was cut off out of the land of the liuing, for the transgression of my people was he stricken.

9 And he made his graue with the wicked, and with the rich in his death, because he had done no violence, neither was any deceit in his mouth.

10 ¶ Yet it pleased the Lord to bruise him, he hath put him to griefe: when thou shalt make his soule an offring for sinne, he shall see his seede, hee shall prolong his daies, and the pleasure of the Lord shall prosper in his hand.

11 He shall see of the trauell of his soule, and shalbe satisfied: by his knowledge shall my righteous seruant iustifie many: for hee shall beare their iniquities.

12 Therefore will I diuide him a portion with the great, and he shall diuide the spoile with the strong: because hee hath powred out his soule vnto death: and he was numbred with the transgressours, and he bare the sinne of many, and made intercession for the transgressours.

The person. (1-3) sufferings. (4-9) humiliation, and exaltation of Christ, are minutely described; with the blessings to mankind from his death. (10-12)1-3 No where in all the Old Testament is it so plainly and fully prophesied, that Christ ought to suffer, and then to enter into his glory, as in this chapter. But to this day few discern, or will acknowledge, that Divine power which goes with the word. The authentic and most important report of salvation for sinners, through the Son of God, is disregarded. The low condition he submitted to, and his appearance in the world, were not agreeable to the ideas the Jews had formed of the Messiah. It was expected that he should come in pomp; instead of that, he grew up as a plant, silently, and insensibly. He had nothing of the glory which one might have thought to meet with him. His whole life was not only humble as to outward condition, but also sorrowful. Being made sin for us, he underwent the sentence sin had exposed us to. Carnal hearts see nothing in the Lord Jesus to desire an interest in him. Alas! by how many is he still despised in his people, and rejected as to his doctrine and authority!

4-9 In these verses is an account of the sufferings of Christ; also of the design of his sufferings. It was for our sins, and in our stead, that our Lord Jesus suffered. We have all sinned, and have come short of the glory of God. Sinners have their beloved sin, their own evil way, of which they are fond. Our sins deserve all griefs and sorrows, even the most severe. We are saved from the ruin, to which by sin we become liable, by laying our sins on Christ. This atonement was to be made for our sins. And this is the only way of salvation. Our sins were the thorns in Christ's head, the nails in his hands and feet, the spear in his side. He was delivered to death for our offences. By his sufferings he purchased for us the Spirit and grace of God, to mortify our corruptions, which are the distempers of our souls. We may well endure our lighter sufferings, if He has taught us to esteem all things but loss for him, and to love him who has first loved us.

10-12 Come, and see how Christ loved us! We could not put him in our stead, but he put himself. Thus he took away the sin of the world, by taking it on himself. He made himself subject to death, which to us is the wages of sin. Observe the graces and glories of his state of exaltation. Christ will not commit the care of his family to any other. God's purposes shall take effect. And whatever is undertaken according to God's pleasure shall prosper. He shall see it accomplished in the conversion and salvation of sinners. There are many whom Christ justifies, even as many as he gave his life a ransom for. By faith we are justified; thus God is most glorified, free grace most advanced, self most abased, and our happiness secured. We must know him, and believe in him, as one that bore our sins, and saved us from sinking under the load, by taking it upon himself. Sin and Satan, death and hell, the world and the flesh, are the strong foes he has vanquished. What God designed for the Redeemer he shall certainly possess. When he led captivity captive, he received gifts for men, that he might give gifts to men. While we survey the sufferings of the Son of God, let us remember our long catalogue of transgressions, and consider him as suffering under the load of our guilt. Here is laid a firm foundation for the trembling sinner to rest his soul upon. We are the purchase of his blood, and the monuments of his grace; for this he continually pleads and prevails, destroying the works of the devil.

View All Discussusion for Isaiah Chapter 53... 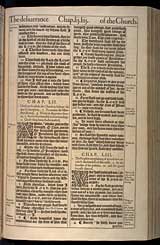