1 Then verily the first Couenant had also ordinances of diuine Seruice, and a worldly Sanctuary.

2 For there was a Tabernacle made, the first, wherein was the Candlesticke, and the Table, and the Shewbread, which is called the Sanctuarie.

3 And after the second vaile, the Tabernacle which is called þe Holiest of all:

4 Which had the golden Censor, and the Arke of the Couenant ouerlayed round about with gold, wherein was the Golden pot that had Manna, and Aarons rod that budded, and the Tables of the Couenant.

5 And ouer it the Cherubims of glory shadowing the Mercyseat; of which we cannot now speake particularly.

6 Now when these things were thus ordained, the Priestes went alwayes into the first Tabernacle, accomplishing the seruice of God.

7 But into the second went the high Priest alone once euery yeere, not without blood, which he offered for himselfe, and for the errors of the people.

8 The holy Ghost this signifying, that the way into the Holiest of all, was not yet made manifest, while as the first Tabernacle was yet standing:

9 Which was a figure for the time then present, in which were offred both gifts and sacrifices, that could not make him that did the seruice perfect, as pertayning to the conscience,

10 Which stood onely in meates and drinkes, and diuers washings, and carnall ordinances imposed on them vntill the time of reformation.

11 But Christ being come an high Priest of good things to come, by a greater and more perfect Tabernacle, not made with hands, that is to say, not of this building:

12 Neither by the blood of Goats and Calues: but by his owne blood hee entred in once into the Holy place, hauing obtained eternall redemption for vs.

13 For if the blood of Bulls, and of goats, and the ashes of an heifer sprinkling the vncleane, sanctifieth to the purifying of the flesh:

14 How much more shall the blood of Christ, who through the eternal Spirit, offered himselfe without spot to God, purge your conscience from dead workes, to serue the liuing God?

15 And for this cause hee is the Mediatour of the New Testament, that by meanes of death, for the redemption of the transgressions that were vnder the first Testament, they which are called, might receiue the promise of eternall inheritance.

16 For where a Testament is, there must also of necessitie bee the death of the Testatour.

17 For a Testament is of force after men are dead: otherwise it is of no strength at all whilest the Testatour liueth.

18 Whereupon, neither the first Testament was dedicated without blood.

19 For when Moses had spoken euery precept to all the people according to the Law, he tooke the blood of Calues and of Goates, with water and scarlet wooll, and hysope, and sprinckled both the booke and all the people,

20 Saying, This is the blood of the Testament which God hath enioyned vnto you.

21 Moreouer, hee sprinkled with blood both the Tabernacle, and all the vessels of the Ministery.

22 And almost all things are by the Law purged with blood: and without shedding of blood is no remission.

23 It was therefore necessary that the patterns of things in the heauens should bee purified with these, but the heauenly things themselues with better sacrifices then these.

24 For Christ is not entred into the Holy places made with handes, which are the figures of the true, but into heauen it selfe, now to appeare in the presence of God for vs.

25 Nor yet that he should offer himselfe often, as the high Priest entreth into the Holy place, euery yeere with blood of others:

26 For then must hee often haue suffered since the foundation of the world: but now once in the end of the world, hath he appeared to put away sinne by the sacrifice of himselfe.

27 And as it is appointed vnto men once to die, but after this the Iudgement:

28 So Christ was once offered to beare the sinnes of many, & vnto them that looke for him shall hee appeare the second time without sinne, vnto saluation.

The Jewish tabernacle and its utensils. (1-5) Their use and meaning. (6-10) These fulfilled in Christ. (11-22) The necessity, superior dignity, and power of his priesthood and sacrifice. (23-28)1-5 The apostle shows to the Hebrews the typical reference of their ceremonies to Christ. The tabernacle was a movable temple, shadowing forth the unsettled state of the church upon earth, and the human nature of the Lord Jesus Christ, in whom the fulness of the Godhead dwelt bodily. The typical meaning of these things has been shown in former remarks, and the ordinances and articles of the Mosaic covenant point out Christ as our Light, and as the Bread of life to our souls; and remind us of his Divine Person, his holy priesthood, perfect righteousness, and all-prevailing intercession. Thus was the Lord Jesus Christ, all and in all, from the beginning. And as interpreted by the gospel, these things are a glorious representation of the wisdom of God, and confirm faith in Him who was prefigured by them.

6-10 The apostle goes on to speak of the Old Testament services. Christ, having undertaken to be our High Priest, could not enter into heaven till he had shed his blood for us; and none of us can enter, either into God's gracious presence here, or his glorious presence hereafter, but by the blood of Jesus. Sins are errors, great errors, both in judgment and practice; and who can understand all his errors? They leave guilt upon the conscience, not to be washed away but by the blood of Christ. We must plead this blood on earth, while he is pleading it for us in heaven. A few believers, under the Divine teaching, saw something of the way of access to God, of communion with him, and of admission into heaven through the promised Redeemer, but the Israelites in general looked no further than the outward forms. These could not take away the defilement or dominion of sin. They could neither discharge the debts, nor resolve the doubts, of him who did the service. Gospel times are, and should be, times of reformation, of clearer light as to all things needful to be known, and of greater love, causing us to bear ill-will to none, but good-will to all. We have greater freedom, both of spirit and speech, in the gospel, and greater obligations to a more holy living.

11-14 All good things past, present, and to come, were and are founded upon the priestly office of Christ, and come to us from thence. Our High Priest entered into heaven once for all, and has obtained eternal redemption. The Holy Ghost further signified and showed that the Old Testament sacrifices only freed the outward man from ceremonial uncleanness, and fitted him for some outward privileges. What gave such power to the blood of Christ? It was Christ's offering himself without any sinful stain in his nature or life. This cleanses the most guilty conscience from dead, or deadly, works to serve the living God; from sinful works, such as pollute the soul, as dead bodies did the persons of the Jews who touched them; while the grace that seals pardon, new-creates the polluted soul. Nothing more destroys the faith of the gospel, than by any means to weaken the direct power of the blood of Christ. The depth of the mystery of the sacrifice of Christ, we cannot dive into, the height we cannot comprehend. We cannot search out the greatness of it, or the wisdom, the love, the grace that is in it. But in considering the sacrifice of Christ, faith finds life, food, and refreshment.

15-22 The solemn transactions between God and man, are sometimes called a covenant, here a testament, which is a willing deed of a person, bestowing legacies on such persons as are described, and it only takes effect upon his death. Thus Christ died, not only to obtain the blessings of salvation for us, but to give power to the disposal of them. All, by sin, were become guilty before God, had forfeited every thing that is good; but God, willing to show the greatness of his mercy, proclaimed a covenant of grace. Nothing could be clean to a sinner, not even his religious duties; except as his guilt was done away by the death of a sacrifice, of value sufficient for that end, and unless he continually depended upon it. May we ascribe all real good works to the same all-procuring cause, and offer our spiritual sacrifices as sprinkled with Christ's blood, and so purified from their defilement.

23-28 It is evident that the sacrifices of Christ are infinitely better than those of the law, which could neither procure pardon for sin, nor impart power against it. Sin would still have been upon us, and have had dominion over us; but Jesus Christ, by one sacrifice, has destroyed the works of the devil, that believers may be made righteous, holy, and happy. As no wisdom, learning, virtue, wealth, or power, can keep one of the human race from death, so nothing can deliver a sinner from being condemned at the day of judgment, except the atoning sacrifice of Christ; nor will one be saved from eternal punishment who despises or neglects this great salvation. The believer knows that his Redeemer liveth, and that he shall see him. Here is the faith and patience of the church, of all sincere believers. Hence is their continual prayer as the fruit and expression of their faith, Even so come, Lord Jesus.

View All Discussusion for Hebrews Chapter 9... 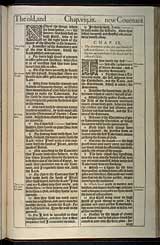