1 For this Melchisedec king of Salem, Priest of the most high God, who met Abraham returning from the slaughter of the Kings, and blessed him:

2 To whom also Abraham gaue a tenth part of all: first being by interpretation king of righteousnesse, and after that also king of Salem, which is, king of peace.

3 Without father, without mother, without descent, hauing neither beginning of dayes nor end of life: but made like vnto the Sonne of God, abideth a Priest continually.

4 Now consider how great this man was, vnto whō euen the patriarch Abraham gaue the tenth of the spoiles.

5 And verily they that are of the sonnes of Leui, who receiue the office of the Priesthood, haue a commandement to take Tithes of the people according to the Law, that is of their brethren, though they come out of the loines of Abraham:

6 But he whose descent is not counted from them, receiued tithes of Abraham, and blessed him that had the promises.

7 And without all contradiction, the lesse is blessed of the better.

8 And here men that die receiue tithes: but there hee receiueth them, of whom it is witnessed that he liueth.

9 And as I may so say, Leui also who receiueth tithes, payed tithes in Abraham.

10 For hee was yet in the loynes of his Father when Melchisedec met him.

11 If therefore perfection were by the Leuiticall Priesthood (for vnder it the people receiued the Law) what further neede was there, that another Priest should rise after the order of Melchisedec, and not bee called after the order of Aaron?

12 For the Priesthood being chaunged, there is made of necessitie a change also of the Law.

13 For hee of whom these things are spoken, pertaineth to another tribe, of which no man gaue attendance at the Altar.

14 For it is euident that our Lorde sprang out of Iuda, of which tribe Moses spake nothing cōcerning Priesthood.

15 And it is yet farre more euident: for that after the similitude of Melchisedec there ariseth another Priest,

16 Who is made not after the Law of a carnall commandement, but after the power of an endles life.

17 For hee testifieth; Thou art a Priest for euer, after the order of Melchisedec.

18 For there is verily a disanulling of the commandement going before, for the weakenesse and vnprofitablenesse thereof.

19 For the Law made nothing perfect, but the bringing in of a better hope did: by the which wee draw nigh vnto God.

20 And in as much as not without an othe he was made Priest,

21 (For those Priests were made without an oath: but this with an oath, by him þt said vnto him, The Lord sware and wil not repent, thou art a Priest for euer after the order of Melchisedec)

22 By so much was Iesus made a suertie of a better Testament.

23 And they truely were many Priests, because they were not suffered to continue by reason of death.

24 But this man because hee continueth euer, hath an vnchangeable Priesthood.

25 Wherefore he is able also to saue them to the vttermost, that come vnto God by him, seeing hee euer liueth to make intercession for them.

26 For such an high Priest became vs, who is holy, harmelesse, vndefiled, separate from sinners, and made higher then the heauens.

27 Who needeth not daily, as those high Priests, to offer vp sacrifice, first for his owne sins and then for the peoples: for this he did once, when he offered vp himselfe.

28 For the Law maketh men high Priests which haue infirmitie, but the word of the othe which was since the Law, maketh the Sonne, who is consecrated for euermore.

A comparison between the priesthood of Melchizedec and that of Christ. (1-3) The excellence of Christ's priesthood above the Levitical priesthood is shown. (4-10) This is applied to Christ. (11-25) The faith and hope of the church encouraged from this. (26-28)1-3 Melchizedec met Abraham when returning from the rescue of Lot. His name, "King of Righteousness," doubtless suitable to his character, marked him as a type of the Messiah and his kingdom. The name of his city signified "Peace;" and as king of peace he typified Christ, the Prince of Peace, the great Reconciler of God and man. Nothing is recorded as to the beginning or end of his life; thus he typically resembled the Son of God, whose existence is from everlasting to everlasting, who had no one that was before him, and will have no one come after him, in his priesthood. Every part of Scripture honours the great King of Righteousness and Peace, our glorious High Priest and Saviour; and the more we examine it, the more we shall be convinced, that the testimony of Jesus is the spirit of prophecy.

4-10 That High Priest who should afterward appear, of whom Melchizedec was a type, must be much superior to the Levitical priests. Observe Abraham's great dignity and happiness; that he had the promises. That man is rich and happy indeed, who has the promises, both of the life that now is, and of that which is to come. This honour have all those who receive the Lord Jesus. Let us go forth in our spiritual conflicts, trusting in his word and strength, ascribing our victories to his grace, and desiring to be met and blessed by him in all our ways.

11-25 The priesthood and law by which perfection could not come, are done away; a Priest is risen, and a dispensation now set up, by which true believers may be made perfect. That there is such a change is plain. The law which made the Levitical priesthood, showed that the priests were frail, dying creatures, not able to save their own lives, much less could they save the souls of those who came to them. But the High Priest of our profession holds his office by the power of endless life in himself; not only to keep himself alive, but to give spiritual and eternal life to all who rely upon his sacrifice and intercession. The better covenant, of which Jesus was the Surety, is not here contrasted with the covenant of works, by which every transgressor is shut up under the curse. It is distinguished from the Sinai covenant with Israel, and the legal dispensation under which the church so long remained. The better covenant brought the church and every believer into clearer light, more perfect liberty, and more abundant privileges. In the order of Aaron there was a multitude of priests, of high priests one after another; but in the priesthood of Christ there is only one and the same. This is the believer's safety and happiness, that this everlasting High Priest is able to save to the uttermost, in all times, in all cases. Surely then it becomes us to desire a spirituality and holiness, as much beyond those of the Old Testament believers, as our advantages exceed theirs.

26-28 Observe the description of the personal holiness of Christ. He is free from all habits or principles of sin, not having the least disposition to it in his nature. No sin dwells in him, not the least sinful inclination, though such dwells in the best of Christians. He is harmless, free from all actual transgression; he did no violence, nor was there any deceit in his mouth. He is undefiled. It is hard to keep ourselves pure, so as not to partake the guilt of other men's sins. But none need be dismayed who come to God in the name of his beloved Son. Let them be assured that he will deliver them in the time of trial and suffering, in the time of prosperity, in the hour of death, and in the day of judgment.

View All Discussusion for Hebrews Chapter 7... 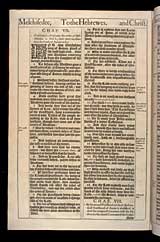