1 Therefore leauing the principles of the doctrine of Christ, let vs goe on vnto perfection, not laying againe the foundation of repentance from dead workes, and of faith towards God,

2 Of the doctrine of Baptismes, and of laying on of hands, and of resurrection of the dead, and of eternall iudgement.

3 And this will we doe, if God permit.

4 For it is impossible for those who were once inlightned, and haue tasted of the heauenly gift, and were made partakers of the holy Ghost,

5 And haue tasted the good word of God, and the powers of the world to come;

6 If they shall fall away, to renue them againe vnto repentance: seeing they crucifie to themselues the Sonne of God afresh, and put him to an open shame.

7 For the earth which drinketh in the raine that commeth oft vpon it, and bringeth forth herbes meet for them by whome it is dressed, receiueth blessing from God.

8 But that which beareth thornes and briers, is reiected, and is nigh vnto cursing, whose end is to be burned.

9 But beloued, wee are perswaded better things of you, and things that accompany saluation, though we thus speake.

10 For God is not vnrighteous, to forget your worke and labour of loue, which yee haue shewed toward his Name, in that yee haue ministred to the Saints, and doe minister.

11 And wee desire, that euery one of you doe shewe the same diligence, to the full assurance of hope vnto the ende:

12 That yee be not slothfull, but followers of them, who through faith and patience inherite the promises.

13 For when God made promise to Abraham, because hee could sweare by no greater, he sware by himselfe,

14 Saying, Surely, blessing I will blesse thee, and multiplying I wil multiply thee.

15 And so after he had patiently indured, he obtained the promise.

16 For men verily sweare by the greater, and an oath for confirmation is to them an end of all strife.

17 Wherein God willing more abundantly to shewe vnto the heyres of promise the immutabilitie of his counsell, confirmed it by an oath:

18 That by two immutable things, in which it was impossible for God to lye, wee might haue a strong consolation, who haue fled for refuge to lay hold vpon the hope set before vs.

19 Which hope we haue as an anker of the soule both sure and stedfast, and which entreth into that within the vaile,

20 Whither the forerunner is for vs entrrd; euen Iesus, made an high Priest for euer after the order of Melchisedec.

The Hebrews are urged to go forward in the doctrine of Christ, and the consequences of apostacy, or turning back, are described. (1-8) The apostle expresses satisfaction, as to the most of them. (9,10) And encourages them to persevere in faith and holiness. (11-20)1-8 Every part of the truth and will of God should be set before all who profess the gospel, and be urged on their hearts and consciences. We should not be always speaking about outward things; these have their places and use, but often take up too much attention and time, which might be better employed. The humbled sinner who pleads guilty, and cries for mercy, can have no ground from this passage to be discouraged, whatever his conscience may accuse him of. Nor does it prove that any one who is made a new creature in Christ, ever becomes a final apostate from him. The apostle is not speaking of the falling away of mere professors, never convinced or influenced by the gospel. Such have nothing to fall away from, but an empty name, or hypocritical profession. Neither is he speaking of partial declinings or backslidings. Nor are such sins meant, as Christians fall into through the strength of temptations, or the power of some worldly or fleshly lust. But the falling away here mentioned, is an open and avowed renouncing of Christ, from enmity of heart against him, his cause, and people, by men approving in their minds the deeds of his murderers, and all this after they have received the knowledge of the truth, and tasted some of its comforts. Of these it is said, that it is impossible to renew them again unto repentance. Not because the blood of Christ is not sufficient to obtain pardon for this sin; but this sin, in its very nature, is opposite to repentance and every thing that leads to it. If those who through mistaken views of this passage, as well as of their own case, fear that there is no mercy for them, would attend to the account given of the nature of this sin, that it is a total and a willing renouncing of Christ, and his cause, and joining with his enemies, it would relieve them from wrong fears. We should ourselves beware, and caution others, of every approach near to a gulf so awful as apostacy; yet in doing this we should keep close to the word of God, and be careful not to wound and terrify the weak, or discourage the fallen and penitent. Believers not only taste of the word of God, but they drink it in. And this fruitful field or garden receives the blessing. But the merely nominal Christian, continuing unfruitful under the means of grace, or producing nothing but deceit and selfishness, was near the awful state above described; and everlasting misery was the end reserved for him. Let us watch with humble caution and prayer as to ourselves.

9,10 There are things that are never separated from salvation; things that show the person to be in a state of salvation, and which will end in eternal salvation. And the things that accompany salvation, are better things than ever any dissembler or apostate enjoyed. The works of love, done for the glory of Christ, or done to his saints for Christ's sake, from time to time, as God gives occasion, are evident marks of a man's salvation; and more sure tokens of saving grace given, than the enlightenings and tastings spoken of before. No love is to be reckoned as love, but working love; and no works are right works, which flow not from love to Christ.

11-20 The hope here meant, is a sure looking for good things promised, through those promises, with love, desire, and valuing of them. Hope has its degrees, as faith also. The promise of blessedness God has made to believers, is from God's eternal purpose, settled between the eternal Father, Son, and Spirit. These promises of God may safely be depended upon; for here we have two things which cannot change, the counsel and the oath of God, in which it is not possible for God to lie; it would be contrary to his nature as well as to his will. And as He cannot lie; the destruction of the unbeliever, and the salvation of the believer, are alike certain. Here observe, those to whom God has given full security of happiness, have a title to the promises by inheritance. The consolations of God are strong enough to support his people under their heaviest trials. Here is a refuge for all sinners who flee to the mercy of God, through the redemption of Christ, according to the covenant of grace, laying aside all other confidences. We are in this world as a ship at sea, tossed up and down, and in danger of being cast away. We need an anchor to keep us sure and steady. Gospel hope is our anchor in the storms of this world. It is sure and stedfast, or it could not keep us so. The free grace of God, the merits and mediation of Christ, and the powerful influences of his Spirit, are the grounds of this hope, and so it is a stedfast hope. Christ is the object and ground of the believer's hope. Let us therefore set our affections on things above, and wait patiently for his appearance, when we shall certainly appear with him in glory.

View All Discussusion for Hebrews Chapter 6... 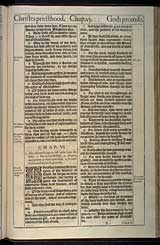