1 Wherefore, seeing wee also are compassed about with so great a cloude of witnesses, let vs lay aside euery weight, & the sinne which doth so easily beset vs, and let vs runne with patience vnto the race that is set before vs,

2 Looking vnto Iesus the Authour and finisher of our faith, who for the ioy that was set before him, endured the crosse, despising the shame, and is set down at the right hand of the throne of God.

3 For consider him that indured such contradiction of sinners against himselfe, lest ye be wearied and faint in your mindes.

4 Yee haue not yet resisted vnto blood, striuing against sinne.

5 And ye haue forgotten the exhortation which speaketh vnto you as vnto children, My sonne, despise not thou the chastening of the Lord, nor faint when thou art rebuked of him.

6 For whome the Lord loueth hee chasteneth, and scourgeth euery sonne whom he receiueth.

7 If yee endure chastening, God dealeth with you as with sonnes: for what sonne is he whom the father chasteneth not?

8 But if ye be without chastisement, whereof all are partakers, then are ye bastards, and not sonnes.

9 Furthermore, wee haue had fathers of our flesh, which corrected vs, and we gaue them reuerence: shall we not much rather bee in subiection vnto the Father of Spirits, and liue?

10 For they verily for a fewe dayes chastened vs after their owne pleasure, but hee for our profit, that we might bee partakers of his holinesse.

11 Now no chastening for the present seemeth to be ioyous, but grieuous: neuerthelesse, afterward it yeeldeth the peaceable fruite of righteousnesse, vnto them which are exercised thereby.

12 Wherefore lift vp the handes which hang downe, and the feeble knees.

13 And make straight paths for your feete, lest that which is lame bee turned out of the way, but let it rather bee healed.

14 Followe peace with all men, and holinesse, without which no man shall see the Lord:

15 Looking diligently, lest any man faile of the grace of God, lest any roote of bitternesse springing vp, trouble you, and thereby many be defiled:

16 Lest there bee any fornicatour, or profane person, as Esau, who for one morsell of meat sold his birthright.

17 For yee know how that afterward when hee would haue inherited the blessing, hee was reiected: for hee found no place of repentance, though he sought it carefully with teares.

18 For yee are not come vnto the mount that might be touched, and that burned with fire, nor vnto blacknesse, and darknes, and tempest,

19 And the sound of a trumpet, and the voyce of wordes, which voyce they that heard, entreated that the word should not bee spoken to them any more.

20 For they could not indure that which was commaunded: And if so much as a beast touch the Mountaine, it shall be stoned, or thrust thorow with a dart.

21 And so terrible was the sight, that Moses sayde, I exceedingly feare, and quake.

22 But ye are come vnto mount Sion, and vnto the citie of the liuing God the heauenly Ierusalem, and to an innumerable company of Angels:

23 To the generall assembly, and Church of the first borne which are written in heauen, and to God the Iudge of all, and to the spirits of iust men made perfect:

24 And to Iesus the mediatour of the new Couenant, and to the blood of sprinckling, that speaketh better things then that of Abel.

26 Whose voice then shooke the earth, but now he hath promised, saying, Yet once more I shake not the earth onely, but also heauen.

29 For our God is a consuming fire.

An exhortation to be constant and persevere, The example of Christ is set forth, and the gracious design of God in all the sufferings believers endured. (1-11) Peace and holiness are recommended, with cautions against despising spiritual blessings. (12-17) The New Testament dispensation shown to be much more excellent than the Old. (18-29)1-11 The persevering obedience of faith in Christ, was the race set before the Hebrews, wherein they must either win the crown of glory, or have everlasting misery for their portion; and it is set before us. By the sin that does so easily beset us, understand that sin to which we are most prone, or to which we are most exposed, from habit, age, or circumstances. This is a most important exhortation; for while a man's darling sin, be it what it will, remains unsubdued, it will hinder him from running the Christian race, as it takes from him every motive for running, and gives power to every discouragement. When weary and faint in their minds, let them recollect that the holy Jesus suffered, to save them from eternal misery. By stedfastly looking to Jesus, their thoughts would strengthen holy affections, and keep under their carnal desires. Let us then frequently consider him. What are our little trials to his agonies, or even to our deserts? What are they to the sufferings of many others? There is a proneness in believers to grow weary, and to faint under trials and afflictions; this is from the imperfection of grace and the remains of corruption. Christians should not faint under their trials. Though their enemies and persecutors may be instruments to inflict sufferings, yet they are Divine chastisements; their heavenly Father has his hand in all, and his wise end to answer by all. They must not make light of afflictions, and be without feeling under them, for they are the hand and rod of God, and are his rebukes for sin. They must not despond and sink under trials, nor fret and repine, but bear up with faith and patience. God may let others alone in their sins, but he will correct sin in his own children. In this he acts as becomes a father. Our earthly parents sometimes may chasten us, to gratify their passion, rather than to reform our manners. But the Father of our souls never willingly grieves nor afflicts his children. It is always for our profit. Our whole life here is a state of childhood, and imperfect as to spiritual things; therefore we must submit to the discipline of such a state. When we come to a perfect state, we shall be fully reconciled to all God's chastisement of us now. God's correction is not condemnation; the chastening may be borne with patience, and greatly promote holiness. Let us then learn to consider the afflictions brought on us by the malice of men, as corrections sent by our wise and gracious Father, for our spiritual good.

12-17 A burden of affliction is apt to make the Christian's hands hang down, and his knees grow feeble, to dispirit him and discourage him; but against this he must strive, that he may better run his spiritual race and course. Faith and patience enable believers to follow peace and holiness, as a man follows his calling constantly, diligently, and with pleasure. Peace with men, of all sects and parties, will be favourable to our pursuit of holiness. But peace and holiness go together; there can be not right peace without holiness. Where persons fail of having the true grace of God, corruption will prevail and break forth; beware lest any unmortified lust in the heart, which seems to be dead, should spring up, to trouble and disturb the whole body. Falling away from Christ is the fruit of preferring the delights of the flesh, to the blessing of God, and the heavenly inheritance, as Esau did. But sinners will not always have such mean thoughts of the Divine blessing and inheritance as they now have. It agrees with the profane man's disposition, to desire the blessing, yet to despise the means whereby the blessing is to be gained. But God will neither sever the means from the blessing, nor join the blessing with the satisfying of man's lusts. God's mercy and blessing were never sought carefully and not obtained.

18-29 Mount Sinai, on which the Jewish church state was formed, was a mount such as might be touched, though forbidden to be so, a place that could be felt; so the Mosaic dispensation was much in outward and earthly things. The gospel state is kind and condescending, suited to our weak frame. Under the gospel all may come with boldness to God's presence. But the most holy must despair, if judged by the holy law given from Sinai, without a Saviour. The gospel church is called Mount Zion; there believers have clearer views of heaven, and more heavenly tempers of soul. All the children of God are heirs, and every one has the privileges of the first-born. Let a soul be supposed to join that glorious assembly and church above, that is yet unacquainted with God, still carnally-minded, loving this present world and state of things, looking back to it with a lingering eye, full of pride and guile, filled with lusts; such a soul would seem to have mistaken its way, place, state, and company. It would be uneasy to itself and all about it. Christ is the Mediator of this new covenant, between God and man, to bring them together in this covenant; to keep them together; to plead with God for us, and to plead with us for God; and at length to bring God and his people together in heaven. This covenant is made firm by the blood of Christ sprinkled upon our consciences, as the blood of the sacrifice was sprinkled upon the altar and the victim. This blood of Christ speaks in behalf of sinners; it pleads not for vengeance, but for mercy. See then that you refuse not his gracious call and offered salvation. See that you do not refuse Him who speaketh from heaven, with infinite tenderness and love; for how can those escape, who turn from God in unbelief or apostacy, while he so graciously beseeches them to be reconciled, and to receive his everlasting favour! God's dealing with men under the gospel, in a way of grace, assures us, that he will deal with the despisers of the gospel, in a way of judgment. We cannot worship God acceptably, unless we worship him with reverence and godly fear. Only the grace of God enables us to worship God aright. God is the same just and righteous God under the gospel as under the law. The inheritance of believers is secured to them; and all things pertaining to salvation are freely given in answer to prayer. Let us seek for grace, that we may serve God with reverence and godly fear.

View All Discussusion for Hebrews Chapter 12... 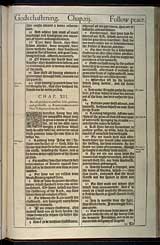