1 In the second yeere of Darius the king, in the sixt moneth, in the first day of the moneth came the worde of the Lord by Haggai the Prophet vnto Zerubbabel the sonne of Shealtiel, gouernour of Iudah, and to Iosuah the sonne of Iosedech the high priest, saying;

2 Thus speaketh the Lord of hostes, saying; This people say, The time is not come, the time that the Lords house should be built.

3 Then came the word of the Lord by Haggai the prophet, saying;

4 Is it time for you, O yee, to dwell in your sieled houses, and this house lie waste?

6 Yee haue sowen much and bring in litle: ye eate, but ye haue not inough: yee drinke, but yee are not filled with drinke: yee cloth you, but there is none warme: and hee that earneth wages, earneth wages to put it into a bag with holes.

7 ¶ Thus saith the Lord of hostes, Consider your wayes.

8 Goe vp to the mountaine, and bring wood, and build the house; and I will take pleasure in it, and I will be glorified, saith the Lord.

9 Ye looked for much, and loe it came to litle: and when yee brought it home, I did blow vpon it: Why, saith the Lord of hostes? because of mine house that is waste, and yee runne euery man vnto his owne house.

10 Therefore the heauen ouer you is stayed from dew, and the earth is staied from her fruite.

15 In the foure and twentieth day of the sixt moneth, in the second yeere of Darius the King.

After the return from captivity, Haggai was sent to encourage the people to rebuild the temple, and to reprove their neglect. To encourage their undertaking, the people are assured that the glory of the second temple shall far exceed that of the first, by the appearing therein of Christ, the Desire of all nations.Haggai reproves the Jews for neglecting the temple. (1-11) He promises God's assistance to them. (12-15)1-11 Observe the sin of the Jews, after their return from captivity in Babylon. Those employed for God may be driven from their work by a storm, yet they must go back to it. They did not say that they would not build a temple, but, Not yet. Thus men do not say they will never repent and reform, and be religious, but, Not yet. And so the great business we were sent into the world to do, is not done. There is a proneness in us to think wrongly of discouragements in our duty, as if they were a discharge from our duty, when they are only for the trial of our courage and faith. They neglected the building of God's house, that they might have more time and money for worldly affairs. That the punishment might answer to the sin, the poverty they thought to prevent by not building the temple, God brought upon them for not building it. Many good works have been intended, but not done, because men supposed the proper time was not come. Thus believers let slip opportunities of usefulness, and sinners delay the concerns of their souls, till too late. If we labour only for the meat that perishes, as the Jews here, we are in danger of losing our labour; but we are sure it shall not be in vain in the Lord, if we labour for the meat which lasts to eternal life. If we would have the comfort and continuance of temporal enjoyments, we must have God as our Friend. See also #Lu 12:33|. When God crosses our temporal affairs, and we meet with trouble and disappointment, we shall find the cause is, that the work we have to do for God and our own souls is left undone, and we seek our own things more than the things of Christ. How many, who plead that they cannot afford to give to pious or charitable designs, often lavish ten times as much in needless expenses on their houses and themselves! But those are strangers to their own interests, who are full of care to adorn and enrich their own houses, while God's temple in their hearts lies waste. It is the great concern of every one, to apply to the necessary duty of self-examination and communion with our own hearts concerning our spiritual state. Sin is what we must answer for; duty is what we must do. But many are quick-sighted to pry into other people's ways, who are careless of their own. If any duty has been neglected, that is no reason why it should still be so. Whatever God will take pleasure in when done, we ought to take pleasure in doing. Let those who have put off their return to God, return with all their heart, while there is time.

12-15 The people returned to God in the way of duty. In attending to God's ministers, we must have respect to him that sent them. The word of the Lord has success, when by his grace he stirs up our spirits to comply with it. It is in the day of Divine power we are made willing. When God has work to be done, he will either find or make men fit to do it. Every one helped, as his ability was; and this they did with a regard to the Lord as their God. Those who have lost time, need to redeem time; and the longer we have loitered in folly, the more haste we should make. God met them in a way of mercy. Those who work for him, have him with them; and if he be for us, who can be against us? This should stir us up to be diligent.

View All Discussusion for Haggai Chapter 1... 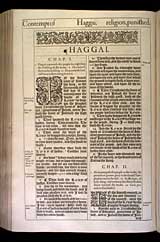