1 And Ioseph fell vpon his fathers face, and wept vpon him, and kissed him.

3 And fortie dayes were fulfilled for him, (for so are fulfilled the dayes of those which are imbalmed) and the Egyptians mourned for him threescore and ten dayes.

5 My father made me sweare, saying, Loe, I die: in my graue which I haue digged for me, in the land of Canaan, there shalt thou bury me. Now therfore let me goe vp, I pray thee, and bury my father, and I will come againe.

6 And Pharaoh said, Goe vp, and bury thy father, according as he made thee sweare.

7 ¶ And Ioseph went vp to bury his father: and with him went vp all the seruants of Pharaoh, the elders of his house, and all the elders of the land of Egypt,

8 And all the house of Ioseph, and his brethren, and his fathers house: onely their litle ones, and their flockes, and their heards, they left in the land of Goshen.

9 And there went vp with him both charets and horsemen: and it was a very great company.

10 And they came to the threshing floore of Atad, which is beyond Iordan, and there they mourned with a great and very sore lamentation: and he made a mourning for his father seuen dayes.

11 And when the inhabitants of the land, the Canaanites sawe the mourning in the floore of Atad, they saide, This is a grieuous mourning to the Egyptians: wherfore the name of it was called, Abel Mizraim, which is beyond Iordan.

12 And his sonnes did vnto him according as he commanded them.

13 For his sonnes caried him into the land of Canaan, and buried him in the caue of the field of Machpelah, which Abraham bought with the field for a possession of a burying place, of Ephron the Hittite, before Mamre.

14 ¶ And Ioseph returned into Egypt, he and his brethren, and all that went vp with him, to bury his father, after he had buried his father.

15 ¶ And when Iosephs brethren saw that their father was dead, they said, Ioseph will peraduenture hate vs, and will certainely requite vs all the euill which we did vnto him.

16 And they sent a messenger vnto Ioseph, saying, Thy father did command before he died, saying,

17 So shall ye say vnto Ioseph, Forgiue, I pray thee now, the trespasse of thy brethren, and their sinne: for they did vnto thee euill: And now wee pray thee, forgiue the trespasse of the seruants of the God of thy father. And Ioseph wept, when they spake vnto him.

18 And his brethren also went and fell downe before his face, and they said, Behold, we be thy seruants.

19 And Ioseph saide vnto them, Feare not: for am I in the place of God?

20 But as for you, yee thought euill against me, but God meant it vnto good, to bring to passe, as it is this day, to saue much people aliue.

21 Now therefore feare yee not: I will nourish you, and your litle ones. And hee comforted them, and spake kindly vnto them.

22 ¶ And Ioseph dwelt in Egypt, he, and his fathers house: and Ioseph liued an hundred and ten yeeres.

23 And Ioseph sawe Ephraims children, of the third generation: the children also of Machir, the sonne of Manasseh were brought vp vpon Iosephs knees.

24 And Ioseph saide vnto his brethren, I die: and God will surely visit you, and bring you out of this land, vnto the land which hee sware to Abraham, to Isaac, and to Iacob.

25 And Ioseph tooke an othe of the children of Israel, saying, God will surely visite you, and ye shal carie vp my bones from hence.

26 So Ioseph died, being an hundred and ten yeeres old: and they imbalmed him, and he was put in a coffin, in Egypt.

The mourning for Jacob. (1-6) His funeral. (7-14) Joseph's brethren crave his pardon, He comforts them. (15-21) Joseph's direction concerning his bones, His death. (22-26)1-6 Though pious relatives and friends have lived to a good old age, and we are confident they are gone to glory, yet we may regret our own loss, and pay respect to their memory by lamenting them. Grace does not destroy, but it purifies, moderates, and regulates natural affection. The departed soul is out of the reach of any tokens of our affection; but it is proper to show respect to the body, of which we look for a glorious and joyful resurrection, whatever may become of its remains in this world. Thus Joseph showed his faith in God, and love to his father. He ordered the body to be embalmed, or wrapped up with spices, to preserve it. See how vile our bodies are, when the soul has forsaken them; they will in a very little time become noisome, and offensive.

7-14 Jacob's body was attended, not only by his own family, but by the great men of Egypt. Now that they were better acquainted with the Hebrews, they began to respect them. Professors of religion should endeavour by wisdom and love to remove the prejudices many have against them. Standers-by took notice of it as a grievous mourning. The death of good men is a loss to any place, and ought to be greatly lamented.

15-21 Various motives might cause the sons of Jacob to continue in Egypt, notwithstanding the prophetic vision Abraham had of their bondage there. Judging of Joseph from the general temper of human nature, they thought he would now avenge himself on those who hated and injured him without cause. Not being able to resist, or to flee away, they attempted to soften him by humbling themselves. They pleaded with him as the servants of Jacob's God. Joseph was much affected at seeing this complete fulfilment of his dreams. He directs them not to fear him, but to fear God; to humble themselves before the Lord, and to seek the Divine forgiveness. He assures them of his own kindness to them. See what an excellent spirit Joseph was of, and learn of him to render good for evil. He comforted them, and, to banish all their fears, he spake kindly to them. Broken spirits must be bound up and encouraged. Those we love and forgive, we must not only do well for, but speak kindly to.

22-26 Joseph having honoured his father, his days were long in the land, which, for the present, God had given him. When he saw his death approaching, he comforted his brethren with the assurance of their return to Canaan in due time. We must comfort others with the same comforts with which we have been comforted of God, and encourage them to rest on the promises which are our support. For a confession of his own faith, and a confirmation of theirs, he charges them to keep his remains unburied till that glorious day, when they should be settled in the land of promise. Thus Joseph, by faith in the doctrine of the resurrection, and the promise of Canaan, gave commandment concerning his bones. This would keep up their expectation of a speedy departure from Egypt, and keep Canaan continually in their minds. This would also attach Joseph's posterity to their brethren. The death, as well as the life of this eminent saint, was truly excellent; both furnish us with strong encouragement to persevere in the service of God. How happy to set our early in the heavenly race, to continue stedfastly, and to finish the course with joy! This Joseph did, this we also may do. Even when the pains of death are upon us, if we have trusted in Him upon whom the patriarchs, prophets, and apostles depended, we need not fear to say, "My flesh and my heart faileth, but God is the strength of my heart, and my portion for ever."

View All Discussusion for Genesis Chapter 50... 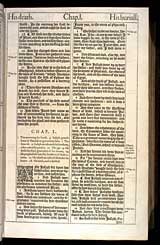