1 And it came to passe after these things, that one told Ioseph, Behold, thy father is sicke: and he tooke with him his two sonnes, Manasseh and Ephraim.

2 And one told Iacob, and said, Behold, thy sonne Ioseph commeth vnto thee: and Israel strengthened himselfe, and sate vpon the bed.

3 And Iacob saide vnto Ioseph, God Almightie appeared vnto mee at Luz in the land of Canaan, and blessed mee,

4 And said vnto me, Behold, I wil make thee fruitfull, and multiplie thee, and I will make of thee a multitude of people, and will giue this land to thy seede after thee, for an euerlasting possession.

5 ¶ And now thy two sonnes, Ephraim and Manasseh, which were borne vnto thee in the land of Egypt, before I came vnto thee into Egypt, are mine: as Reuben and Simeon, they shalbe mine.

6 And thy issue which thou begettest after them, shall be thine, and shall be called after the name of their brethren in their inheritance.

7 And as for me, when I came from Padan, Rachel died by me in the land of Canaan, in the way, when yet there was but a little way to come vnto Ephrath: and I buried her there in the way of Ephrath, the same is Bethlehem.

8 And Israel behelde Iosephs sonnes, and said, Who are these?

9 And Ioseph said vnto his father, They are my sonnes, whom God hath giuen me in this place: and he said, Bring them, I pray thee, vnto me, and I will blesse them.

10 (Now the eyes of Israel were dimme for age, so that he could not see,) and hee brought them neere vnto him, and he kissed them, and imbraced them.

11 And Israel said vnto Ioseph, I had not thought to see thy face: and loe, God hath shewed me also thy seed.

12 And Ioseph brought them out from betweene his knees, and hee bowed himselfe with his face to the earth.

14 And Israel stretched out his right hand, and layd it vpon Ephraims head who was the yonger; and his left hand vpon Manassehs head, guiding his hands wittingly: for Manasseh was the first borne.

15 ¶ And he blessed Ioseph and said, God before whom my fathers Abraham and Isaac did walke, the God which fedde mee all my life long vnto this day,

16 The Angel which redeemed mee from all euill, blesse the laddes, and let my name be named on them, and the name of my fathers Abraham and Isaac, and let them grow into a multitude in the midst of the earth.

17 And when Ioseph saw that his father laide his right hand vpon the head of Ephraim, it displeased him: and he held vp his fathers hand, to remoue it from Ephraims head, vnto Manassehs head.

18 And Ioseph saide vnto his father, Not so my father: for this is the first borne; put thy right hand vpon his head.

20 And he blessed them that day, saying, In thee shall Israel blesse, saying, God make thee as Ephraim, and as Manasseh: and he set Ephraim before Manasseh.

21 And Israel saide vnto Ioseph, Behold, I die: but God shall be with you, and bring you againe vnto the land of your fathers.

22 Moreouer I haue giuen to thee one portion aboue thy brethren, which I tooke out of the hand of the Amorite with my sword, and with my bow.

Joseph visits his dying father. (1-7) Jacob blesses Joseph's sons. (8-22)1-7 The death-beds of believers, with the prayers and counsels of dying persons, are suited to make serious impressions upon the young, the gay, and the prosperous: we shall do well to take children on such occasions, when it can be done properly. If the Lord please, it is very desirable to bear our dying testimony to his truth, to his faithfulness, and the pleasantness of his ways. And one would wish so to live, as to give energy and weight to our dying exhortations. All true believers are blessed at their death, but all do not depart equally full of spiritual consolations. Jacob adopted Joseph's two sons. Let them not succeed their father, in his power and grandeur in Egypt; but let them succeed in the inheritance of the promise made to Abraham. Thus the aged dying patriarch teaches these young persons to take their lot with the people of God. He appoints each of them to be the head of a tribe. Those are worthy of double honour, who, through God's grace, break through the temptations of worldly wealth and preferment, to embrace religion in disgrace and poverty. Jacob will have Ephraim and Manasseh to know, that it is better to be low, and in the church, than high, and out of it.

8-22 The two good men own God in their comforts. Joseph says, They are my sons whom God has given me. Jacob says, God hath showed me thy seed. Comforts are doubly sweet to us when we see them coming from God's hand. He not only prevents our fears, but exceeds our hopes. Jacob mentions the care the Divine providence had taken of him all his days. A great deal of hardship he had known in his time, but God kept him from the evil of his troubles. Now he was dying, he looked upon himself as redeemed from all sin and sorrow for ever. Christ, the Angel of the covenant, redeems from all evil. Deliverances from misery and dangers, by the Divine power, coming through the ransom of the blood of Christ, in Scripture are often called redemption. In blessing Joseph's sons, Jacob crossed hands. Joseph was willing to support his first-born, and would have removed his father's hands. But Jacob acted neither by mistake, nor from a partial affection to one more than the other; but from a spirit of prophecy, and by the Divine counsel. God, in bestowing blessings upon his people, gives more to some than to others, more gifts, graces, and comforts, and more of the good things of this life. He often gives most to those that are least likely. He chooses the weak things of the world; he raises the poor out of the dust. Grace observes not the order of nature, nor does God prefer those whom we think fittest to be preferred, but as it pleases him. How poor are they who have no riches but those of this world! How miserable is a death-bed to those who have no well-grounded hope of good, but dreadful apprehensions of evil, and nothing but evil for ever!

View All Discussusion for Genesis Chapter 48... 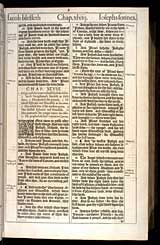