1 And the famine was sore in the land.

2 And it came to passe when they had eaten vp the corne, which they had brought out of Egypt, their father said vnto them, Goe againe, buy vs a little foode.

3 And Iudah spake vnto him, saying, The man did solemnly protest vnto vs, saying, Ye shall not see my face, except your brother be with you.

4 If thou wilt send our brother with vs, we will goe downe and buy thee food.

5 But if thou wilt not send him, we will not goe downe: for the man saide vnto vs, Ye shall not see my face, except your brother be with you.

6 And Israel said, Wherefore dealt ye so ill with me, as to tell the man whether ye had yet a brother?

7 And they said, The man asked vs straitly of our state, and of our kindred, saying, Is your father yet aliue? haue yee another brother? and we tolde him according to the tenour of these words: Could we certainely knowe that he would say, Bring your brother downe?

8 And Iudah said vnto Israel his father, Send the lad with me, and wee will arise and go, that we may liue, and not die, both we, and thou, and also our little ones.

9 I will be surety for him; of my hand shalt thou require him: if I bring him not vnto thee, and set him before thee, then let me beare the blame for euer.

10 For except we had lingred, surely now wee had returned this second time.

11 And their father Israel said vnto them, If it must bee so now, doe this: take of the best fruits in the land in your vessels, and carie downe the man a Present, a litle balme, and a litle honie, spices, and myrrhe, nuts, and almonds.

14 And God Almightie giue you mercie before the man, that he may send away your other brother, and Beniamin: If I be bereaued of my children, I am bereaued.

15 ¶ And the men tooke that Present, and they tooke double money in their hand, and Beniamin, and rose vp, and went downe to Egypt, and stood before Ioseph.

16 And when Ioseph sawe Beniamin with them, hee said to the ruler of his house, Bring these men home, and slay, and make ready: for these men shall dine with me at noone.

17 And the man did as Ioseph hade: and the man brought the men into Iosephs house.

18 And the men were afraid, because they were brought into Iosephs house, and they said, Because of the money that was returned in our sackes at the first time are we brought in, that hee may seeke occasion against vs, and fall vpon vs, and take vs for bondmen, and our asses.

19 And they came neere to the steward of Iosephs house, and they communed with him at the doore of the house,

20 And said, O Sir, we came indeed downe at the first time to buy food.

21 And it came to passe when wee came to the Inne, that wee opened our sackes, and behold, euery mans money was in the mouth of his sacke, our money in ful weight: and we haue brought it againe in our hand.

22 And other money haue wee brought downe in our handes to buy food: we cannot tell who put our money in our sackes.

23 And he said, Peace be to you, feare not: your God, and the God of your father, hath giuen you treasure in your sackes: I had your money. And hee brought Simeon out vnto them.

24 And the man brought the men into Iosephs house, and gaue them water, and they washed their feete, and he gaue their asses prouender.

25 And they made ready the Present against Ioseph came at noone: for they heard that they should eate bread there.

26 ¶ And when Ioseph came home, they brought him the Present which was in their hand, into the house, and bowed themselues to him to the earth.

27 And he asked them of their welfare, and said, Is your father well, the old man of whom ye spake? Is he yet aliue?

28 And they answered, Thy seruant our father is in good health, hee is yet aliue: & they bowed downe their heads, and made obeisance.

29 And he lift vp his eyes, and sawe his brother Beniamin, his mothers sonne, and said, Is this your yonger brother, of whom yee spake vnto mee? and he said, God be gracious vnto thee, my sonne.

30 And Ioseph made haste: for his bowels did yerne vpon his brother: and he sought where to weepe, and hee entred into his chamber, & wept there.

31 And he washed his face, and went out, and refrained himselfe, and saide, Set on bread.

34 And hee tooke and sent measses vnto them from before him: but Beniamins measse was fiue times so much as any of theirs: and they drunke, and were merry with him.

Jacob is persuaded to send Benjamin into Egypt. (1-14) Joseph's reception of his brethren, their fears. (15-25) Joseph makes a feast for his brethren. (26-34)1-14 Jacob urges his sons to go and buy a little food; now, in time of dearth, a little must suffice. Judah urges that Benjamin should go with them. It is not against the honour and duty children owe their parents, humbly to advise them, and when needful, to reason with them. Jacob saw the necessity of the case, and yielded. His prudence and justice appeared in three things. 1. He sent back the money they had found in the sack. Honesty obliges us to restore not only that which comes to us by our own fault, but that which comes to us by the mistakes of others. Though we get it by oversight, if we keep it when the oversight is discovered, it is kept by deceit. 2. He sent as much again as they took the time before; the price of corn might be risen, or they might have to pay a ransom for Simeon. 3. He sent a present of such things as the land afforded, and as were scarce in Egypt, balm, and honey, &c. Providence dispenses not its gifts to all alike. But honey and spice will never make up the want of bread-corn. The famine was sore in Canaan, yet they had balm and myrrh, &c. We may live well enough upon plain food, without dainties; but we cannot live upon dainties without plain food. Let us thank God that what is most needful and useful, generally is most cheap and common. Though men value very highly their gold and silver, and the luxuries which are counted the best fruits of every land, yet in a time of famine they willingly barter them for bread. And how little will earthly good things stand us in stead in the day of wrath! How ready should we be to renounce them all, as loss, for the excellency of the knowledge of Jesus Christ! Our way to prevail with man is by first prevailing with the Lord in fervent prayer. But, Thy will be done, should close every petition for the mercies of this life, or against the afflictions of this life.

15-25 Jacob's sons went down the second time into Egypt to buy corn. If we should ever know what a famine of the word means, let us not think it much to travel as far for spiritual food, as they did for bodily food. Joseph's steward had orders from his master to take them to his house. Even this frightened them. Those that are guilty make the worst of every thing. But the steward encouraged them. It appears, from what he said, that by his good master he was brought to the knowledge of the true God, the God of the Hebrews. Religious servants should take all fit occasions to speak of God and his providence, with reverence and seriousness.

26-34 Observe the great respect Joseph's brethren paid to him. Thus were Joseph's dreams more and more fulfilled. Joseph showed great kindness to them. He treated them nobly; but see here the early distance between Jews and gentiles. In a day of famine, it is enough to be fed; but they were feasted. Their cares and fears were now over, and they ate their bread with joy, reckoning they were upon good terms with the lord of the land. If God accept our works, our present, we have reason to be cheerful. Joseph showed special regard for Benjamin, that he might try whether his brethren would envy him. It must be our rule, to be content with what we have, and not to grieve at what others have. Thus Jesus shows those whom he loves, more and more of their need. He makes them see that he is their only refuge from destruction. He overcomes their unwillingness, and brings them to himself. Then, as he sees good, he gives them some taste of his love, and welcomes them to the provisions of his house, as an earnest of what he further intends for them.

View All Discussusion for Genesis Chapter 43... 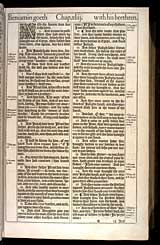