3 And he put them in ward in the house of the captaine of the guard, into the prison, the place where Ioseph was bound.

4 And the captaine of the guard charged Ioseph with them, and he serued them, and they continued a season in warde.

5 ¶ And they dreamed a dreame both of them, each man his dreame in one night, each man according to the interpretation of his dreame, the Butler and the Baker of the king of Egypt, which were bound in the prison.

6 And Ioseph came in vnto them in the morning, and looked vpon them, and behold, they were sad.

7 And he asked Pharaohs officers that were with him in the warde of his lords house, saying, wherefore looke ye so sadly to day?

8 And they said vnto him, we haue dreamed a dreame, and there is no interpreter of it. And Ioseph said vnto them, Doe not interpretations belong to God? tell me them, I pray you.

9 And the chiefe Butler tolde his dreame to Ioseph, and said to him; In my dreame, beholde, a vine was before mee:

10 And in the vine were three branches, and it was as though it budded, and her blossoms shot foorth; and the clusters thereof brought forth ripe grapes.

12 And Ioseph said vnto him, This is the interpretation of it: the three branches are three dayes,

13 Yet within three dayes shall Pharaoh lift vp thine head, and restore thee vnto thy place, and thou shalt deliuer Pharaohs cup into his hand, after the former manner when thou wast his Butler.

14 But thinke on me, when it shall be well with thee, and shew kindenesse, I pray thee, vnto mee, and make mention of me vnto Pharaoh, and bring me out of this house.

15 For indeed I was stollen away out of the land of the Hebrewes: and here also haue I done nothing, that they should put me into the dungeon.

16 When the chiefe Baker saw, that the interpretation was good, he said vnto Ioseph, I also was in my dreame, and behold, I had three white baskets on my head.

17 And in the vppermost basket there was of all maner of bake-meats for Pharaoh, and the birds did eat them out of the basket vpon my head.

18 And Ioseph answered, and said, This is the interpretation thereof: the three baskets are three dayes:

19 Yet within three dayes shall Pharaoh lift vp thy head from off thee, and shall hang thee on a tree, and the birds shall eate thy flesh from off thee.

20 ¶ And it came to passe the third day, which was Pharaohs birth day, that hee made a feast vnto all his seruaunts: and he lifted vp by the head of the chiefe Butler, and of the chiefe Baker among his seruants.

21 And he restored the chiefe Butler vnto his Butlership againe, and hee gaue the cup into Pharaohs hand.

22 But he hanged the chiefe Baker, as Ioseph had interpreted to them.

23 Yet did not the chiefe Butler remember Ioseph, but forgate him.

The chief butler and baker of Pharaoh in prison, Their dreams interpreted by Joseph. (1-19) The ingratitude of the chief butler. (20-23)1-19 It was not so much the prison that made the butler and baker sad, as their dreams. God has more ways than one to sadden the spirits. Joseph had compassion towards them. Let us be concerned for the sadness of our brethren's countenances. It is often a relief to those that are in trouble to be noticed. Also learn to look into the causes of our own sorrow. Is there a good reason? Is there not comfort sufficient to balance it, whatever it is? Why art thou cast down, O my soul? Joseph was careful to ascribe the glory to God. The chief butler's dream foretold his advancement. The chief baker's dream his death. It was not Joseph's fault that he brought the baker no better tidings. And thus ministers are but interpreters; they cannot make the thing otherwise than it is: if they deal faithfully, and their message prove unpleasing, it is not their fault. Joseph does not reflect upon his brethren that sold him; nor does he reflect on the wrong done him by his mistress and his master, but mildly states his own innocence. When we are called on to clear ourselves, we should carefully avoid, as much as may be, speaking ill of others. Let us be content to prove ourselves innocent, and not upbraid others with their guilt.

20-23 Joseph's interpretation of the dreams came to pass on the very day fixed. On Pharaoh's birth-day, all his servants attended him, and then the cases of these two came to be looked into. We may all profitably take notice of our birth-days, with thankfulness for the mercies of our birth, sorrow for the sinfulness of our lives, and expectation of the day of our death, as better than the day of our birth. But it seems strange that worldly people, who are so fond of living here, should rejoice at the end of one year after another of their short span of life. A Christian has cause to rejoice that he was born, also that he comes nearer to the end of his sin and sorrow, and nearer to his everlasting happiness. The chief butler remembered not Joseph, but forgot him. Joseph had deserved well at his hands, yet he forgot him. We must not think it strange, if in this world we have hatred shown us for our love, and slights for our kindness. See how apt those who are themselves at ease are to forget others in distress. Joseph learned by his disappointment to trust in God only. We cannot expect too little from man, nor too much from God. Let us not forget the sufferings, promises, and love of our Redeemer. We blame the chief butler's ingratitude to Joseph, yet we ourselves act much more ungratefully to the Lord Jesus. Joseph had but foretold the chief butler's enlargement, but Christ wrought out ours; he mediated with the King of Kings for us; yet we forget him, though often reminded of him, and though we have promised never to forget him. Thus ill do we requite Him, like foolish people and unwise.

View All Discussusion for Genesis Chapter 40... 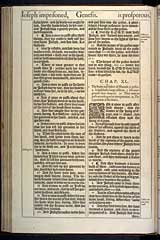