1 And Ioseph was brought downe to Egypt, and Potiphar an Officer of Pharaoh, captaine of þe guard, an Egyptian, bought him of the hand of the Ishmeelites, which had brought him downe thither.

2 And the LORD was with Ioseph, and hee was a prosperous man, and hee was in the house of his master the Egyptian.

4 And Ioseph found grace in his sight, and he serued him; and hee made him ouerseer ouer his house, and all that he had he put into his hand.

5 And it came to passe from the time that hee had made him overseer in his house, and ouer all that he had, that the LORD blessed the Egyptians house for Iosephs sake: and the blessing of the LORD was vpon all that he had in the house, and in the field.

6 And he left all that he had, in Iosephs hand: and he knew not ought he had, saue the bread which he did eate: and Ioseph was a goodly person, and well fauoured.

7 ¶ And it came to passe after these things, that his masters wife cast her eyes vpon Ioseph, and shee said, Lie with me.

8 But he refused, and said vnto his masters wife, Behold, my master wotteth not what is with mee in the house, and he hath committed all that he hath, to my hand.

9 There is none greater in this house then I: neither hath hee kept backe any thing from me, but thee, because thou art his wife: how then can I doe this great wickednesse, and sinne against God?

10 And it came to passe as she spake to Ioseph day by day, that hee hearkened not vnto her, to lie by her, or to bee with her.

11 And it came to passe about this time, that Ioseph went in to the house, to doe his busines, and there was none of the men of the house there within.

12 And shee caught him by his garment, saying, Lie with me: and he left his garment in her hand, and fled, and got him out.

13 And it came to passe, when she saw that hee had left his garment in her hand, and was fled forth;

14 That she called vnto the men of her house, and spake vnto them, saying, See, he hath brought in an Hebrew vnto vs, to mocke vs: he came in vnto me to lie with me, and I cried with a loud voice.

15 And it came to passe, when hee heard that I lifted vp my voice, and cried, that he left his garment with mee, and fled, and got him out.

16 And she laid vp his garment by her, vntill her lord came home.

17 And she spake vnto him, according to these words, saying, The Hebrew seruant which thou hast brought vnto vs, came in vnto me to mocke me.

18 And it came to passe as I lift vp my voice, and cried, that he left his garment with me, and fled out.

19 And it came to passe when his master heard the words of his wife, which she spake vnto him, saying, After this maner did thy seruant to me, that his wrath was kindled.

20 And Iosephs master tooke him, and put him into the prison, a place, where þe kings prisoners were bound: and he was there in the prison.

21 ¶ But the LORD was with Ioseph, and shewed him mercie, and gaue him fauour in the sight of the keeper of the prison.

22 And the keeper of the prison committed to Iosephs hand all the prisoners that were in the prison, and whatsoeuer they did there, he was the doer of it:

23 The keeper of the prison looked not to any thing, that was vnder his hand, because the LORD was with him: & that which he did, the LORD made it to prosper.

Joseph preferred by Potiphar. (1-6) Joseph resists temptation. (7-12) Joseph is falsely accused by his mistress. (13-18) He is cast into prison, God is with him there. (19-23)1-6 Our enemies may strip us of outward distinctions and ornaments; but wisdom and grace cannot be taken from us. They may separate us from friends, relatives, and country; but they cannot take from us the presence of the Lord. They may shut us from outward blessings, rob us of liberty, and confine us in dungeons; but they cannot shut us out from communion with God, from the throne of grace, or take from us the blessings of salvation. Joseph was blessed, wonderfully blessed, even in the house where he was a slave. God's presence with us, makes all we do prosperous. Good men are the blessings of the place where they live; good servants may be so, though mean and lightly esteemed. The prosperity of the wicked is, one way or other, for the sake of the godly. Here was a wicked family blessed for the sake of one good servant in it.

7-12 Beauty either in men or women, often proves a snare both to themselves and others. This forbids pride in it, and requires constant watchfulness against the temptation that attends it. We have great need to make a covenant with our eyes, lest the eyes infect the heart. When lust has got power, decency, and reputation, and conscience, are all sacrificed. Potiphar's wife showed that her heart was fully set to do evil. Satan, when he found he could not overcome Joseph with the troubles and the frowns of the world, for in them he still held fast his principle, assaulted him with pleasures, which have ruined more than the former. But Joseph, by the grace of God, was enabled to resist and overcome this temptation; and his escape was as great an instance of the Divine power, as the deliverance of the three children out of the fiery furnace. This sin was one which might most easily beset him. The tempter was his mistress, one whose favour would help him forward; and it was at his utmost peril if he slighted her, and made her his enemy. The time and place favoured the temptation. To all this was added frequent, constant urging. The almighty grace of God enabled Joseph to overcome this assault of the enemy. He urges what he owed both to God and his master. We are bound in honour, as well as justice and gratitude, not in any thing to wrong those who place trust in us, how secretly soever it may be done. He would not offend his God. Three arguments Joseph urges upon himself. 1. He considers who he was that was tempted. One in covenant with God, who professed religion and relation to him. 2. What the sin was to which he was tempted. Others might look upon it as a small matter; but Joseph did not so think of it. Call sin by its own name, and never lessen it. Let sins of this nature always be looked upon as great wickedness, as exceedingly sinful. 3. Against whom he was tempted to sin, against God. Sin is against God, against his nature and his dominion, against his love and his design. Those that love God, for this reason hate sin. The grace of God enabled Joseph to overcome the temptation, by avoiding the temper. He would not stay to parley with the temptation, but fled from it, as escaping for his life. If we mean not to do iniquity, let us flee as a bird from the snare, and as a roe from the hunter.

13-18 Joseph's mistress, having tried in vain to make him a guilty man, endeavoured to be avenged on him. Those that have broken the bonds of modesty, will never be held by the bonds of truth. It is no new thing for the best of men to be falsely accused of the worst of crimes, by those who themselves are the worst of criminals. It is well there is a day of discovery coming, in which all shall appear in their true characters.

19-23 Joseph's master believed the accusation. Potiphar, it is likely, chose that prison, because it was the worst; but God designed to open the way to Joseph's honour. Joseph was owned and righted by his God. He was away from all his friends and relations; he had none to help or comfort him; but the Lord was with Joseph, and showed him mercy. Those that have a good conscience in a prison, have a good God there. God gave him favour in the sight of the keeper of the prison; he trusted him to manage the affairs of the prison. A good man will do good wherever he is, and will be a blessing even in bonds and banishment. Let us not forget, through Joseph, to look unto Jesus, who suffered being tempted, yet without sin; who was slandered, and persecuted, and imprisoned, but without cause; who by the cross ascended to the throne. May we be enabled to follow the same path in submitting and in suffering, to the same place of glory.

View All Discussusion for Genesis Chapter 39... 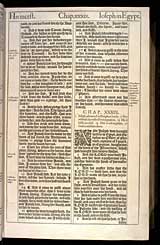