1 And it came to passe at that time, that Iudah went downe from his brethren, and turned in to a certaine Adullamite, whose name was Hirah:

2 And Iudah saw there a daughter of a certaine Canaanite, whose name was Shuah: and he tooke her, and went in vnto her.

3 And she conceiued & bare a sonne, and he called his name Er.

4 And shee conceiued againe, and bare a sonne, and shee called his name, Onan.

5 And she yet againe conceiued and bare a sonne, and called his name Shelah: and hee was at Chezib, when shee bare him.

6 And Iudah tooke a wife for Er his first borne, whose name was Tamar.

7 And Er, Iudahs first borne was wicked in the sight of the LORD, and the LORD slew him.

9 And Onan knew that the seed should not be his; and it came to passe when hee went in vnto his brothers wife, that hee spilled it on the ground, least that hee should giue seed to his brother.

10 And the thing which he did, displeased the LORD: wherefore hee slew him also.

11 Then said Iudah to Tamar his daughter in law, Remaine a widow at thy fathers house, til Shelah my sonne be growen: (for he said, Lest peraduenture he die also as his brethren did) and Tamar went and dwelt in her fathers house.

12 ¶ And in processe of time, the daughter of Shuah Iudahs wife died: and Iudah was comforted, and went vp vnto his sheepe-shearers to Timnath, he and his friend Hirah the Adullamite.

13 And it was told Lamar, saying, Behold, thy father in law goeth vp to Timnath to sheare his sheepe.

14 And shee put her widowes garments off from her, and couered her with a vaile, and wrapped her selfe, and sate in an open place, which is by the way to Timnath: for shee sawe that Shelah was growen, and she was not giuen vnto him to wife.

15 When Iudah saw her, he thought her to be an harlot: because she had couered her face.

16 And hee turned vnto her by the way, and said, Goe to, I pray thee, let me come in vnto thee: (for he knew not that she was his daughter in law) and she said, what wilt thou giue mee, that thou mayest come in vnto me?

17 And hee said, I will send thee a kid from the flocke: and shee saide, Wilt thou giue mee a pledge, till thou send it?

18 And he said, What pledge shall I giue thee? And she said, Thy signet, and thy bracelets, and thy staffe, that is in thine hand: and he gaue it her, & came in vnto her, and she conceived by him.

19 And shee arose and went away, and laid by her vaile from her, and put on the garments of her widowhood.

20 And Iudah sent the kidde by the hand of his friend the Adullamite, to receive his pledge from the womans hand: but he found her not.

21 Then hee asked the men of that place, saying, where is the harlot, that was openly by the way side? And they said, There was no harlot in this place.

22 And he returned to Iudah, and said, I cannot finde her: and also the men of the place said, That there was no harlot in this place.

23 And Iudah said, Let her take it to her, lest we bee shamed: behold, I sent this kidde, and thou hast not found her.

24 ¶ And it came to passe about three moneths after, that it was tolde Iudah, saying, Tamar thy daughter in law hath played the harlot, and also behold, she is with child by whoredom: and Iudah said, Bring her foorth, and let her be burnt.

25 When she was brought forth, she sent to her father in law, saying, By the man whose these are, am I with child: and shee said, Discerne, I pray thee, whose are these, the signet, and bracelets, and staffe.

26 And Iudah acknowledged them, and said, She hath bin more righteous then I: because that I gaue her not to Shelah my sonne: and he knew her againe no more.

27 ¶ And it came to passe in the time of her trauaile, that beholde, twinnes were in her wombe.

28 And it came to passe when shee trauailed, that the one put out his hand, and the midwife tooke and bound vpon his hand a skarlet threed, saying, This came out first.

29 And it came to passe as he drewe backe his hand, that behold, his brother came out: and she said, how hast thou broken foorth? this breach bee vpon thee: Therefore his name was called Pharez.

30 And afterward came out his brother that had the skarlet threed vpon his hand, and his name was called Zarah.

The profligate conduct of Judah and his family.

- This chapter gives an account of Judah and his family, and such an account it is, that it seems a wonder that of all Jacob's sons, our Lord should spring out of Judah, #Heb 7:14|. But God will show that his choice is of grace and not of merit, and that Christ came into the world to save sinners, even the chief. Also, that the worthiness of Christ is of himself, and not from his ancestors. How little reason had the Jews, who were so called from this Judah, to boast as they did, #Joh 8:41|. What awful examples the Lord proclaims in his punishments, of his utter displeasure at sin! Let us seek grace from God to avoid every appearance of sin. And let that state of humbleness to which Jesus submitted, when he came to put away sin by the sacrifice of himself, in appointing such characters as those here recorded, to be his ancestors, endear the Redeemer to our hearts.

View All Discussusion for Genesis Chapter 38... 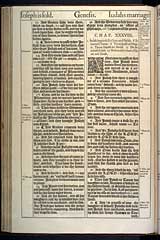