3 Now Israel loued Ioseph more then all his children, because he was the sonne of his old age: and he made him a coat of many colours.

4 And when his brethren saw that their father loued him more then all his brethren, they hated him, and could not speake peaceably vnto him.

5 ¶ And Ioseph dreamed a dreame, and he told it his brethren, and they hated him yet the more.

6 And he said vnto them, Heare, I pray you, this dreame which I haue dreamed.

7 For beholde, wee were binding sheaues in the field, and loe, my sheafe arose, and also stood vpright; and behold, your sheaues stood round about, and made obeisance to my sheafe.

9 ¶ And hee dreamed yet another dreame, and told it his brethren, and said, Behold, I haue dreamed a dreame more: and behold, the sunne and the moone, and the eleuen starres made obeisance to me.

10 And he told it to his father, and to his brethren: and his father rebuked him, and said vnto him, What is this dreame that thou hast dreamed? shal I, and thy mother, and thy brethren indeed come to bow downe our selues to thee, to the earth?

11 And his brethren enuied him: but his father obserued the saying.

12 ¶ And his brethren went to feed their fathers flocke in Shechem.

13 And Israel saide vnto Ioseph, Doe not thy brethren feed the flocke in Shechem? Come, and I will send thee vnto them: & he said to him, Here am I.

14 And he said to him, Goe, I pray thee, see whether it bee well with thy brethren, and well with the flockes, and bring me word againe: so hee sent him out of the vale of Hebron, and he came to Shechem.

15 ¶ And a certaine man found him, and behold, hee was wandring in the field, and the man asked him, saying, What seekest thou?

16 And he said, I seeke my brethren: tell me, I pray thee, where they feede their flockes.

17 And the man said, They are departed hence: for I heard them say, Let vs goe to Dothan. And Ioseph went after his brethren, and found them in Dothan.

18 And when they saw him a farre off, euen before he came neere vnto them, they conspired against him, to slay him.

19 And they said one to another, Behold, this dreamer commeth.

20 Come now therefore, and let vs slay him, and cast him into some pit, and we will say, Some euill beast hath deuoured him: and we shall see what will become of his dreames.

21 And Reuben heard it, and he deliuered him out of their hands, and said; Let vs not kill him.

22 And Reuben saide vnto them, Shed no blood, but cast him into this pit that is in the wildernesse, and lay no hand vpon him; that he might rid him out of their hands, to deliuer him to his father againe.

23 ¶ And it came to passe when Ioseph was come vnto his brethren, that they stript Ioseph out of his coate, his coat of many colours that was on him.

24 And they tooke him and cast him into a pit: and the pit was emptie, there was no water in it.

25 And they sate downe to eat bread: and they lift vp their eyes and looked, and behold, a company of Ishmeelites came from Gilead, with their camels, bearing spicery, & baulme, and myrrhe, going to cary it downe to Egypt.

26 And Iudah saide vnto his brethren, What profit is it if we slay our brother, and conceale his blood?

27 Come, and let vs sell him to the Ishmeelites, and let not our hand bee vpon him: for he is our brother, and our flesh; and his brethren were content.

28 Then there passed by Midianites merchant men, and they drew and lift vp Ioseph out of the pit, and sold Ioseph to the Ishmeelites for twentie pieces of siluer: and they brought Ioseph into Egypt.

29 ¶ And Reuben returned vnto the pit, and behold, Ioseph was not in the pit: and he rent his clothes.

30 And hee returned vnto his brethren and said, The childe is not, and I, whither shall I goe?

31 And they tooke Iosephs coat, and killed a kid of the goats, and dipped the coat in the blood.

32 And they sent the coat of many colours, and they brought it to their father, and said, This haue we found: know now whether it bee thy sonnes coat or no.

33 And he knew it, and said, It is my sonnes coat: an euil beast hath deuoured him; Ioseph is without doubt rent in pieces.

34 And Iacob rent his clothes, and put sackcloth vpon his loines, & mourned for his sonne many dayes.

35 And all his sonnes, and all his daughters rose vp to comfort him: but he refused to be comforted: and he said, For I will goe downe into the graue vnto my sonne, mourning; thus his father wept for him.

36 And the Medanites sold him into Egypt vnto Potiphar, an officer of Pharaohs, and captaine of the guard.

Joseph is loved of Jacob, but hated by his brethren. (1-4) Joseph's dreams. (5-11) Jacob sends Joseph to visit his brethren, They conspire his death. (12-22) Joseph's brethren sell him. (23-10) Jacob deceived, Joseph sold to Potiphar. (31-36)1-4 In Joseph's history we see something of Christ, who was first humbled and then exalted. It also shows the lot of Christians, who must through many tribulations enter into the kingdom. It is a history that has none like it, for displaying the various workings of the human mind, both good and bad, and the singular providence of God in making use of them for fulfilling his purposes. Though Joseph was his father's darling, yet he was not bred up in idleness. Those do not truly love their children, who do not use them to business, and labour, and hardships. The fondling of children is with good reason called the spoiling of them. Those who are trained up to do nothing, are likely to be good for nothing. But Jacob made known his love, by dressing Joseph finer than the rest of his children. It is wrong for parents to make a difference between one child and another, unless there is great cause for it, by the children's dutifulness, or undutifulness. When parents make a difference, children soon notice it, and it leads to quarrels in families. Jacob's sons did that, when they were from under his eye, which they durst not have done at home with him; but Joseph gave his father an account of their ill conduct, that he might restrain them. Not as a tale-bearer, to sow discord, but as a faithful brother.

5-11 God gave Joseph betimes the prospect of his advancement, to support and comfort him under his long and grievous troubles. Observe, Joseph dreamed of his preferment, but he did not dream of his imprisonment. Thus many young people, when setting out in the world, think of nothing but prosperity and pleasure, and never dream of trouble. His brethren rightly interpreted the dream, though they abhorred the interpretation of it. While they committed crimes in order to defeat it, they were themselves the instruments of accomplishing it. Thus the Jews understood what Christ said of his kingdom. Determined that he should not reign over them, they consulted to put him to death; and by his crucifixion, made way for the exaltation they designed to prevent.

12-22 How readily does Joseph wait his father's orders! Those children who are best beloved by their parents, should be the most ready to obey them. See how deliberate Joseph's brethren were against him. They thought to slay him from malice aforethought, and in cold blood. Whosoever hateth his brother is a murderer, #1Jo 3:15|. The sons of Jacob hated their brother because their father loved him. New occasions, as his dreams and the like, drew them on further; but this laid rankling in their hearts, till they resolved on his death. God has all hearts in his hands. Reuben had most reason to be jealous of Joseph, for he was the first-born; yet he proves his best friend. God overruled all to serve his own purpose, of making Joseph an instrument to save much people alive. Joseph was a type of Christ; for though he was the beloved Son of his Father, and hated by a wicked world, yet the Father sent him out of his bosom to visit us in great humility and love. He came from heaven to earth to seek and save us; yet then malicious plots were laid against him. His own not only received him not, but crucified him. This he submitted to, as a part of his design to redeem and save us.

23-30 They threw Joseph into a pit, to perish there with hunger and cold; so cruel were their tender mercies. They slighted him when he was in distress, and were not grieved for the affliction of Joseph, see #Am 6:6|; for when he was pining in the pit, they sat down to eat bread. They felt no remorse of conscience for the sin. But the wrath of man shall praise God, and the remainder of wrath he will restrain, #Ps 76:10|. Joseph's brethren were wonderfully restrained from murdering him, and their selling him as wonderfully turned to God's praise.

31-36 When Satan has taught men to commit one sin, he teaches them to try to conceal it with another; to hide theft and murder, with lying and false oaths: but he that covers his sin shall not prosper long. Joseph's brethren kept their own and one another's counsel for some time; but their villany came to light at last, and it is here published to the world. To grieve their father, they sent him Joseph's coat of colours; and he hastily thought, on seeing the bloody coat, that Joseph was rent in pieces. Let those that know the heart of a parent, suppose the agony of poor Jacob. His sons basely pretended to comfort him, but miserable, hypocritical comforters were they all. Had they really desired to comfort him, they might at once have done it, by telling the truth. The heart is strangely hardened by the deceitfulness of sin. Jacob refused to be comforted. Great affection to any creature prepares for so much the greater affliction, when it is taken from us, or made bitter to us: undue love commonly ends in undue grief. It is the wisdom of parents not to bring up children delicately, they know not to what hardships they may be brought before they die. From the whole of this chapter we see with wonder the ways of Providence. The malignant brothers seem to have gotten their ends; the merchants, who care not what they deal in so that they gain, have also obtained theirs; and Potiphar, having got a fine young slave, has obtained his! But God's designs are, by these means, in train for execution. This event shall end in Israel's going down to Egypt; that ends in their deliverance by Moses; that in setting up the true religion in the world; and that in the spread of it among all nations by the gospel. Thus the wrath of man shall praise the Lord, and the remainder thereof will he restrain.

View All Discussusion for Genesis Chapter 37... 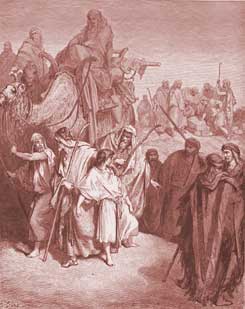 Joseph Is Sold by His Brothers 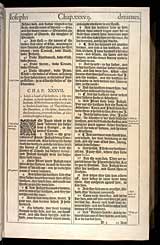