1 And God said vnto Iacob, Arise, goe vp to Bethel, and dwel there: and make there an Altar vnto God, that appeared vnto thee, when thou fleddest from the face of Esau thy brother.

2 Then Iacob said vnto his household, and to all that were with him, Put away the strange gods that are among you, and bee cleane, and change your garments,

3 And let vs arise, and goe vp to Bethel, and I will make there an Altar vnto God, who answered me in the day of my distresse, and was with me in the way which I went.

5 And they iourneyed: and the terrour of God was vpon the cities that were round about them, and they did not pursue after the sonnes of Iacob.

6 ¶ So Iacob came to Luz, which is in the land of Canaan (that is Bethel) hee and all the people that were with him.

7 And hee built there an Altar, and called the place El-Bethel, because there God appeared vnto him, when he fled from the face of his brother.

8 But Deborah Rebekahs nurse died, and she was buried beneath Bethel vnder an oke: and the name of it was called Allon Bachuth.

9 ¶ And God appeared vnto Iacob againe, when he came out of Padan Aram, and blessed him.

10 And God said vnto him, Thy name is Iacob: thy name shall not bee called any more Iacob, but Israel shall bee thy name; and hee called his name Israel.

11 And God saide vnto him, I am God Almightie: be fruitfull and multiply: a nation and a company of nations shall be of thee, and Kings shall come out of thy loynes.

12 And the land which I gaue Abraham, and Isaac, to thee I will giue it, and to thy seed after thee will I giue the land.

13 And God went vp from him, in the place where he talked with him.

14 And Iacob set vp a pillar in the place where he talked with him, euen a pillar of stone: and hee powred a drinke offering thereon, and he powred oile thereon.

15 And Iacob called the name of the place where God spake with him, Bethel.

16 ¶ And they iourneyed from Bethel: and there was but a litle way to come to Ephrath; and Rachel traueiled, and she had hard labour.

17 And it came to passe when shee was in hard labour, that the midwife said vnto her, Feare not: thou shalt haue this sonne also.

18 And it came to passe as her soule was in departing, (for she died) that she called his name Ben-oni: but his father called him Beniamin.

19 And Rachel died, and was buried in the way to Ephrath, which is Bethlehem.

20 And Iacob set a pillar vpon her graue: that is the pillar of Rachels graue vnto this day.

21 ¶ And Israel iourneyed and spread his tent beyond the towre of Edar.

22 And it came to passe when Israel dwelt in that land, that Reuben went & lay with Bilhah his fathers concubine: and Israel heard it. Now the sonnes of Iacob were twelue.

23 The sonnes of Leah: Reuben Iacobs first borne, and Simeon, and Leui, and Iudah, and Issachar, and Zebulun.

24 The sonnes of Rachel: Ioseph, and Beniamin.

25 And the sonnes of Bilhah, Rachels handmaid: Dan and Naphtali.

26 And the sonnes of Zilpah, Leahs handmaid: Gad, and Asher. These are the sonnes of Iacob, which were borne to him in Padan Aram.

27 ¶ And Iacob came vnto Isaac his father vnto Mamre, vnto the citie of Arbah (which is Hebron) where Abraham and Isaac soiourned.

28 And the dayes of Isaac were an hundred and fourescore yeeres.

29 And Isaac gaue vp the ghost and died, and was gathered vnto his people, being old and full of dayes: and his sonnes Esau and Iacob buried him.

God commands Jacob to go to Beth-el, He puts away idols from his family. (1-5) Jacob builds an altar, Death of Deborah, God blesses Jacob. (6-15) Death of Rachel. (16-20) Reuben's crime, The death of Isaac. (21-29)1-5 Beth-el was forgotten. But as many as God loves, he will remind of neglected duties, one way or other, by conscience or by providences. When we have vowed a vow to God, it is best not to defer the payment of it; yet better late than never. Jacob commanded his household to prepare, not only for the journey and removal, but for religious services. Masters of families should use their authority to keep up religion in their families, #Jos 24:15|. They must put away strange gods. In families where there is a face of religion, and an altar to God, yet many times there is much amiss, and more strange gods than one would suppose. They must be clean, and change their garments. These were but outward ceremonies, signifying the purifying and change of the heart. What are clean clothes, and new clothes, without a clean heart, and a new heart? If Jacob had called for these idols sooner, they had parted with them sooner. Sometimes attempts for reformation succeed better than we could have thought. Jacob buried their images. We must be wholly separated from our sins, as we are from those that are dead and buried out of sight. He removed from Shechem to Beth-el. Though the Canaanites were very angry against the sons of Jacob for their barbarous usage of the Shechemites, yet they were so kept back by Divine power, that they could not take the opportunity now offered to avenge them. The way of duty is the way of safety. When we are about God's work, we are under special protection; God is with us, while we are with him; and if He be for us, who can be against us? God governs the world more by secret terrors on men's minds than we are aware of.

6-15 The comfort the saints have in holy ordinances, is not so much from Beth-el, the house of God, as from El-beth-el, the God of the house. The ordinances are empty things, if we do not meet with God in them. There Jacob buried Deborah, Rebekah's nurse. She died much lamented. Old servants in a family, that have in their time been faithful and useful, ought to be respected. God appeared to Jacob. He renewed the covenant with him. I am God Almighty, God all-sufficient, able to make good the promise in due time, and to support thee and provide for thee in the mean time. Two things are promised; that he should be the father of a great nation, and that he should be the master of a good land. These two promises had a spiritual signification, which Jacob had some notion of, though not so clear and distinct as we now have. Christ is the promised Seed, and heaven is the promised land; the former is the foundation, and the latter the top-stone, of all God's favours.

16-20 Rachel had passionately said, Give me children, or else I die; and now that she had children, she died! The death of the body is but the departure of the soul to the world of spirits. When shall we learn that it is God alone who really knows what is best for his people, and that in all worldly affairs the safest path for the Christian is to say from the heart, It is the Lord, let him do what seemeth him good. Here alone is our safety and our comfort, to know no will but his. Her dying lips called her newborn son Ben-oni, the son of my sorrow; and many a son proves to be the heaviness of her that bare him. Children are enough the sorrow of their mothers; they should, therefore, when they grow up, study to be their joy, and so, if possible, to make them some amends. But Jacob, because he would not renew the sorrowful remembrance of the mother's death every time he called his son, changed his name to Benjamin, the son of my right hand: that is, very dear to me; the support of my age, like the staff in my right hand.

21-29 What a sore affliction Reuben's sin was, is shown, " and Israel heard it." No more is said, but that is enough. Reuben thought that his father would never hear of it; but those that promise themselves secrecy in sin, are generally disappointed. The age and death of Isaac are recorded, though he died not till after Joseph was sold into Egypt. Isaac lived about forty years after he had made his will, chap. #27:2|. We shall not die an hour the sooner, but much the better, for timely setting our hearts and houses in order. Particular notice is taken of the agreement of Esau and Jacob at their father's funeral, to show how God had wonderfully changed Esau's mind. It is awful to behold relations, sometimes for a little of this world's goods, disputing over the graves of their friends, while they are near going to the grave themselves.

View All Discussusion for Genesis Chapter 35... 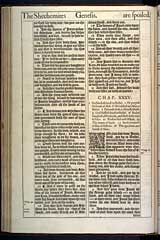