1 And Dinah the daughter of Leah, which shee bare vnto Iacob, went out to see the daughters of the land.

2 And when Shechem the sonne of Hamor the Hiuite, prince of the countrey saw her, he tooke her, and lay with her, and defiled her.

3 And his soule claue vnto Dinah the daughter of Iacob, and hee loued the damsell, and spake kindly vnto the damsell.

4 And Shechem spake vnto his father Hamor, saying, Get mee this damsell to wife.

5 And Iacob heard that he had defiled Dinah his daughter (now his sonnes were with his cattel in the field) and Iacob helde his peace vntill they were come.

6 ¶ And Hamor the father of Shechem went out vnto Iacob to commune with him.

7 And the sonnes of Iacob came out of the field when they heard it, and the men were grieued: and they were very wroth, because hee had wrought folly in Israel, in lying with Iacobs daughter; which thing ought not to be done.

8 And Hamor communed with them, saying, The soule of my sonne Shechem longeth for your daughter: I pray you giue her him to wife.

10 And ye shall dwell with vs, and the land shall be before you: dwell and trade you therein, and get you possessions therein.

11 And Shechem said vnto her father, and vnto her brethren, Let mee finde grace in your eyes, and what yee shall say vnto me, I will giue.

12 Aske mee neuer so much dowrie and gift, and I will giue according as yee shall say vnto mee: but giue me the damsell to wife.

13 And the sonnes of Iacob answered Shechem, and Hamor his father deceitfully, and said, because he had defiled Dinah their sister.

14 And they saide vnto them, wee cannot doe this thing, to giue our sister to one that is vncircumcised: for that were a reproch vnto vs.

15 But in this will we consent vnto you: If ye will be as we be, that euery male of you be circumcised:

17 But if ye will not hearken vnto vs, to be circumcised, then will we take our daughter, and we will be gone.

18 And their words pleased Hamor, and Shechem Hamors sonne.

19 And the yong man deferred not to doe the thing, because he had delight in Iacobs daughter: and he was more honourable then all the house of his father.

21 These men are peaceable with vs, therefore let them dwel in the land, and trade therein: for the land, behold, it is large enough for them: let vs take their daughters to vs for wiues, and let vs giue them our daughters.

22 Onely herein will the men consent vnto vs, for to dwell with vs to be one people, if euery male among vs bee circumcised, as they are circumcised.

23 Shall not their cattell, and their substance, and euery beast of theirs bee ours? onely let vs consent vnto them, and they will dwell with vs.

25 ¶ And it came to passe on the thirde day when they were sore, that two of the sonnes of Iacob, Simeon and Leui, Dinahs brethren, tooke each man his sword and came vpon the citie boldly, and slew all the males.

26 And they slew Hamor and Shechem his sonne, with the edge of the sword, and tooke Dinah out of Shechems house, and went out.

27 The sonnes of Iacob came vpon the slaine, and spoiled the citie, because they had defiled their sister.

29 And all their wealth, and all their little ones, and their wiues tooke they captiue, and spoiled euen all that was in the house.

30 And Iacob said to Simeon and Leui, Ye haue troubled me to make me to stinke among the inhabitants of the land, amongst the Canaanites, and the Perizzites: and I being few in number, they shall gather themselues together against me, and slay me, and I shal be destroyed, I and my house.

31 And they said, Should hee deale with our sister, as with an harlot?

Dinah defiled by Shechem. (1-19) The Shechemites murdered by Simeon and Levi. (20-31)1-19 Young persons, especially females, are never so safe and well off as under the care of pious parents. Their own ignorance, and the flattery and artifices of designing, wicked people, who are ever laying snares for them, expose them to great danger. They are their own enemies if they desire to go abroad, especially alone, among strangers to true religion. Those parents are very wrong who do not hinder their children from needlessly exposing themselves to danger. Indulged children, like Dinah, often become a grief and shame to their families. Her pretence was, to see the daughters of the land, to see how they dressed, and how they danced, and what was fashionable among them; she went to see, yet that was not all, she went to be seen too. She went to get acquaintance with the Canaanites, and to learn their ways. See what came of Dinah's gadding. The beginning of sin is as the letting forth of water. How great a matter does a little fire kindle! We should carefully avoid all occasions of sin and approaches to it.

20-31 The Shechemites submitted to the sacred rite, only to serve a turn, to please their prince, and to enrich themselves, and it was just with God to bring punishment upon them. As nothing secures us better than true religion, so nothing exposes us more than religion only pretended to. But Simeon and Levi were most unrighteous. Those who act wickedly, under the pretext of religion, are the worst enemies of the truth, and harden the hearts of many to destruction. The crimes of others form no excuse for us. Alas! how one sin leads on to another, and, like flames of fire, spread desolation in every direction! Foolish pleasures lead to seduction; seduction produces wrath; wrath thirsts for revenge; the thirst of revenge has recourse to treachery; treachery issues in murder; and murder is followed by other lawless actions. Were we to trace the history of unlawful commerce between the sexes, we should find it, more than any other sin, ending in blood.

View All Discussusion for Genesis Chapter 34... 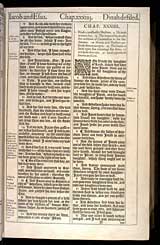