1 And Iacob lifted vp his eyes, and looked, and behold, Esau came, and with him foure hundreth men: and hee diuided the children vnto Leah, and vnto Rachel, and vnto the two handmaids.

2 And he put the handmaides, and their chidren foremost, and Leah and her children after, and Rachel and Ioseph hindermost.

3 And hee passed ouer before them, and bowed himselfe to the ground seuen times, vntill hee came neere to his brother.

4 And Esau ran to meete him, and imbraced him, and fell on his necke, and kissed him, and they wept.

5 And he lift vp his eyes, and sawe the women, and the children, and said, who are those with thee? And he said, The children which God hath graciously giuen thy seruant.

6 Then the handmaidens came neere; they and their children, and they bowed themselues.

8 And he said, What meanest thou by all this droue, which I met? And he said, These are to find grace in the sight of my lord.

9 And Esau said, I haue enough: my brother, keepe that thou hast vnto thy selfe.

10 And Iacob saide, Nay, I pray thee: if now I haue found grace in thy sight, then receiue my present at my hand: for therefore I haue seene thy face, as though I had seene the face of God; and thou wast pleased with me.

11 Take, I pray thee, my blessing that is brought to thee; because God hath dealt graciously with mee, and because I haue enough: and hee vrged him, and he tooke it.

12 And he said, Let vs take our iourney, and let vs goe, and I will goe before thee.

13 And hee said vnto him, My lord knoweth, that the children are tender, and the flockes and heards with yong are with mee: and if men should ouer-driue them one day, all the flocke will die.

14 Let my lord, I pray thee, passe ouer before his seruant, and I will leade on softly, according as the cattell that goeth before me, and the children be able to endure, vntill I come vnto my lord vnto Seir.

15 And Esau said, Let me now leaue with thee some of the folke that are with me: And hee said, What needeth it? let me finde grace in the sight of my lord.

16 ¶ So Esau returned that day, on his way vnto Seir.

17 And Iacob iourneyed to Succoth, and built him an house, and made boothes for his cattell: therefore the name of the place is called Succoth.

18 ¶ And Iacob came to Shalem, a citie of Shechem, which is the land of Canaan, when he came from Padan Aram, and pitched his tent before the Citie.

19 And he bought a parcell of a field where hee had spread his tent, at the hand of the children of Hamor Shechems father, for an hundred pieces of money.

20 And hee erected there an Altar, and called it El-Elohe-Israel.

The friendly meeting of Jacob and Esau. (1-16) Jacob comes to Succoth and Shalem, He builds an altar. (17-20)1-16 Jacob, having by prayer committed his case to God, went on his way. Come what will, nothing can come amiss to him whose heart is fixed, trusting in God. Jacob bowed to Esau. A humble, submissive behaviour goes far towards turning away wrath. Esau embraced Jacob. God has the hearts of all men in his hands, and can turn them when and how he pleases. It is not in vain to trust in God, and to call upon him in the day of trouble. And when a man's ways please the Lord he maketh even his enemies to be at peace with him. Esau receives Jacob as a brother, and much tenderness passes between them. Esau asks, Who are those with thee? To this common question, Jacob spoke like himself, like a man whose eyes are ever directed towards the Lord. Jacob urged Esau, though his fear was over, and he took his present. It is well when men's religion makes them generous, free-hearted, and open-handed. But Jacob declined Esau's offer to accompany him. It is not desirable to be too intimate with superior ungodly relations, who will expect us to join in their vanities, or at least to wink at them, though they blame, and perhaps mock at, our religion. Such will either be a snare to us, or offended with us. We shall venture the loss of all things, rather than endanger our souls, if we know their value; rather than renounce Christ, if we truly love him. And let Jacob's care and tender attention to his family and flocks remind us of the good Shepherd of our souls, who gathers the lambs with his arm, and carries them in his bosom, and gently leads those that are with young, #Isa 40:11|. As parents, teachers or pastors, we should all follow his example.

View All Discussusion for Genesis Chapter 33... 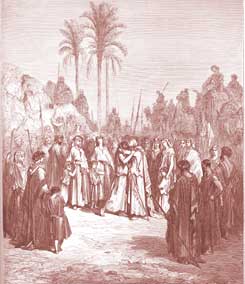 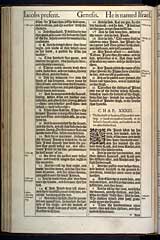