1 And Iacob went on his way, and the Angels of God met him.

2 And when Iacob saw them, he said, This is Gods hoste: and hee called the name of that place Mahanaim.

3 And Iacob sent messengers before him, to Esau his brother, vnto the land of Seir, the countrey of Edom.

4 And he commaunded them, saying, Thus shall ye speake vnto my lord Esau, Thy seruant Iacob saith thus, I haue soiourned with Laban, and stayed there vntill now.

5 And I haue oxen, and asses, flockes, and men seruants and women seruants: and I haue sent to tell my lord, that I may find grace in thy sight.

6 ¶ And the messengers returned to Iacob, saying, Wee came to thy brother Esau, and also he commeth to meet thee, and foure hundred men with him.

7 Then Iacob was greatly afraid, and distressed, and he diuided the people that was with him, and the flockes, and herdes, and the camels into two bands,

8 And said, If Esau come to the one company, and smite it, then the other company which is left, shall escape.

10 I am not worthy of the least of all the mercies, and of all the trueth, which thou hast shewed vnto thy seruant: for with my staffe I passed ouer this Iordan, and now I am become two bands.

12 And thou saidst, I will surely doe thee good, and make thy seed as the sand of the sea, which cannot be numbred for multitude.

13 ¶ And he lodged there that same night, and tooke of that which came to his hand, a present for Esau his brother:

16 And hee deliuered them into the hand of his seruants, euery droue by themselues, and said vnto his seruants, Passe ouer before me, and put a space betwixt droue and droue.

17 And he commanded the formost, saying, When Esau my brother meeteth thee, and asketh thee, saying, whose art thou? and whither goest thou? and whose are these before thee?

18 Then thou shalt say, They be thy seruant Iacobs: it is a present sent vnto my lord Esau: and behold also, he is behind vs.

19 And so commanded he the second, and the third, and all that followed the droues, saying, On this maner shal you speake vnto Esau, when you find him.

20 And say ye moreouer, Beholde, thy seruant Iacob is behind vs: for he said, I will appease him with the present that goeth before me, and afterward I will see his face; peraduenture he will accept of me.

21 So went the present ouer before him: and himselfe lodged that night in the company.

22 And hee rose vp that night, and tooke his two wiues, and his two women seruants, and his eleuen sonnes, and passed ouer the foord Iabbok.

23 And he tooke them, and sent them ouer the brooke, and sent ouer that hee had.

24 ¶ And Iacob was left alone: and there wrestled a man with him, vntill the breaking of the day.

25 And when he saw, that he preuailed not against him, he touched the hollow of his thigh: and the hollow of Iacobs thigh was out of ioynt, as hee wrestled with him.

26 And he said, Let me goe, for the day breaketh: and he said, I will not let thee goe, except thou blesse me.

28 And he said, Thy name shall be called no more Iacob, but Israel: for as a prince hast thou power with God, and with men, and hast preuailed.

29 And Iacob asked him, and saide, Tell me, I pray thee, thy name: and he said, wherefore is it, that thou doest aske after my name? and he blessed him there.

30 And Iacob called the name of the place Peniel: for I haue seene God face to face, and my life is preserued.

31 And as he passed ouer Penuel, the sunne rose vpon him, and he halted vpon his thigh.

32 Therefore the children of Israel eate not of the sinewe which shranke, which is vpon the hollow of the thigh, vnto this day: because hee touched the hollow of Iacobs thigh, in the sinewe that shranke.

Jacob's vision at Mahanaim, His fear of Esau. (1-8) Jacob's earnest prayer for deliverance, He prepares a present for Esau. (9-23) He wrestles with the Angel. (24-32)1-8 The angels of God appeared to Jacob, to encourage him with the assurance of the Divine protection. When God designs his people for great trials, he prepares them by great comforts. While Jacob, to whom the promise belonged, had been in hard service, Esau was become a prince. Jacob sent a message, showing that he did not insist upon the birth-right. Yielding pacifies great offences, #Ec 10:4|. We must not refuse to speak respectfully, even to those unjustly angry with us. Jacob received an account of Esau's warlike preparations against him, and was greatly afraid. A lively sense of danger, and quickening fear arising from it, may be found united with humble confidence in God's power and promise.

9-23 Times of fear should be times of prayer: whatever causes fear, should drive us to our knees, to our God. Jacob had lately seen his guards of angels, but in this distress he applied to God, not to them; he knew they were his fellow-servants, #Re 22:9|. There cannot be a better pattern for true prayer than this. Here is a thankful acknowledgement of former undeserved favours; a humble confession of unworthiness; a plain statement of his fears and distress; a full reference of the whole affair to the Lord, and resting all his hopes on him. The best we can say to God in prayer, is what he has said to us. Thus he made the name of the Lord his strong tower, and could not but be safe. Jacob's fear did not make him sink into despair, nor did his prayer make him presume upon God's mercy, without the use of means. God answers prayers by teaching us to order our affairs aright. To pacify Esau, Jacob sent him a present. We must not despair of reconciling ourselves to those most angry against us.

24-32 A great while before day, Jacob being alone, more fully spread his fears before God in prayer. While thus employed, One in the likeness of a man wrestled with him. When the spirit helpeth our infirmities, and our earnest and vast desires can scarcely find words to utter them, and we still mean more than we can express, then prayer is indeed wrestling with God. However tried or discouraged, we shall prevail; and prevailing with Him in prayer, we shall prevail against all enemies that strive with us. Nothing requires more vigour and unceasing exertion than wrestling. It is an emblem of the true spirit of faith and prayer. Jacob kept his ground; though the struggle continued long, this did not shake his faith, nor silence his prayer. He will have a blessing, and had rather have all his bone put out of joint than go away without one. Those who would have the blessing of Christ, must resolve to take no denial. The fervent prayer is the effectual prayer. The Angel puts a lasting mark of honour upon him, by changing his name. Jacob signifies a supplanter. From henceforth he shall be celebrated, not for craft and artful management, but for true valour. Thou shalt be called Israel, a prince with God, a name greater than those of the great men of the earth. He is a prince indeed that is a prince with God; those are truly honourable that are mighty in prayer. Having power with God, he shall have power with men too; he shall prevail, and gain Esau's favour. Jacob gives a new name to the place. He calls it Peniel, the face of God, because there he had seen the appearance of God, and obtained the favour of God. It becomes those whom God honours, to admire his grace towards them. The Angel who wrestled with Jacob was the second Person in the sacred Trinity, who was afterwards God manifest in the flesh, and who, dwelling in human nature, is called Immanuel, #Ho 12:4,5|. Jacob halted on his thigh. It might serve to keep him from being lifted up with the abundance of the revelations. The sun rose on Jacob: it is sun-rise with that soul, which has had communion with God.

View All Discussusion for Genesis Chapter 32... 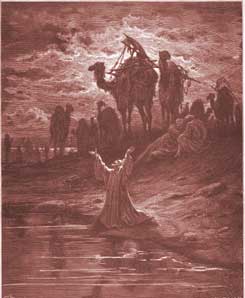 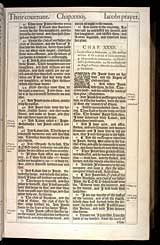