1 And there was a famine in the land, besides the first famine that was in the dayes of Abraham. And Isaac went vnto Abimelech King of the Philistims, vnto Gerar.

2 And the LORD appeared vnto him and said, Goe not downe into Egypt; dwell in the land which I shall tell thee of.

3 Soiourne in this land, and I wil be with thee, and will blesse thee: for vnto thee, and vnto thy seed I will giue all these countreys, and I wil performe the othe, which I sware vnto Abraham thy father.

4 And I wil make thy seed to multiply as the starres of heauen, and will giue vnto thy seed all these countreys: and in thy Seed shall all the nations of the earth be blessed:

5 Because that Abraham obeyed my voyce, and kept my charge, my Commandements, my Statutes and my Lawes.

6 ¶ And Isaac dwelt in Gerar.

8 And it came to passe when he had bene there a long time, that Abimelech king of the Philistims looked out at a window, and saw, and behold, Isaac was sporting with Rebekah his wife.

9 And Abimelech called Isaac and said, Behold, of a suretie she is thy wife: and how saidst thou, She is my sister? And Isaac said vnto him, Because I said, Lest I die for her.

10 And Abimelech said, What is this thou hast done vnto vs? one of the people might lightly haue lien with thy wife, and thou shouldest haue brought guiltinesse vpon vs.

11 And Abimelech charged all his people, saying, Hee that toucheth this man or his wife, shall surely bee put to death.

12 Then Isaac sowed in that land, and receiued in the same yeere an hundred fold: & the LORD blessed him.

13 And the man waxed great, and went forward, and grew vntill he became very great.

15 For all the wels which his fathers seruants had digged in the dayes of Abraham his father, the Philistims had stopped them, & filled them with earth.

16 And Abimelech said vnto Isaac, Goe from vs: for thou art much mightier then we.

17 ¶ And Isaac departed thence, and pitched his tent in the valley of Gerar, and dwelt there.

18 And Isaac digged againe the wels of water, which they had digged in the dayes of Abraham his father: for the Philistims had stopped them after the death of Abraham, and he called their names after the names by which his father had called them.

19 And Isaacs seruants digged in the valley, and found there a well of springing water.

20 And the heardmen of Gerar did striue with Isaacs heardmen, saying, The water is ours; and hee called the name of the well, Esek, because they stroue with him.

21 And they digged another well, and stroue for that also: and hee called the name of it, Sitnah.

22 And he remoued from thence, and digged another well, and for that they stroue not: and he called the name of it Rehoboth: and he said, For now the LORD hath made roome for vs, and we shall be fruitfull in the land.

23 And he went vp from thence to Beer-sheba.

24 And the LORD appeared vnto him the same night, and saide, I am the God of Abraham thy father: feare not, for I am with thee, and will blesse thee, and multiply thy seede, for my seruant Abrahams sake.

25 And he builded an altar there, and called vpon the name of the LORD, and pitched his tent there: and there Isaacs seruants digged a well.

26 ¶ Then Abimelech went to him from Gerar, and Ahuzzath one of his friends, and Phichol the chiefe captaine of his armie.

27 And Isaac saide vnto them, Wherefore come ye to me, seeing ye hate me, and haue sent me away from you?

28 And they said, we saw certainly that the LORD was with thee: and wee said, Let there be now an othe betwixt vs, euen betwixt vs and thee, and let vs make a couenant with thee,

29 That thou wilt doe vs no hurt, as we haue not touched thee, and as we haue done vnto thee nothing but good, and haue sent thee away in peace: thou art now the blessed of the LORD.

30 And he made them a feast, and they did eate and drinke.

31 And they rose vp betimes in the morning, and sware one to another: and Isaac sent them away, and they departed from him in peace.

32 And it came to passe the same day, that Isaacs seruants came, and tolde him concerning the well which they had digged, and said vnto him, we haue found water.

33 And he called it Shebah: therefore the name of the citie is Beer-sheba vnto this day.

35 Which were a griefe of minde vnto Isaac and to Rebekah.

Isaac, because of famine, goes to Gerar. (1-5) He denies his wife and is reproved by Abimelech. (6-11) Isaac grows rich, The Philistines' envy. (12-17) Isaac digs wells God blesses him. (18-25) Abimelech makes a covenant with Isaac. (26-33) Esau's wives. (34,35)1-5 Isaac had been trained up in a believing dependence upon the Divine grant of the land of Canaan to him and his heirs; and now that there is a famine in the land, Isaac still cleaves to the covenant. The real worth of God's promises cannot be lessened to a believer by any cross providences that may befall him. If God engage to be with us, and we are where he would have us to be, nothing but our own unbelief and distrust can prevent our comfort. The obedience of Abraham to the Divine command, was evidence of that faith, whereby, as a sinner, he was justified before God, and the effect of that love whereby true faith works. God testifies that he approved this obedience, to encourage others, especially Isaac.

6-11 There is nothing in Isaac's denial of his wife to be imitated, nor even excused. The temptation of Isaac is the same as that which overcame his father, and that in two instances. This rendered his conduct the greater sin. The falls of those who are gone before us are so many rocks on which others have split; and the recording of them is like placing buoys to save future mariners. This Abimelech was not the same that lived in Abraham's days, but both acted rightly. The sins of professors shame them before those that are not themselves religious.

12-17 God blessed Isaac. Be it observed, for the encouragement of poor tenants who occupy other people's lands, and are honest and industrious, that God blessed him with a great increase. The Philistines envied Isaac. It is an instance of the vanity of the world; for the more men have of it, the more they are envied, and exposed to censure and injury. Also of the corruption of nature; for that is an ill principle indeed, which makes men grieve at the good of others. They made Isaac go out of their country. That wisdom which is from above, will teach us to give up our right, and to draw back from contentions. If we are wrongfully driven from one place, the Lord will make room for us in another.

18-25 Isaac met with much opposition in digging wells. Two were called Contention and Hatred. See the nature of worldly things; they make quarrels, and are occasions of strife; and what is often the lot of the most quiet and peaceable; those who avoid striving, yet cannot avoid being striven with. And what a mercy it is to have plenty of water; to have it without striving for it! The more common this mercy is, the more reason to be thankful for it. At length Isaac digged a well, for which they strove not. Those that study to be quiet, seldom fail of being so. When men are false and unkind, still God is faithful and gracious; and his time to show himself so is, when we are most disappointed by men. The same night that Isaac came weary and uneasy to Beer-sheba, God brought comforts to his soul. Those may remove with comfort who are sure of God's presence.

26-33 When a man's ways please the Lord, he maketh even his enemies to be at peace with him, #Pr 16:7|. Kings' hearts are in his hands, and when he pleases, he can turn them to favour his people. It is not wrong to stand upon our guard in dealing with those who have acted unfairly. But Isaac did not insist on the unkindnesses they had done him; he freely entered into friendship with them. Religion teaches us to be neighbourly, and, as much as in us lies, to live peaceable with all men. Providence smiled upon what Isaac did; God blessed his labours.

34,35 Esau was foolish in marrying two wives together, and still more in marrying Canaanites, strangers to the blessing of Abraham, and subject to the curse of Noah. It grieved his parents that he married without their advice and consent. It grieved them that he married among those who had no religion. Children have little reason to expect God's blessing who do that which is a grief of mind to good parents.

View All Discussusion for Genesis Chapter 26... 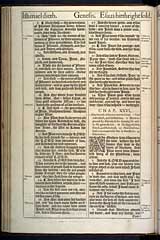