2 For Sarah conceiued, and bare Abraham a sonne in his old age, at the set time, of which God had spoken to him.

3 And Abraham called the name of his sonne, that was borne vnto him, whom Sarah bare to him, Isaac.

4 And Abraham circumcised his sonne Isaac, being eight dayes old, as God had commanded him.

5 And Abraham was an hundred yeeres old, when his sonne Isaac was borne vnto him.

6 ¶ And Sarah said, God hath made me to laugh, so that all that heare, will laugh with me.

7 And she said, Who would haue said vnto Abraham, that Sarah should haue giuen children sucke? for I haue borne him a sonne in his old age.

8 And the child grew, and was weaned: and Abraham made a great feast, the same day that Isaac was weaned.

9 ¶ And Sarah saw the sonne of Hagar the Egyptian, which shee had borne vnto Abraham, mocking.

10 Wherfore she said vnto Abraham, Cast out this bond woman, and her sonne: for the sonne of this bond woman shall not be heire with my sonne, euen with Isaac.

11 And the thing was very grieuous in Abrahams sight, because of his sonne.

12 ¶ And God said vnto Abraham, Let it not be grieuous in thy sight, because of the lad, and because of thy bond woman. In all that Sarah hath said vnto thee, hearken vnto her voice: for in Isaac shall thy seed be called.

13 And also, of the sonne of the bond woman will I make a nation, because he is thy seed.

14 And Abraham rose vp earely in the morning, and tooke bread, and a bottle of water, and gaue it vnto Hagar, (putting it on her shoulder,) and the child, and sent her away: and shee departed, and wandered in the wildernesse of Beer-sheba.

15 And the water was spent in the bottle, and shee cast the child vnder one of the shrubs.

18 Arise, lift vp the lad, and hold him in thine hand: for I will make him a great nation.

19 And God opened her eyes, and she saw a well of water, and shee went, and filled the bottle with water, and gaue the lad drinke.

20 And God was with the lad, and he grew, and dwelt in the wildernesse, and became an archer.

21 And hee dwelt in the wildernesse of Paran: and his mother tooke him a wife out of the land of Egypt.

22 ¶ And it came to passe at that time, that Abimelech and Phichol the chiefe captaine of his hoste spake vnto Abraham, saying, God is with thee in all that thou doest.

23 Now therefore sweare vnto mee here by God, that thou wilt not deale falsly with me, nor with my sonne, nor with my sonnes sonne: but according to the kindnesse that I haue done vnto thee, thou shalt doe vnto me, and to the land wherein thou hast soiourned.

24 And Abraham saide, I will sweare.

25 And Abraham reproued Abimelech, because of a well of water, which Abimelechs seruants had violently taken away.

26 And Abimelech saide, I wote not who hath done this thing: neither didst thou tell me, neither yet heard I of it, but to day.

27 And Abraham tooke sheepe and oxen, and gaue them vnto Abimelech: and both of them made a couenant.

28 And Abraham set seuen ewe lambes of the flocke by themselues.

29 And Abimelech said vnto Abraham, What meane these seuen ewe lambes, which thou hast set by themselues?

30 And he said, For these seuen ewe lambs shalt thou take of my hand, that they may be a witnesse vnto me, that I haue digged this well.

31 Wherefore he called that place, Beer-sheba: because there they sware both of them.

32 Thus they made a couenant at Beeer-sheba: then Abimelech rose vp, and Phichol the chiefe captaine of his hoste, and they returned into the land of the Philistines.

33 ¶ And Abraham planted a groue in Beer-sheba, and called there on the Name of the LORD, the euerlasting God.

34 And Abraham soiourned in the Philistines land, many dayes.

Birth of Isaac, Sarah's joy. (1-8) Ishmael mocks Isaac. (9-13) Hagar and Ishmael are cast forth, They are relieved and comforted by an angel. (14-21) Abimelech's covenant with Abraham. (22-34)1-8 Few under the Old Testament were brought into the world with such expectations as Isaac. He was in this a type of Christ, that Seed which the holy God so long promised, and holy men so long expected. He was born according to the promise, at the set time of which God had spoken. God's promised mercies will certainly come at the time which He sets, and that is the best time. Isaac means "laughter," and there was good reason for the name, ch. #17:17; 18:13|. When the Sun of comfort is risen upon the soul, it is good to remember how welcome the dawning of the day was. When Sarah received the promise, she laughed with distrust and doubt. When God gives us the mercies we began to despair of, we ought to remember with sorrow and shame our sinful distrust of his power and promise, when we were in pursuit of them. This mercy filled Sarah with joy and wonder. God's favours to his covenant people are such as surpass their own and others' thoughts and expectations: who could imagine that he should do so much for those that deserve so little, nay, for those that deserve so ill? Who would have said that God should send his Son to die for us, his Spirit to make us holy, his angels to attend us? Who would have said that such great sins should be pardoned, such mean services accepted, and such worthless worms taken into covenant? A short account of Isaac's infancy is given. God's blessing upon the nursing of children, and the preservation of them through the perils of the infant age, are to be acknowledged as signal instances of the care and tenderness of the Divine providence. See #Ps 22:9,10; Ho 11:1,2|.

9-13 Let us not overlook the manner in which this family matter instructs us not to rest in outward privileges, or in our own doings. And let us seek the blessings of the new covenant by faith in its Divine Surety. Ishmael's conduct was persecution, being done in profane contempt of the covenant and promise, and with malice against Isaac. God takes notice of what children say and do in their play; and will reckon with them, if they say or do amiss, though their parents do not. Mocking is a great sin, and very provoking to God. And the children of promise must expect to be mocked. Abraham was grieved that Ishmael should misbehave, and Sarah demand so severe a punishment. But God showed him that Isaac must be the father of the promised Seed; therefore, send Ishmael away, lest he corrupt the manners, or try to take the rights of Isaac. The covenant seed of Abraham must be a people by themselves, not mingled with those who were out of covenant: Sarah little thought of this; but God turned aright what she said.

14-21 If Hagar and Ishmael had behaved well in Abraham's family, they might have continued there; but they were justly punished. By abusing privileges, we forfeit them. Those who know not when they are well off, will be made to know the worth of mercies by the want of them. They were brought to distress in the wilderness. It is not said that the provisions were spent, or that Abraham sent them away without money. But the water was spent; and having lost their way, in that hot climate Ishmael was soon overcome with fatigue and thirst. God's readiness to help us when we are in trouble, must not slacken, but quicken our endeavours to help ourselves. The promise concerning her son is repeated, as a reason why Hagar should bestir herself to help him. It should engage our care and pains about children and young people, to consider that we know not what great use God has designed them for, and may make of them. The angel directs her to a present supply. Many who have reason to be comforted, go mourning from day to day, because they do not see the reason they have for comfort. There is a well of water near them in the covenant of grace, but they are not aware of it, till the same God that opened their eyes to see their wound, opens them to see their remedy. Paran was a wild place, fit for a wild man; such as Ishmael. Those who are born after the flesh, take up with the wilderness of this world, while the children of the promise aim at the heavenly Canaan, and cannot be at rest till they are there. Yet God was with the lad; his outward welfare was owing to this.

22-34 Abimelech felt sure that the promises of God would be fulfilled to Abraham. It is wise to connect ourselves with those who are blessed of God; and we ought to requite kindness to those who have been kind to us. Wells of water are scarce and valuable in eastern countries. Abraham took care to have his title to the well allowed, to prevent disputes in future. No more can be expected from an honest man than that he be ready to do right, as soon as he knows he has done wrong. Abraham, being now in a good neighbourhood, stayed a great while there. There he made, not only a constant practice, but an open profession of his religion. There he called on the name of the Lord, as the everlasting God; probably in the grove he planted, which was his place of prayer. Abraham kept up public worship, in which his neighbours might join. Good men should do all they can to make others so. Wherever we sojourn, we must neither neglect nor be ashamed of the worship of Jehovah.

View All Discussusion for Genesis Chapter 21... 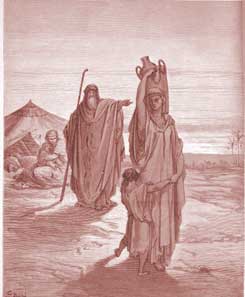 Abraham Sends Hagar and Ishmael Away 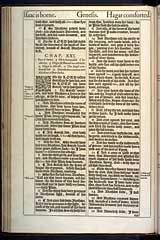