1 And it came to passe in the dayes of Amraphel King of Shinar, Arioch King of Ellasar, Chedorlaomer King of Elam, and Tidal King of nations:

2 That these made warre with Bera King of Sodome, and with Birsha King of Gomorrah, Shinab King of Admah, and Shemeber King of Zeboiim, and the King of Bela, which is Zoar.

3 All these were ioyned together in the vale of Siddim; which is the salt Sea.

4 Twelue yeeres they serued Chedorlaomer, and in the thirteenth yeere they rebelled.

5 And in the fourteenth yeere came Chedorlaomer, and the Kings that were with him, and smote the Rephaims, in Ashteroth Karnaim, & the Zuzims in Ham, and the Emims in Shaueh Kiriathaim;

6 And the Horites in their mount Seir, vnto El-Paran, which is by the wildernesse.

7 And they returned, and came to En-mishpat, which is Kadesh, & smote all the countrey of the Amalekites, and also the Amorites, that dwelt in Hazezon-tamar.

9 With Chedorlaomer the King of Elam, and with Tidal King of nations, and Amraphel King of Shinar, and Arioch King of Ellasar; foure Kings with fiue.

10 And the vale of Siddim was full of slime-pits: and the Kings of Sodome & Gomorrah fled, and fell there: and they that remained, fled to the mountaine.

11 And they tooke all the goods of Sodome and Gomorrah, and all their victuals, and went their way.

12 And they tooke Lot, Abrams brothers sonne, (who dwelt in Sodome) and his goods, and departed.

13 ¶ And there came one that had escaped, and told Abram the Hebrew, for hee dwelt in the plaine of Mamre the Amorite, brother of Eshcol, and brother of Aner: and these were confederate with Abram.

14 And when Abram heard that his brother was taken captiue, he armed his trained seruants borne in his owne house, three hundred and eighteene, and pursued them vnto Dan.

15 And hee diuided himselfe against them, he and his seruants by night, and smote them, and pursued them vnto Hoba, which is on the left hand of Damascus:

16 And hee brought backe all the goods, and also brought againe his brother Lot, and his goods, and the women also, and the people.

17 ¶ And the king of Sodome went out to meete him, (after his returne from the slaughter of Chedorlaomer, and of the Kings that were with him) at the valley of Saueh, which is the Kings dale.

18 And Melchizedek King of Salem brought foorth bread and wine: and he was the Priest of the most high God.

19 And hee blessed him, and saide; Blessed bee Abram of the most high God, possessour of heauen and earth,

20 And blessed bee the most high God, which hath deliuered thine enemies into thy hand: and hee gaue him tithes of all.

21 And the King of Sodome said vnto Abram, giue me the persons, and take the goods to thy selfe.

22 And Abram said to the King of Sodome, I haue lift vp my hand vnto the LORD, the most high God, the possessour of heauen and earth,

23 That I wil not take from a threed euen to a shoe latchet, and that I will not take any thing that is thine, lest thou shouldest say, I haue made Abram rich:

24 Saue onely that which the yong men haue eaten, and the portion of the men which went with mee, Aner, Eschol, and Mamre; let them take their portion.

The battle of the kings, Lot is taken prisoner. (1-12) Abram rescues Lot. (13-16) Melchizedek blesses Abram. (17-20) Abram restores the spoil. (21-24)1-12 The wars of nations make great figure in history, but we should not have had the record of this war if Abram and Lot had not been concerned. Out of covetousness, Lot had settled in fruitful, but wicked Sodom. Its inhabitants were the most ripe for vengeance of all the descendants of Canaan. The invaders were from Chaldea and Persia, then only small kingdoms. They took Lot among the rest, and his goods. Though he was righteous, and Abram's brother's son, yet he was with the rest in this trouble. Neither our own piety, nor our relation to the favourites of Heaven, will be our security when God's judgments are abroad. Many an honest man fares the worse for his wicked neighbours: it is our wisdom to separate, or at least to distinguish ourselves from them, #2Co 6:17|. So near a relation of Abram should have been a companion and a disciple of Abram. If he chose to dwell in Sodom, he must thank himself if he share in Sodom's losses. When we go out of the way of our duty, we put ourselves from under God's protection, and cannot expect that the choice made by our lusts, should end to our comfort. They took Lot's goods; it is just with God to deprive us of enjoyments, by which we suffer ourselves to be deprived of the enjoyment of him.

13-16 Abram takes this opportunity to give a real proof of his being truly friendly to Lot. We ought to be ready to succour those in distress, especially relations and friends. And though others may have been wanting in their duty to us, yet we must not neglect our duty to them. Abram rescued the captives. As we have opportunity, we must do good to all.

17-20 Melchizedek is spoken of as a king of Salem, supposed to be the place afterwards called Jerusalem, and it is generally thought that he was only a man. The words of the apostle, #Heb 7:3|, state only, that the sacred history has said nothing of his ancestors. The silence of the Scriptures on this, is to raise our thoughts to Him, whose generation cannot be declared. Bread and wine were suitable refreshment for the weary followers of Abram; and it is remarkable that Christ appointed the same as the memorials of his body and blood, which are meat and drink indeed to the soul. Melchizedek blessed Abram from God. He blessed God from Abram. We ought to give thanks for other's mercies as for our own. Jesus Christ, our great High Priest, is the Mediator both of our prayers and praises, and not only offers up ours, but his own for us. Abram gave him the tenth of the spoils, #Heb 7:4|. When we have received some great mercy from God, it is very fit we should express our thankfulness by some special act of pious charity. Jesus Christ, our great Melchisedek, is to have homage done him, and to be humbly acknowledged as our King and Priest; not only the tithe of all, but all we have, must be given up to him.

21-24 Observe the king of Sodom's grateful offer to Abram, Give me the souls, and take thou the substance. Gratitude teaches us to recompense to the utmost of our power, those that have undergone fatigues, run hazards, and been at expense for our service and benefit. Abram generously refused this offer. He accompanies his refusal with a good reason, Lest thou shouldest say, I have made Abram rich: which would reflect upon the promise promise and covenant of God, as if He would not have enriched Abraham without the spoils of Sodom. The people of God must, for their credit's sake, take heed of doing any thing that looks mean or mercenary, or that savors of covetousness and self-seeking. Abraham can trust the Possessor of Heaven and earth to provide for him.

View All Discussusion for Genesis Chapter 14... 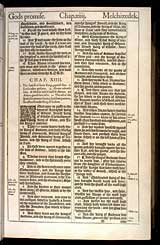