1 Then fourteene yeeres after, I went vp againe to Ierusalem with Barnabas, and tooke Titus with me also.

2 And I went vp by reuelation, and communicated vnto them that Gospel, which I preach among the Gentiles, but priuately to them which were of reputation, lest by any meanes I should runne, or had runne in vaine.

3 But neither Titus, who was with me, being a Greeke, was compelled to be circumcised:

4 And that because of false brethren vnawares brought in, who came in priuily to spie out our libertie, which wee haue in Christ Iesus, that they might bring vs into bondage.

5 To whom wee gaue place by subiection, no not for an houre, that the trueth of the Gospel might continue with you.

8 (For he that wrought effectually in Peter to the Apostleship of the circumcision, the same was mightie in me towards the Gentiles.)

9 And when Iames, Cephas and Iohn, who seemed to bee pillars, perceiued the grace that was giuen vnto me, they gaue to me and Barnabas the right hands of fellowship, that wee should goe vnto the heathen, and they vnto the circumcision.

10 Onely they would that wee should remember the poore, the same which I also was forward to doe.

11 But when Peter was come to Antioch, I withstood him to the face, because he was to be blamed.

12 For before that certaine came from Iames, he did eate with the Gentiles: but when they were come, hee withdrew, and separated himselfe, fearing them which were of the Circumcisiō.

13 And the other Iewes dissembled likewise with him, insomuch that Barnabas also was caried away with their dissimulation.

14 But when I saw that they walked not vprightly according to the truth of the Gospel, I said vnto Peter before them al, If thou, being a Iew, liuest after the maner of Gentiles, and not as doe the Iewes, why compellest thou the Gentiles to liue as do the Iewes?

15 We who are Iewes by nature, and not sinners of the Gentiles,

17 But if while we seeke to be iustified by Christ, wee our selues also are found sinners, is therefore Christ the minister of sinne? God forbid.

18 For if I build againe the things which I destroyed, I make my selfe a transgressour.

19 For I through þe Law, am dead to the Law, that I might liue vnto God.

20 I am crucified with Christ. Neuertheles, I liue, yet not I, but Christ liueth in me, and the life which I now liue in the flesh, I liue by the faith of the sonne of God, who loued mee, and gaue himselfe for me.

21 I doe not frustrate the grace of God: for if righteousnes come by the Lawe, then Christ is dead in vaine.

The apostle declares his being owned as an apostle of the Gentiles. (1-10) He had publicly opposed Peter for judaizing. (11-14) And from thence he enters upon the doctrine of justification by faith in Christ, without the works of the law. (15-21)1-10 Observe the apostle's faithfulness in giving a full account of the doctrine he had preached among the Gentiles, and was still resolved to preach, that of Christianity, free from all mixture of Judaism. This doctrine would be ungrateful to many, yet he was not afraid to own it. His care was, lest the success of his past labours should be lessened, or his future usefulness be hindered. While we simply depend upon God for success to our labours, we should use every proper caution to remove mistakes, and against opposers. There are things which may lawfully be complied with, yet, when they cannot be done without betraying the truth, they ought to be refused. We must not give place to any conduct, whereby the truth of the gospel would be reflected upon. Though Paul conversed with the other apostles, yet he did not receive any addition to his knowledge, or authority, from them. Perceiving the grace given to him, they gave unto him and Barnabas the right hand of fellowship, whereby they acknowledged that he was designed to the honour and office of an apostle as well as themselves. They agreed that these two should go to the heathen, while they continued to preach to the Jews; judging it agreeable to the mind of Christ, so to divide their work. Here we learn that the gospel is not ours, but God's; and that men are but the keepers of it; for this we are to praise God. The apostle showed his charitable disposition, and how ready he was to own the Jewish converts as brethren, though many would scarcely allow the like favour to the converted Gentiles; but mere difference of opinion was no reason to him why he should not help them. Herein is a pattern of Christian charity, which we should extend to all the disciples of Christ.

11-14 Notwithstanding Peter's character, yet, when Paul saw him acting so as to hurt the truth of the gospel and the peace of the church, he was not afraid to reprove him. When he saw that Peter and the others did not live up to that principle which the gospel taught, and which they professed, namely, That by the death of Christ the partition wall between Jew and Gentile was taken down, and the observance of the law of Moses was no longer in force; as Peter's offence was public, he publicly reproved him. There is a very great difference between the prudence of St. Paul, who bore with, and used for a time, the ceremonies of the law as not sinful, and the timid conduct of St. Peter, who, by withdrawing from the Gentiles, led others to think that these ceremonies were necessary.

15-19 Paul, having thus shown he was not inferior to any apostle, not to Peter himself, speaks of the great foundation doctrine of the gospel. For what did we believe in Christ? Was it not that we might be justified by the faith of Christ? If so, is it not foolish to go back to the law, and to expect to be justified by the merit of moral works, or sacrifices, or ceremonies? The occasion of this declaration doubtless arose from the ceremonial law; but the argument is quite as strong against all dependence upon the works of the moral law, as respects justification. To give the greater weight to this, it is added, But if, while we seek to be justified by Christ, we ourselves also are found sinners, is Christ the minister of sin? This would be very dishonourable to Christ, and also very hurtful to them. By considering the law itself, he saw that justification was not to be expected by the works of it, and that there was now no further need of the sacrifices and cleansings of it, since they were done away in Christ, by his offering up himself a sacrifice for us. He did not hope or fear any thing from it; any more than a dead man from enemies. But the effect was not a careless, lawless life. It was necessary, that he might live to God, and be devoted to him through the motives and grace of the gospel. It is no new prejudice, though a most unjust one, that the doctrine of justification by faith alone, tends to encourage people in sin. Not so, for to take occasion from free grace, or the doctrine of it, to live in sin, is to try to make Christ the minister of sin, at any thought of which all Christian hearts would shudder.

20,21 Here, in his own person, the apostle describes the spiritual or hidden life of a believer. The old man is crucified, #Ro 6:6|, but the new man is living; sin is mortified, and grace is quickened. He has the comforts and the triumphs of grace; yet that grace is not from himself, but from another. Believers see themselves living in a state of dependence on Christ. Hence it is, that though he lives in the flesh, yet he does not live after the flesh. Those who have true faith, live by that faith; and faith fastens upon Christ's giving himself for us. He loved me, and gave himself for me. As if the apostle said, The Lord saw me fleeing from him more and more. Such wickedness, error, and ignorance were in my will and understanding, that it was not possible for me to be ransomed by any other means than by such a price. Consider well this price. Here notice the false faith of many. And their profession is accordingly; they have the form of godliness without the power of it. They think they believe the articles of faith aright, but they are deceived. For to believe in Christ crucified, is not only to believe that he was crucified, but also to believe that I am crucified with him. And this is to know Christ crucified. Hence we learn what is the nature of grace. God's grace cannot stand with man's merit. Grace is no grace unless it is freely given every way. The more simply the believer relies on Christ for every thing, the more devotedly does he walk before Him in all his ordinances and commandments. Christ lives and reigns in him, and he lives here on earth by faith in the Son of God, which works by love, causes obedience, and changes into his holy image. Thus he neither abuses the grace of God, nor makes it in vain.

View All Discussusion for Galatians Chapter 2... 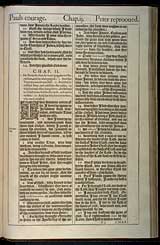