1 Paul an Apostle, not of men, neither by man, but by Iesus Christ, and God the Father, who raised him frō the dead,

2 And all the brethren which are with mee, vnto the Churches of Galatia:

3 Grace bee to you and peace, from God the Father, and from our Lord Iesus Christ,

4 Who gaue himselfe for our sinnes, that he might deliuer vs from this present euill world, according to the will of God, and our Father,

5 To whom bee glorie for euer and euer, Amen.

6 I marueile, that you are so soone remoued from him, that called you into the grace of Christ, vnto an other Gospel:

7 Which is not another; but there bee some that trouble you, and would peruert the Gospel of Christ.

8 But though we, or an Angel from heauen, preach any other Gospel vnto you, then that which wee haue preached vnto you, let him be accursed.

9 As we said before, so say I now againe, If any man preach any other Gospel vnto you, then that yee haue receiued, let him be accursed.

10 For doe I now perswade men, or God? or doe I seeke to please men? For if I yet pleased men, I should not bee the seruant of Christ.

11 But I certifie you, brethren, that the Gospel which was preached of me, is not after man.

12 For I neither receiued it of man, neither was I taught it, but by the reuelation of Iesus Christ.

13 For yee haue heard of my couuersation in time past, in the Iewes Religion, how that beyond measure I persecuted the Church of God, and wasted it:

14 And profited in the Iewes Religion, aboue many my equals in mine owne nation, being more exceedingly zealous of the traditions of my fathers.

15 But when it pleased God, who separated me from my mothers wombe, and called me by his grace,

16 To reueale his sonne in mee, that I might preach him among the heathen, immediatly I conferred not with flesh and blood:

17 Neither went I vp to Ierusalem, to them which were Apostles before me, but I went into Arabia, and returned againe vnto Damascus.

18 Then after three yeeres, I went vp to Ierusalem to see Peter, and abode with him fifteene dayes.

19 But other of the Apostles saw I none, saue Iames the Lords brother.

20 Now the things which I write vnto you, behold, before God I lye not.

21 Afterwards I came into the regions of Syria and Cilicia,

22 And was vnknowen by face vnto the Churches of Iudea, which were in Christ.

23 But they had heard onely, that he which persecuted vs in times past, now preacheth the faith, which once hee destroyed.

24 And they glorified God in me.

The churches in Galatia were formed partly of converted Jews, and partly of Gentile converts, as was generally the case. St. Paul asserts his apostolic character and the doctrines he taught, that he might confirm the Galatian churches in the faith of Christ, especially with respect to the important point of justification by faith alone. Thus the subject is mainly the same as that which is discussed in the epistle to the Romans, that is, justification by faith alone. In this epistle, however, attention is particularly directed to the point, that men are justified by faith without the works of the law of Moses. Of the importance of the doctrines prominently set forth in this epistle, Luther thus speaks: "We have to fear as the greatest and nearest danger, lest Satan take from us this doctrine of faith, and bring into the church again the doctrine of works and of men's traditions. Wherefore it is very necessary that this doctrine be kept in continual practice and public exercise, both of reading and hearing. If this doctrine be lost, then is also the doctrine of truth, life and salvation, lost and gone."The apostle Paul asserts his apostolic character against such as lessened it. (1-5) He reproves the Galatians for revolting from the gospel of Christ under the influence of evil teachers. (6-9) He proves the Divine authority of his doctrine and mission; and declares what he was before his conversion and calling. (10-14) And how he proceeded after it. (15-24)1-5 St. Paul was an apostle of Jesus Christ; he was expressly appointed by him, consequently by God the Father, who is one with him in respect of his Divine nature, and who appointed Christ as Mediator. Grace, includes God's good-will towards us, and his good work upon us; and peace, all that inward comfort, or outward prosperity, which is really needful for us. They come from God the Father, as the Fountain, through Jesus Christ. But observe, first grace, and then peace; there can be no true peace without grace. Christ gave himself for our sins, to make atonement for us: this the justice of God required, and to this he freely submitted. Here is to be observed the infinite greatness of the price bestowed, and then it will appear plainly, that the power of sin is so great, that it could by no means be put away except the Son of God be given for it. He that considers these things well, understands that sin is a thing the most horrible that can be expressed; which ought to move us, and make us afraid indeed. Especially mark well the words, "for our sins." For here our weak nature starts back, and would first be made worthy by her own works. It would bring him that is whole, and not him that has need of a physician. Not only to redeem us from the wrath of God, and the curse of the law; but also to recover us from wicked practices and customs, to which we are naturally enslaved. But it is in vain for those who are not delivered from this present evil world by the sanctification of the Spirit, to expect that they are freed from its condemnation by the blood of Jesus.

6-9 Those who would establish any other way to heaven than what the gospel of Christ reveals, will find themselves wretchedly mistaken. The apostle presses upon the Galatians a due sense of their guilt in forsaking the gospel way of justification; yet he reproves with tenderness, and represents them as drawn into it by the arts of some that troubled them. In reproving others, we should be faithful, and yet endeavour to restore them in the spirit of meekness. Some would set up the works of the law in the place of Christ's righteousness, and thus they corrupted Christianity. The apostle solemnly denounces, as accursed, every one who attempts to lay so false a foundation. All other gospels than that of the grace of Christ, whether more flattering to self-righteous pride, or more favourable to worldly lusts, are devices of Satan. And while we declare that to reject the moral law as a rule of life, tends to dishonour Christ, and destroy true religion, we must also declare, that all dependence for justification on good works, whether real or supposed, is as fatal to those who persist in it. While we are zealous for good works, let us be careful not to put them in the place of Christ's righteousness, and not to advance any thing which may betray others into so dreadful a delusion.

10-14 In preaching the gospel, the apostle sought to bring persons to the obedience, not of men, but of God. But Paul would not attempt to alter the doctrine of Christ, either to gain their favour, or to avoid their fury. In so important a matter we must not fear the frowns of men, nor seek their favour, by using words of men's wisdom. Concerning the manner wherein he received the gospel, he had it by revelation from Heaven. He was not led to Christianity, as many are, merely by education.

15-24 St. Paul was wonderfully brought to the knowledge and faith of Christ. All who are savingly converted, are called by the grace of God; their conversion is wrought by his power and grace working in them. It will but little avail us to have Christ revealed to us, if he is not also revealed in us. He instantly prepared to obey, without hesitating as to his worldly interest, credit, ease, or life itself. And what matter of thanksgiving and joy is it to the churches of Christ, when they hear of such instances to the praise of the glory of his grace, whether they have ever seen them or not! They glorify God for his power and mercy in saving such persons, and for all the service to his people and cause that is done, and may be further expected from them.

View All Discussusion for Galatians Chapter 1... 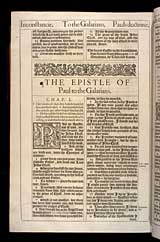