1 Now in the first yeere of Cyrus King of Persia, (that the word of the Lord by the mouth of Ieremiah, might be fulfilled) þe Lord stirred vp the spirit of Cyrus king of Persia, that he made a proclamation throughout all his kingdome, and put it also in writing, saying;

2 Thus sayth Cyrus king of Persia, The Lord God of heauen hath giuen mee all the kingdomes of the earth, and he hath charged me to build him an house at Ierusalem, which is in Iudah.

3 Who is there among you of all his people? his God be with him, and let him goe vp to Ierusalem, which is in Iudah, and build the house of the Lord God of Israel (He is the God) which is in Ierusalem.

4 And whosoeuer remaineth in any place where hee soiourneth, let the men of his place helpe him with siluer, and with golde, and with goods, and with beasts, besides the free-will offering for the house of God that is in Ierusalem.

5 ¶ Then rose vp the chiefe of the fathers of Iudah and Beniamin, and the Priests, and the Leuites, with all them whose spirit God had raised to goe vp, to build the house of the Lord which is in Ierusalem.

6 And all they that were about them, strengthened their hands with vessels of siluer, with golde, with goods, and with beasts, and with precious things; besides all that was willingly offered.

8 Euen those did Cyrus king of Persia bring foorth, by the hand of Mithredath the treasurer, and numbred them vnto Sheshbazzar the Prince of Iudah.

9 And this is the number of them: thirtie chargers of golde, a thousand chargers of siluer, nine and twentie kniues:

10 Thirtie basins of golde: siluer basins of a second sort, foure hundred and ten: and other vessels a thousand.

11 All the vessels of golde and of siluer, were fiue thousand and foure hundred. All these did Sheshbazzar bring vp with them of the captiuitie, that were brought vp from Babylon vnto Ierusalem.

The history of this book is the accomplishment of Jeremiah's prophecy concerning the return of the Jews out of Babylon. From its contents we especially learn, that every good work will meet with opposition from enemies, and be hurt by the misconduct of friends; but that God will make his cause to prevail, notwithstanding all obstacles and adversaries. The restoration of the Jews was an event of the highest consequence, tending to preserve religion in the world, and preparing the way for the appearance of the Great Deliverer, the Lord Jesus Christ.The proclamation of Cyrus for the rebuilding of the temple. (1-4) The people provide for their return. (5-11)1-4 The Lord stirred up the spirit of Cyrus. The hearts of kings are in the hand of the Lord. God governs the world by his influence on the spirits of men; whatever good they do, God stirs up their spirits to do it. It was during the captivity of the Jews, that God principally employed them as the means of calling the attention of the heathen to him. Cyrus took it for granted, that those among the Jews who were able, would offer free-will offerings for the house of God. He would also have them supplied out of his kingdom. Well-wishers to the temple should be well-doers for it.

5-11 The same God that raised up the spirit of Cyrus to proclaim liberty to the Jews, raised up their spirits to take the benefit. The temptation was to some to stay in Babylon; but some feared not to return, and they were those whose spirits God raised, by his Spirit and grace. Whatever good we do, is owing to the grace of God. Our spirits naturally bow down to this earth and the things of it; if they move upward in any good affections or good actions, it is God who raises them. The calls and offers of the gospel are like the proclamation of Cyrus. Those bound under the power of sin, may be made free by Jesus Christ. Whosoever will, by repentance and faith, return to God, Jesus Christ has opened the way for him, and raises him out of the slavery of sin into the glorious liberty of the children of God. Many that hear this joyful sound, choose to sit still in Babylon, are in love with their sins, and will not venture upon a holy life; but some break through all discouragements, whatever it cost them; they are those whose spirit God has raised above the world and the flesh, whom he has made willing. Thus will the heavenly Canaan be filled, though many perish in Babylon; and the gospel offer will not have been made in vain. The bringing back the Jews from captivity, represents the redemption of sinners by Jesus Christ.

View All Discussusion for Ezra Chapter 1... 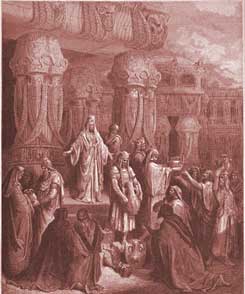 Cyrus Restores the Vessels of the Temple 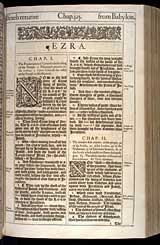