2 Then brought hee me out of the way of the gate Northward, and ledde me about the way without vnto the vtter gate by the way that looketh Eastward, and behold, there ranne out waters on the right side.

3 And when the man that had the line in his hand, went forth Eastward, he measured a thousand cubites, and he brought me through the waters: the waters were to the ancles.

5 Afterward hee measured a thousand, and it was a riuer, that I could not passe ouer: for the waters were risen, waters to swimme in, a riuer that could not be passed ouer.

6 ¶ And hee said vnto me, Sonne of man, hast thou seene this? Then hee brought me, and caused me to returne to the brinke of the riuer.

7 Now when I had returned, behold, at the banke of the riuer were very many trees on the one side and on the other.

8 Then said he vnto me, These waters issue out toward the East country, and go downe into the desert, and goe into the sea: which being brought foorth into the sea, the waters shalbe healed.

10 And it shall come to passe that the fishers shall stand vpon it, from Engedi euen vnto En-eglaim; they shall be a place to spread foorth nets, their fish shall bee according to their kindes, as the fish of the great Sea, exceeding many.

11 But the myrie places thereof, and the marishes thereof, shall not be healed, they shall be giuen to salt.

12 And by the riuer vpon the banke thereof on this side, and on that side, shall grow all trees for meat, whose leafe shal not fade, neither shal the fruit thereof be consumed: it shall bring forth new fruit, according to his moneths, because their waters they issued out of the Sanctuarie, and the fruite thereof shall be for meate, and the leafe thereof for medicine.

13 ¶ Thus sayth the Lord God, This shall be the border, whereby yee shall inherite the land, according to the twelue tribes of Israel: Ioseph shall haue two portions.

14 And yee shall inherite it, one as well as an other: concerning the which I lifted vp mine hand to giue it vnto your fathers, and this land shal fall vnto you for inheritance.

15 And this shall be the border of the land toward the North side from the great Sea, the way of Hethlon, as men goe to Zedad:

20 The West side also shall be the great Sea from the border, till a man come ouer against Hamath: this is the West side.

21 So shall yee diuide this land vnto you according to the Tribes of Israel.

23 And it shall come to passe that in what Tribe the stranger soiourneth, there shall yee giue him his inheritance, saith the Lord God.

These waters signify the gospel of Christ, which went forth from Jerusalem, and spread into the countries about; also the gifts and powers of the Holy Ghost which accompanied it, by virtue of which is spread far, and produced blessed effects. Christ is the Temple; and he is the Door; from him the living waters flow, out of his pierced side. They are increasing waters. Observe the progress of the gospel in the world, and the process of the work of grace in the heart; attend the motions of the blessed Spirit under Divine guidance. If we search into the things of God, we find some things plain and easy to be understood, as the waters that were but to the ankles; others more difficult, which require a deeper search, as the waters to the knees, or the loins; and some quite beyond our reach, which we cannot penetrate; but must, as St. Paul did, adore the depth, #Ro 11|. It is wisdom to begin with that which is most easy, before we proceed to that which is dark and hard to be understood. The promises of the sacred word, and the privileges of believers, as shed abroad in their souls by the quickening Spirit, abound where the gospel is preached; they nourish and delight the souls of men; they never fade nor wither, nor are exhausted. Even the leaves serve as medicines to the soul: the warnings and reproofs of the word, though less pleasant than Divine consolations, tend to heal the diseases of the soul. All who believe in Christ, and are united to him by his sanctifying Spirit, will share the privileges of Israelites. There is room in the church, and in heaven, for all who seek the blessings of that new covenant of which Christ is Mediator.

View All Discussusion for Ezekiel Chapter 47... 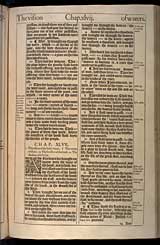