4 So he measured the length therof twentie cubites, and the bredth twentie cubites before the temple, and he said vnto me; This is the most holy place.

5 After he measured the wall of the house sixe cubites, and the bredth of euerie side-chamber foure cubites round about the house on euery side.

6 And the side-chambers were three, one ouer an other, and thirtie in order, and they entred into the wall which was of the house for the side chambers round about, that they might haue hold, but they had not hold in the wall of the house.

8 I saw also the height of the house round about; the foundations of the side-chambers were a full reede of sixe great cubites.

9 The thicknesse of the wall which was for the side chamber without, was fiue cubites, and that which was left, was the place of the side-chambers that were within.

10 And betweene the chambers was the widenesse of twentie cubites round about the house on euery side.

12 Now the building that was before the seperate place, at the end toward the West, was seuenty cubites broad, and the wall of the building was fiue cubites thicke round about, and the length thereof ninety cubites.

14 Also the bredth of the face of the house, and of the separate place toward the East, an hundreth cubites.

15 And he measured the length of the building ouer against the separate place which was behind it, and the galleries thereof on the one side, and on the other side an hundreth cubites with the inner temple, and the porches of the court.

16 The doore-posts and the narrow windows, and the galleries round about on their three stories, ouer against the doore sieled with wood round about, and from the ground vp to the windows, & the windows were couered.

17 To that aboue the doore, euen vnto the inner house and without, and by all the wall round about within and without by measure.

18 And it was made with Cherubims and Palme trees, so that a Palme tree was betweene a Cherub and a Cherub, and euery Cherub had two faces.

20 From the ground vnto aboue the doore were Cherubims and Palme-trees made, & on the wall of the temple.

23 And the Temple and the Sanctuarie had two doores.

25 And there were made on them, on the doores of the Temple, Cherubims and Palme-trees, like as were made vpon the walles, and there were thicke planckes vpon the face of the porch without.

26 And there were narrow windowes and Palme-trees on the one side and on the other side, on the sides of the porch, and vpon the side chambers of the house, and thicke plankes.

After the prophet had observed the courts, he was brought to the temple. If we attend to instructions in the plainer parts of religion, and profit by them, we shall be led further into an acquaintance with the mysteries of the kingdom of heaven.

View All Discussusion for Ezekiel Chapter 41... 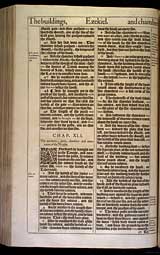