1 And the word of þe Lord came vnto me, saying;

3 Yee eate the fat, and ye clothe you with the wooll, yee kill them that are fed: but ye feede not the flocke.

6 My sheepe wandered through all the mountaines, and vpon euery high hill: yea my flocke was scattered vpon all the face of the earth, and none did search or seeke after them.

7 ¶ Therefore, yee shepheards, heare the word of the Lord.

9 Therefore, O yee shepheards, heare the word of the Lord.

10 Thus saith the Lord God, Behold, I am against the shepheards, and I will require my flocke at their hand, and cause them to cease from feeding the flocke, neither shall the shepheards feede themselues any more: for I will deliuer my flock from their mouth, that they may not be meat for them.

11 ¶ For thus saith the Lord God, Behold, I, euen I will both search my sheepe, and seeke them out.

12 As a shepheard seeketh out his flocke in the day that hee is among his sheepe that are scattered: so wil I seeke out my sheep, and will deliuer them out of all places, where they haue bene scattered in the cloudie and darke day.

15 I will feed my flocke, and I will cause them to lie downe, saith the Lord God.

17 And as for you, O my flocke, thus saith the Lord God, Behold, I iudge betweene cattell and cattell, betweene the rammes and the hee goates.

18 Seemeth it a small thing vnto you, to haue eaten vp the good pasture, but ye must tread downe with your feet the residue of your pastures? and to haue drunke of the deepe waters, but yee must fonle the residue with your feete?

20 ¶ Therefore thus saith the Lord God vnto them, Behold, I, euen I will iudge betweene the fat cattell, and betweene the leane cattell.

21 Because yee haue thrust with side and with shoulder, and pusht all the diseased with your hornes, till yee haue scattered them abroad:

22 Therefore will I saue my flocke, and they shall no more be a pray, and I will iudge betweene cattell and cattell.

24 And I the Lord will be their God, and my seruant Dauid a prince among them, I the Lord haue spoken it.

25 And I will make with them a couenant of peace, and will cause the euill beasts to cease out of the land: and they shall dwell safely in the wildernesse, and sleepe in the woods.

26 And I will make them and the places round about my hill, a blessing; and I will cause the showre to come downe in his season: there shall bee showres of blessing.

27 And the tree of the field shal yeeld her fruite, and the earth shall yeeld her increase, and they shall be safe in their land, and shall know that I am the Lord, when I haue broken the bands of their yoke, and deliuered them out of the hand of those that serued themselues of them.

28 And they shall no more be a pray to the heathen, neither shall the beasts of the land deuoure them; but they shall dwell safely, and none shall make them afraide.

29 And I will raise vp for them a plant of renowne, and they shall be no more consumed with hunger in the land, neither beare the shame of the heathen any more.

30 Thus shall they know that I the Lord their God am with them, and that they, euen the house of Israel, are my people, saith the Lord God.

31 And yee my flocke of my pasture, are men, and I am your God, saith the Lord God.

The rulers reproved. (1-6) The people are to be restored to their own land. (7-16) The kingdom of Christ. (17-31)1-6 The people became as sheep without a shepherd, were given up as a prey to their enemies, and the land was utterly desolated. No rank or office can exempt from the reproofs of God's word, men who neglect their duty, and abuse the trust reposed in them.

7-16 The Lord declared that he intended mercy towards the scattered flock. Doubtless this, in the first place, had reference to the restoration of the Jews. It also represented the good Shepherd's tender care of the souls of his people. He finds them in their days of darkness and ignorance, and brings them to his fold. He comes to their relief in times of persecution and temptation. He leads them in the ways of righteousness, and causes them to rest on his love and faithfulness. The proud and self-sufficient, are enemies of the true gospel and of believers; against such we must guard. He has rest for disquieted saints, and terror for presumptuous sinners.

17-31 The whole nation seemed to be the Lord's flock, yet they were very different characters; but he knew how to distinguish between them. By good pastures and deep waters, are meant the pure word of God and the dispensing of justice. The latter verses, #23-31|, prophesy of Christ, and of the most glorious times of his church on earth. Under Him, as the good Shepherd, the church would be a blessing to all around. Christ, though excellent in himself, was as a tender plant out of a dry ground. Being the Tree of life, bearing all the fruits of salvation, he yields spiritual food to the souls of his people. Our constant desire and prayer should be, that there may be showers of blessings in every place where the truth of Christ is preached; and that all who profess the gospel may be filled with fruits of righteousness.

View All Discussusion for Ezekiel Chapter 34... 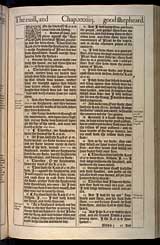