1 Moreouer, take thou vp a lamentation for the princes of Israel,

2 And say, What is thy mother? a lyonesse: shee lay downe among lions, she nourished her whelpes among yong lions.

3 And shee brought vp one of her whelps: it became a yong lion, & it learned to catch the pray, it deuoured men.

4 The nations also heard of him, hee was taken in their pit, and they brought him with chaines vnto the land of Egypt.

5 Now when she saw that shee had waited, and her hope was lost, then she tooke another of her whelps, and made him a yong lion.

6 And he went vp and downe among the lions, he became a yong lion, and learned to catch the pray, and deuoured men.

7 And he knew there desolate palaces, and he laied waste their cities, and the land was desolate, and the fulnesse thereof by the noise of his roaring.

8 Then the nations set against him on euery side from the prouinces, and spread their net ouer him: he was taken in their pit.

9 And they put him in ward in chaines, and brought him to the king of Babylon, they brought him into holds, that his voyce should no more be heard vpon the mountaines of Israel.

10 ¶ Thy mother is like a vine in thy blood, planted by the waters, she was fruitfull and full of branches by reason of many waters,

11 And she had strong rods for the scepters of them that beare rule, and her stature was exalted among the thicke branches, & she appeared in her height with the multitude of her branches.

12 But she was plucked vp in fury: she was cast downe to the ground, and the East wind dryed vp her fruite: her strong rods were broken and withered, the fire consumed them.

13 And now she is planted in the wildernesse, in a dry and thirsty ground.

14 And fire is gone out of a rod of her branches, which hath deuoured her fruite, so that she hath no strong rod to be a scepter to rule: this is a lamentation, and shall be for a lamentation.

A parable lamenting the ruin of Jehoahaz and Jehoiakim. (1-9) Another describing the desolation of the people. (10-14)1-9 Ezekiel is to compare the kingdom of Judah to a lioness. He must compare the kings of Judah to a lion's whelps; they were cruel and oppressive to their own subjects. The righteousness of God is to be acknowledged, when those who have terrified and enslaved others, are themselves terrified and enslaved. When professors of religion form connexions with ungodly persons, their children usually grow up following after the maxims and fashions of a wicked world. Advancement to authority discovers the ambition and selfishness of men's hearts; and those who spend their lives in mischief, generally end them by violence.

10-14 Jerusalem was a vine, flourishing and fruitful. This vine is now destroyed, though not plucked up by the roots. She has by wickedness made herself like tinder to the sparks of God's wrath, so that her own branches serve as fuel to burn her. Blessed be God, one Branch of the vine here alluded to, is not only become a strong rod for the sceptre of those that rule, but is Himself the true and living Vine. This shall be for a rejoicing to all the chosen people of God throughout all generations.

View All Discussusion for Ezekiel Chapter 19... 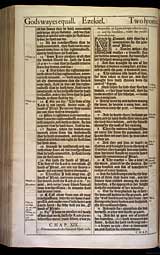