1 And the word of the Lord came vnto mee, saying,

2 Sonne of man, put foorth a riddle, and speake a parable vnto the house of Israel,

3 And say, Thus saith the Lord God, A great eagle with great wings, long wing'd, full of feathers, which had diuers colours, camevnto Lebanon, and tooke the highest branch of the Cedar.

4 Hee cropt off the top of his yong twigs, and caried it into a land of traffique; he set it in a city of merchants.

5 Hee tooke also of the seed of the land, and planted it in a fruitfull field, he placed it by great waters, and set it as a willow tree.

6 And it grew, and became a spreading Uine of low stature, whose branches turned toward him, and the roots thereof were vnder him: so it became a Uine, and brought forth branches, and shot foorth sprigges.

7 There was also an other great eagle, with great wings and many feathers, and behold, this Uine did bend her rootes towards him, and shot forth her branches toward him, that hee might water it by the furrowes of her plantation.

9 Say thou, Thus saith the Lord God; Shall it prosper? shall he not pull vp the rootes thereof, and cut off the fruit thereof, that it wither? it shall wither in all the leaues of her spring, euen without great power, or many people to plucke it vp by the rootes thereof.

10 Yea behold, being planted, shall it prosper? shall it not vtterly wither, when the East wind toucheth it? it shal wither in the furrowes where it grew.

11 ¶ Moreouer the word of the Lord came vnto me, saying,

12 Say now to the rebellious house, Know ye not what these things meane? tell them, behold, the king of Babylon is come to Ierusalem, and hath taken the King thereof, and the Princes thereof, and ledde them with him to Babylon,

13 And hath taken of the kings seed, and made a couenant with him, and hath taken an oath of him: he hath also taken the mighty of the land,

15 But he rebelled against him in sending his ambassadours into Egypt, that they might giue him horses and much people: shall he prosper? shall he escape that doeth such things? or shall hee breake the Couenant, and bee deliuered?

16 As I liue, saith the Lord God, surely in the place where the king dwelleth that made him king, whose oath he despised, and whose couenant he brake, euen with him, in the midst of Babylon he shall die.

17 Neither shall Pharaoh with his mightie armie and great companie make for him in the warre by casting vp mounts, and building forts, to cut off many persons.

18 Seeing hee despised the oath by breaking the couenant (when loe, he had giuen his hand) and hath done all these things, he shall not escape.

19 Therefore thus saith the Lord God, As I liue, surely mine oath that he hath despised, and my Couenant that he hath broken, euen it will I recompense vpon his owne head.

20 And I will spread my net vpon him, & he shalbe taken in my snare, and I will bring him to Babylon, and will plead with him there for his trespasse, that he hath trespassed against me.

21 And all his fugitiues, with all his bands, shall fall by the sword, and they that remaine shalbe scattered towards all windes: and ye shall know that I the Lord haue spoken it.

22 ¶ Thus saith the Lord God, I wil also take of the highest branch of the high Cedar, and will set it, I will croppe off from the top of his yong twigges a tender one, and will plant it vpon an high mountaine and eminent.

23 In the mountaine of the height of Israel will I plant it: and it shall bring foorth boughes, and beare fruite, and be a goodly Cedar, and vnder it shall dwell all foule of euery wing: in the shadow of the branches thereof shal they dwell.

A parable relative to the Jewish nation. (1-10) to which an explanation is added. (11-21) A direct promise of the Messiah. (22-24)1-10 Mighty conquerors are aptly likened to birds or beasts of prey, but their destructive passions are overruled to forward God's designs. Those who depart from God, only vary their crimes by changing one carnal confidence for another, and never will prosper.

11-21 The parable is explained, and the particulars of the history of the Jewish nation at that time may be traced. Zedekiah had been ungrateful to his benefactor, which is a sin against God. In every solemn oath, God is appealed to as a witness of the sincerity of him that swears. Truth is a debt owing to all men. If the professors of the true religion deal treacherously with those of a false religion, their profession makes their sin the worse; and God will the more surely and severely punish it. The Lord will not hold those guiltless who take his name in vain; and no man shall escape the righteous judgment of God who dies under unrepented guilt.

22-24 The unbelief of man shall not make the promise of God of none effect. The parable of a tree, used in the threatening, is here presented in the promise. It appears only applicable to Jesus, the Son of David, the Messiah of God. The kingdom of Satan, which has borne so long, so large a sway, shall be broken, and the kingdom of Christ, which was looked upon with contempt, shall be established. Blessed be God, our Redeemer is seen even by the ends of the earth. We may find refuge from the wrath to come, and from every enemy and danger, under his shadow; and believers are fruitful in him.

View All Discussusion for Ezekiel Chapter 17... 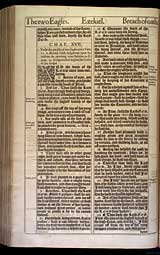