1 Then the Lord said vnto Moses, Goe in vnto Pharaoh, and tell him, Thus saith the Lord God of the Hebrewes, Let my people goe, that they may serue me.

2 For if thou refuse to let them goe, and wilt hold them still,

3 Behold, the hand of the Lord is vpon thy cattell which is in the field, vpon the horses, vpon the asses, vpon the camels, vpon the oxen, and vpon the sheepe: there shall be a very grieuous murraine.

5 And the Lord appointed a set time, saying, To morrow the Lord shall doe this thing in the land.

7 And Pharaoh sent, and beholde, there was not one of the cattell of the Israelites dead. And the heart of Pharaoh was hardened, and he did not let the people goe.

8 ¶ And the Lord saide vnto Moses, and vnto Aaron, Take to you handfuls of ashes of the fornace, and let Moses sprinkle it towards the heauen, in the sight of Pharaoh:

10 And they tooke ashes of the fornace, and stood before Pharaoh, and Moses sprinkled it vp toward heauen: and it became a boile breaking forth with blaines, vpon man and vpon beast.

11 And the Magicians could not stand before Moses, because of the boiles: for the boile was vpon the magicians, and vpon all the Egyptians.

12 And the Lord hardened the heart of Pharaoh, and hee hearkened not vnto them, as the Lord had spoken vnto Moses.

13 ¶ And the Lord saide vnto Moses, Rise vp earely in the morning, and stand before Pharaoh, and say vnto him, Thus saith the Lord God of the Hebrewes, Let my people goe, that they may serue me.

14 For I will at this time send all my plagues vpon thine heart, and vpon thy seruants, and vpon thy people: that thou mayest knowe that there is none like me in all the earth.

15 For now I will stretch out my hand, that I may smite thee and thy people, with pestilence, and thou shalt be cut off from the earth.

16 And in very deede, for this cause haue I raised thee vp, for to shewe in thee my power, and that my name may be declared throughout all the earth.

17 As yet exaltest thou thy selfe against my people, that thou wilt not let them goe?

18 Behold, to morrow about this time, I wil cause it to raine a very grieuous haile, such as hath not bene in Egypt, since the foundation thereof euen vntill now.

19 Send therefore now, and gather thy cattell, and all that thou hast in the field: for vpon euery man and beast which shal be found in the field, and shal not bee brought home, the haile shall come downe vpon them, and they shall die.

20 Hee that feared the word of the Lord amongst the seruants of Pharaoh, made his seruants and his cattell flee into the houses.

21 And he that regarded not the word of the Lord, left his seruants and his cattell in the field.

22 ¶ And the Lord saide vnto Moses, Stretch forth thine hand toward heauen, that there may be haile in all the land of Egypt, vpon man and vpon beast, and vpon euery herbe of the field, thorowout the land of Egypt.

23 And Moses stretched foorth his rod toward heauen, and the Lord sent thunder and haile, and the fire ranne along vpon the ground, and the Lord rained haile vpon the land of Egypt.

24 So there was haile, and fire mingled with the haile, very grieuous, such as there was none like it in all the land of Egypt, since it became a nation.

26 Onely in the land of Goshen where the children of Israel were, was there no haile.

27 ¶ And Pharaoh sent, and called for Moses and Aaron, and said vnto them, I haue sinned this time: the Lord is righteous, and I and my people are wicked.

28 Entreat the Lord, (for it is enough) that there be no more mighty thunderings and haile, and I will let you goe, and ye shall stay no longer.

29 And Moses saide vnto him, Assoone as I am gone out of the citie, I will spread abroad my hands vnto the Lord, and the thunder shall cease, neither shall there be any more haile: that thou mayest know how that the earth is the Lords.

30 But as for thee and thy seruants, I know that ye will not yet feare the Lord God.

32 But the wheat and the rye were not smitten: for they were not growen vp.

33 And Moses went out of the city from Pharaoh, and spread abroad his hands vnto the Lord: and the thunders and haile ceased, and the raine was not powred vpon the earth.

34 And when Pharaoh saw that the raine, and the haile and the thunders were ceased, hee sinned yet more, and hardened his heart, he and his seruants.

35 And the heart of Pharaoh was hardened, neither would he let the children of Israel goe, as the Lord had spoken by Moses.

The murrain of beasts. (1-7) The plague of boils and blains. (8-12) The plague of hail threatened. (13-21) The plague of hail inflicted. (22-35)1-7 God will have Israel released, Pharaoh opposes it, and the trial is, whose word shall stand. The hand of the Lord at once is upon the cattle, many of which, some of all kinds, die by a sort of murrain. This was greatly to the loss of the owners; they had made Israel poor, and now God would make them poor. The hand of God is to be seen, even in the sickness and death of cattle; for a sparrow falls not to the ground without our Father. None of the Israelites' cattle should die; the Lord shall sever. The cattle died. The Egyptians worshipped their cattle. What we make an idol of, it is just with God to remove from us. This proud tyrant and cruel oppressor deserved to be made an example by the just Judge of the universe. None who are punished according to what they deserve, can have any just cause to complain. Hardness of heart denotes that state of mind upon which neither threatenings nor promise, neither judgements nor mercies, make any abiding impression. The conscience being stupified, and the heart filled with pride and presumption, they persist in unbelief and disobedience. This state of mind is also called the stony heart. Very different is the heart of flesh, the broken and contrite heart. Sinners have none to blame but themselves, for that pride and ungodliness which abuse the bounty and patience of God. For, however the Lord hardens the hearts of men, it is always as a punishment of former sins.

8-12 When the Egyptians were not wrought upon by the death of their cattle, God sent a plague that seized their own bodies. If lesser judgments do not work, God will send greater. Sometimes God shows men their sin in their punishment. They had oppressed Israel in the furnaces, and now the ashes of the furnace are made a terror to them. The plague itself was very grievous. The magicians themselves were struck with these boils. Their power was restrained before; but they continued to withstand Moses, and to confirm Pharaoh in his unbelief, till they were forced to give way. Pharaoh continued obstinate. He had hardened his own heart, and now God justly gave him up to his own heart's lusts, permitting Satan to blind and harden him. If men shut their eyes against the light, it is just with God to close their eyes. This is the sorest judgment a man can be under out of hell.

13-21 Moses is here ordered to deliver a dreadful message to Pharaoh. Providence ordered it, that Moses should have a man of such a fierce and stubborn spirit as this Pharaoh to deal with; and every thing made it a most signal instance of the power of God has to humble and bring down the proudest of his enemies. When God's justice threatens ruin, his mercy at the same time shows a way of escape from it. God not only distinguished between Egyptians and Israelites, but between some Egyptians and others. If Pharaoh will not yield, and so prevent the judgment itself, yet those that will take warning, may take shelter. Some believed the things which were spoken, and they feared, and housed their servants and cattle, and it was their wisdom. Even among the servants of Pharaoh, some trembled at God's word; and shall not the sons of Israel dread it? But others believed not, and left their cattle in the field. Obstinate unbelief is deaf to the fairest warnings, and the wisest counsels, which leaves the blood of those that perish upon their own heads.

22-35 Woful havoc this hail made: it killed both men and cattle; the corn above ground was destroyed, and that only preserved which as yet was not come up. The land of Goshen was preserved. God causes rain or hail on one city and not on another, either in mercy or in judgment. Pharaoh humbled himself to Moses. No man could have spoken better: he owns himself wrong; he owns that the Lord is righteous; and God must be justified when he speaks, though he speaks in thunder and lightning. Yet his heart was hardened all this while. Moses pleads with God: though he had reason to think Pharaoh would repent of his repentance, and he told him so, yet he promises to be his friend. Moses went out of the city, notwithstanding the hail and lightning which kept Pharaoh and his servants within doors. Peace with God makes men thunder-proof. Pharaoh was frightened by the tremendous judgment; but when that was over, his fair promises were forgotten. Those that are not bettered by judgments and mercies, commonly become worse.

View All Discussusion for Exodus Chapter 9... 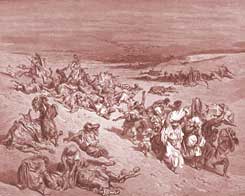 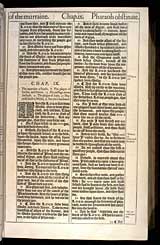